The punishment may not quite fit a crime committed at an Ohio coffee shop, but the owner isn’t all that concerned.

After a thief was recently caught on a surveillance camera stealing from the tip jar at Nervous Dog Coffee Bar & Roaster in Stow, the shop knew it could file a police report, but decided to take a different route. Instead, Nervous Dog chose to host a food drive for the guy at its two locations, WKYC reported. 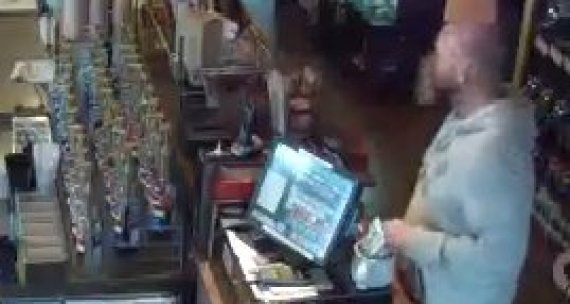 The staff figured that anyone who has to resort to stealing a few dollars from a low-paid server must be pretty down and out.

So the store took to its Facebook page to announce that it would be collecting food items for the man.

The first person to make a donation was the barista from whom the thief stole.

The man in question still hasn’t been identified, and if he doesn’t come forward the shop said that it will give the collected items to the Akron Food Bank.

While some lauded Nervous Dog’s generous response, others felt that the thief doesn’t deserve such a kind gesture.

“I hope this is a joke,” one Facebook commenter wrote. “Why would you support someone who steals? Being poor is not an exscuse [sic] to rob people.”

The initiative certainly isn’t a joke, and a number of other open-minded people around the country have also found it in their hearts to help out someone who had to stoop to stealing.

When Jessica Robles had nothing to feed her three kids, she made the desperate decision in October to shoplift $300 worth of groceries from a Miami supermarket, WSVN reported. Officer Vicki Thomas caught the struggling mom in the act, but once Robles shared her story, the cop decided to help out.

Thomas charged her with a misdemeanor and a notice to appear in court, but then also bought Robles $100 worth of groceries.

"The only thing I asked of her is, when she gets on her feet, that she help someone else out," Thomas told the news outlet, "and she said she would."

What This Coffee Shop Did After A Thief Stole From The Tip Jar Is Nothing Short Of Amazing
People Receive The Best News Ever
1 / 15
World War II Savior Reunited With Children He Rescued
This BBC TV show "That's Life" that aired in 1988 connected Sir Nicholas Winton with some of the lives he saved during World War II. In an operation called <a href="http://storify.com/storyvault/the-c" target="_hplink">Czech Kindertransport</a> Winton organized the rescue and safe passage of about 669 Jewish children who were designated for transport to Nazi concentration camps. In the clip, one of the children, Vera Gissing, embraces Winton and thanks him for saving her life.