When the owners of Cocoa Cinnamon decided to open up a second coffee shop in Durham, North Carolina, they didn't max out credit cards, withdraw from retirement accounts, or take on a high-cost loan. Instead, Cocoa Cinnamon turned to a crowdfunding platform called Community Sourced Capital to obtain a no-interest loan from the people who know its business best.

Obtaining financing from traditional lenders, especially low-interest business loans, is often challenging for small businesses. Over the past several years, however, small businesses like Cocoa Cinnamon have turned to alternative options to raise money.

"You think about small-business financing, after 2008 it was a totally different ballgame," says Leon Grodski de Barrera, co-owner of Cocoa Cinnamon with his wife, Areli. "Banks basically kind of froze up. People had to come up with really innovative ways to get funding, and crowdfunding became one element of that."

Through CSC's online crowdfunding platform, small-business owners can obtain loans with zero interest, ranging from $5,000 to $50,000 and funded by family, friends, customers and community members who want to see the business succeed.

Since 2013, CSC has facilitated 96 loans totaling more than $1.93 million to community businesses in nine states. Most of its campaigns have been in Washington and Oregon. The company has received strong support from Craft3, a Washington-based nonprofit community development financial institution, which matches every dollar raised on the platform. 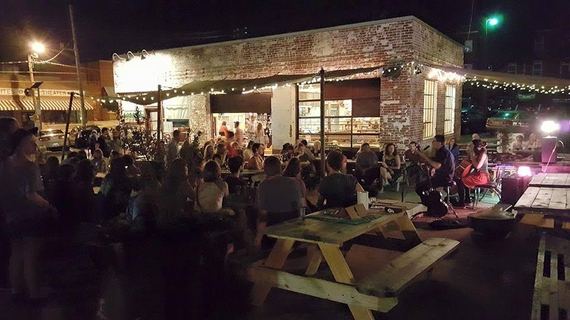 Anyone can participate in funding a loan by buying a "square" for $50; you can buy up to $1,000 worth of squares for each campaign. Loans come with repayment terms of three years or less, although businesses can repay the loans faster without penalty, according to CSC Chief Executive Rachel Maxwell. There's no guarantee squares will be repaid, so lenders should not contribute more than they can afford to lose.

Cocoa Cinnamon ended up raising just over $50,000 from 371 supporters in the CSC campaign in spring 2015. The loan covers a portion of the startup's costs for the second coffee shop and will be repaid over three years.

The company also previously raised $32,325 on the rewards crowdfunding platform Kickstarter to help open its first location, as well as a $10,000 low-cost peer-to-peer loan from Slow Money NC, according to Grodski de Barrera.

"Crowdfunding does a couple of things," Grodski de Barrera says. "It shows the support we have, and it helps get other people interested."

CSC reviews each applicant's campaign to check for "financial integrity and community connection," according to its website. CSC spends time with each business to build the campaign. Approved campaigns then run for up to four weeks. Campaigns that fall short of their minimum funding goal do not get any of the money.

"We're looking for whether the capital is useful, responsible and connected," Maxwell says. "It's useful if it's for a purpose that will help strengthen the business. It's responsible if the loan is an amount the business will be able to pay back, and it's connected if the business has a community that will support it."

Typical businesses using CSC are food-related (coffee shops, restaurants, bars) and other neighborhood businesses (hair salons, gyms) that are built around strong communities, according to Maxwell.

"Businesses are blown away by the expression of love when their community buys into the loan, and when they pay them back, there's that reciprocity," Maxwell says. "They pay them back in dollars and in making the place that they live better."

While the loans do not technically carry interest, CSC charges a one-time $250 fee to launch a campaign and a $50 monthly membership fee until a loan is repaid. The company is a registered social purpose corporation in Washington State, a type of for-profit entity that also aims to create a positive social or environmental impact, according to the website SPCWA.

The funding through CSC helped Cocoa Cinnamon create more than a dozen jobs at the second location, which opened earlier this year.

"At the location of our second shop, the corner has been a little bit dead, but there's been good potential for our business to really flourish," Grodski de Barrera says. "We'll be part of bringing that corner to life. And people from that neighborhood got to participate in making that happen."

The article originally appeared on NerdWallet.