Inspired by one professor's infectious enthusiasm for Emily Dickinson, Obsessed is a new HuffPost Culture series exploring the idiosyncratic, all-consuming passions of public figures and unknowns alike. Through a mix of blogs and interviews, these pieces will highlight the elusiveness of whatever it is you just can't live without -- whether it's blue jays, Renaissance fairs or fan fiction -- or, as in the case of David Lynch, coffee. If you have an obsession to share, drop us a line at culture@huffingtonpost.com.

I am pretty much obsessed with coffee. I've been drinking coffee on a regular basis since I was in the ninth grade. In the ninth grade, I met my soon-to-be good friend, Toby, on the front yard lawn of my girlfriend's house. And during that first conversation with Toby, he happened to tell me that his father was a painter, a fine art painter. Hearing this news that an adult could be a painter -- an explosion went off in my head and from that moment on all I wanted to do was paint. And for me, the world of a painter held much coffee.

Coffee became tied to what I called "The Art Life." I loved to go to diners and drink coffee and try to catch ideas for the work. Coffee has always seemed to facilitate thinking and catching ideas. Not only that, but the flavor of coffee is beyond the beyond good.

Even bad coffee is better than no coffee at all.

For a long time, outside of diners, I drank a lot of instant coffee and I would drink it from styrofoam cups. For many years, I drank probably 20 cups of instant coffee per day. One of the things I discovered from drinking coffee in a styrofoam cup was a kind of fantastic visual trick. If you have a full styrofoam cup of coffee and you move the cup slowly on a certain type of surface, a vibration will come forth and ripples will appear on the surface of the coffee. And if you push the cup a little bit faster as it's vibrating, individual droplets will leap out of the ripples and dance all along the surface of the coffee. I always wanted to film this effect, but I never have. And nowadays, the environmentalists tell us that styrofoam cups aren't so good, so I haven't had an opportunity to see this trick filmed.

Coffee and coffee drinkers have appeared in a couple of my films, I guess most notably Twin Peaks and Mulholland Dr.

A couple of years ago, my friend Erik who worked with me asked me why I didn't get my own line of coffee. I thought it would be a good idea and I began to test many different types of coffee. I finally found a coffee that I loved more than all the rest. And during blind tests I would always pick that one coffee.

I contacted the company that made it and together we worked on slight variations for a house roast, a decaf, and an espresso blend. This became the David Lynch Signature Cup Coffee. And I really like it very much. My friend who came over today had a decaf cup and said it tasted very good. I now drink about seven large cups per day, and I really look forward to each new cup.

Maybe there's not an idea in every bean, but for me there are many good ideas hiding in coffee. 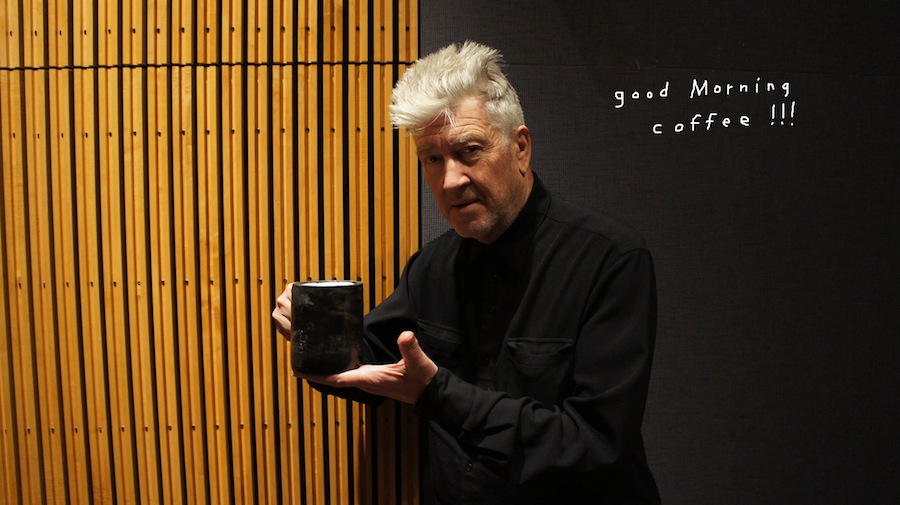