It's the age-old question that consistently plagues couples: when is the right time to move-in together?

A lot of unknowns come into play here, which makes the decision so much more difficult. Is it too soon? Will it save me money? Will it cost me money? Will it hurt our relationship? What if he/she discovers I'm actually a hoarder of Cat Fancy?

The folks at Rent.com wanted to get to the bottom of this and asked 1,000 cohabiting renters their thoughts on how long couples should date before making the big move.

According to the survey, 37 percent said six months to a year is an appropriate amount of time, 29 percent said more than one year, and 18 percent said to wait until after marriage. You can see all the results in the infographic below. 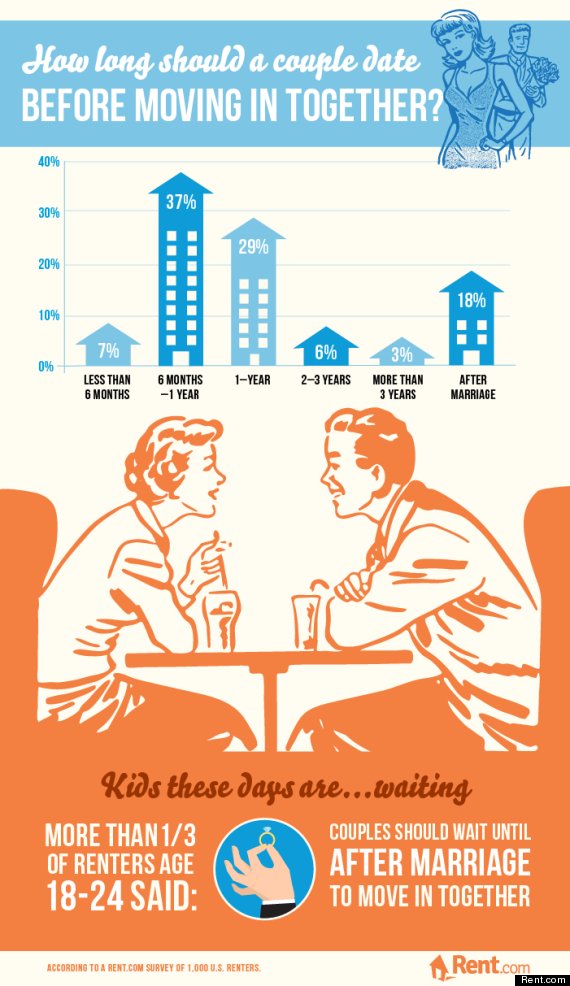 But what happened once these couples made the move? Was it all butterflies and rainbows?

Once couples shacked up, 63 percent said they rarely have a night with just their friends, and 58 percents said weekends are spent staying home with their S.O.

And though 27 percent of respondents said they moved in together within less than six months of dating, only seven percent of people surveyed recommended doing that.

However, on the bright side, almost half of those surveyed said the upside to moving in was spending more time with their loved one. And 32 percent said moving in together helped them realize they had found "the one."

10 Items To Toss When Moving In With Someone
Voting Made Easy
Register to vote and apply for an absentee ballot today
Register now
More:
Dating Advicegetting marriedweddingslove adviceDating
Newsletter Sign Up
A weekly guide to improving all of the relationships in your life
Subscribe to HuffPost’s relationships email
Successfully Subscribed!
Realness delivered to your inbox