They called it "the world's greatest radio station," and back then, when AM radio really meant something, it very well might have been. From the late 1950s throughout the '60s, KSFO dominated the San Francisco radio market with a heavyweight mix of personality, style and swagger like none other. No, it wasn't a rocker, it was an adult station, your parents' music -- that is if they were into Sinatra, Ella and Tony Bennett. It was also the flagship station of the Giants back in the glory days of Mays, McCovey, Marichal and Cepeda, and with baseball hall-of-fame voices like Russ Hodges and Lon Simmons 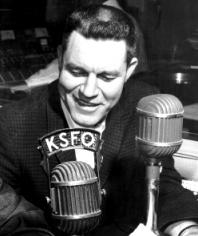 At the forefront was an all-star lineup of deejays -- proud to wear the moniker. If Sinatra was the icon, then they were the disciples, spreading the gospel of hip over an urban landscape that was already the summit of swank. They broadcast their shows live and local, and ever so compelling from plush studios in the Fairmont hotel on Nob Hill, with no less than Mel Torme singing the custom station jingles. 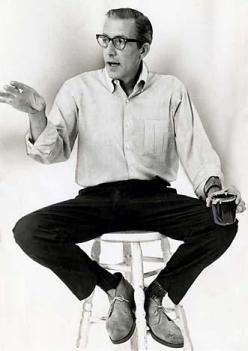 Cohorts in cool, and the high chieftains of hip, the KSFO personalities were headed by morning-man, Don Sherwood, who was so popular and such a water cooler conversation piece that it was reported KSFO paid him over six figures not to work at another station when he retired from KSFO in the early '70s. Typical of the hard-living Sherwood, he referred to New Year's Eve as a night for amateurs. 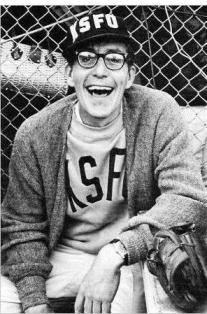 But Sherwood wasn't the only star at KSFO -- in the afternoons it was Jim Lange. Yeah, The Dating Game guy, who was also the announcer on the Tennessee Ernie Ford TV show while still doing his afternoon gig on KSFO. (Photo courtesy of the California Historical Radio Society and the Bay Area Radio Museum & Hall of Fame)

Perhaps even more notable (at least from a "beat" perspective) was Al Jazzbeaux Collins, one of the early hosts of The Tonight Show, who came to KSFO from New York. Collins broadcast his special brand of cool from deep within the imaginary purple grotto, where he "majuberized his listener/callers with the legendary, "We ain't got to show you no stinking badges."

Yes, we know he got the line from Bogart's Treasure of Sierra Madre, but Collins gave it a life for decades well beyond. Also in the mix was the ever smooth Jack Carney, who came by way of St. Louis and New York's WABC. Carney also fronted as the owner of a bar in town, The Tiddley, and was later inducted into the Radio Hall of Fame, most notably for his work in a return to St. Louis after his KSFO days. 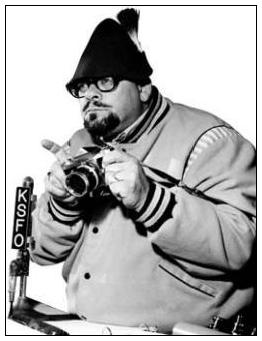 Replacing Carney, the KSFO team was joined by Dan Sorkin -- a star in Chicago, he was originally recruited to San Francisco to do battle against Sherwood at cross-town rival KFRC. When that didn't work, he jumped ship and joined the KSFO juggernaut as one of its more colorful cast members. (Photo courtesy of the California Historical Radio Society and the Bay Area Radio Museum & Hall of Fame)

And while zany stunts and promotions were part a natural part of the KSFO guys' repertoire, part of their personal playground was Marin Country Club. Like them, it was young, hip affluent, and just a half-hour out of the City, set in the posh elegance (and warmer climes) of nearby Marin County. It just seemed to fit better than the more established City tracks like Olympic and the august San Francisco Club. Jim Lange was a member at Marin, and played there regularly. Hugh Heller, who was the either the GM or Program Director of KSFO (we can't get a confirmed beat on which) in the early sixties had his home in the surrounding Marin Country Club estates. Like the KSFO deejays, other club members shared similar profiles, and reveled in the zaniness and glory of their nouveau lifestyles. The annual Carnavale event was a costumed golf tournament that each year strived to out do the last. In 1963, the Nave brothers (prominent Marin family) arrived on the tee in a helicopter, dressed in space suits. 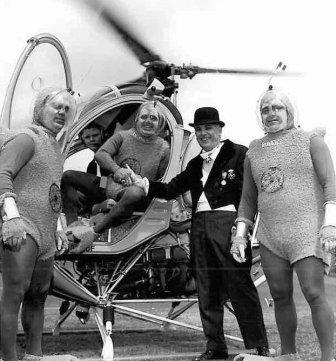 Subsequent years found participants escorted in a rickshaw, and one year, even an army tank. But over the years, things naturally evolved (KSFO as a music station is now long gone), and the golf course needed updating. Membership called in renovation specialist, noted golf architect, John Harbottle, who had done similar work at Los Angeles Country Club, Tamarisk, and an assortment of other prestigious clubs.

"We rebuilt all the greens, tees, fairways, bunkers and native areas to create a more historic character," says Harbottle. "Also, added some new tees, modestly relocated a couple of greens, and ran a few miles of drainage throughout the fairways on all 18 holes." 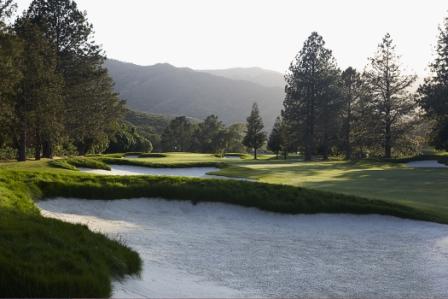 The results have added a classy touch and an invigorated spirit to the former deejay playground. And while the old KSFO may not exist any more, certainly a small part of its heritage does survive, and those who now play at Marin Country Club can treasure the memories and share in the legacy every time they tee it up.

Lyrics from one of the Mel Torme KSFO jingles:

On a misty morning; when the clouds are strung across the bay, the only place to stay, on a foggy day, is somewhere near a radio -- and the music they play on five-six-oh, will turn cloudy skies to blue -- just for you, just for you, on Kay-ESS-Eff- Ohh, San Francisco!