With less than two weeks to go before San Francisco voters weigh in on a ballot measure that would change the way Coit Tower is funded, Mayor Ed Lee and Board of Supervisors President David Chiu announced the creation of a $1.7 million fund dedicated to the restoration of one of San Francisco's most iconic landmarks.

"Protecting the future of Coit Tower is one of my top priorities," said Chiu, whose district encompasses the tower, in a statement released on Thursday. "Now, we can move forward on the improvements that this iconic piece of San Francisco’s skyline deserves."

This new fund will incorporate the $250,000 the city's Arts Commission had already budgeted toward the preservation of the 27 historic Depression-era murals that ring the inside of the monument's base. The rest of the $1.7 million will be drawn from excess money left over after a number of projects associated with the $9.5 million in revenue bonds issued by the city in 2004 came in under budget. The money will be spent on renovation of the murals as well as additional improvements to the structure such as a new roof and improved access for visitors with disabilities.

The murals, with their Diego Rivera esthetic and depiction of slice-of-life scenes of the California experience, were painted in the mid-1930s by artists like Bernard Zakheim and funded by the Public Works of Art Project, a predecessor to the Works Progress Administration.

The announcement of the restoration fund comes on the heels of a Recreation and Parks Department-commissioned report by the Architectural Resource Group that found both the murals and the structure itself to be gradually falling into disrepair and in need of a significant, across-the-board investment.

"The timing just worked," Parks chief Phil Ginsburg told the San Francisco Chronicle. "We had always intended to use this money for deferred maintenance and when the Coit Tower report came out, we decided to use it there."

Ginsburg said the department had always planned to address problems at the tower, although he acknowledged in an interview earlier this month that the Prop. B campaign sped things up a bit. Still, Ginsburg suggested that Thursday’s funding announcement had nothing to do with the voting period coming to an end soon.

"The report is deeply disturbing, but it's great news that the public outcry about the neglect of Coit Tower and the damage to the historic murals has finally forced the city to take the problems at Coit Tower seriously," Jon Golinger, chairman of the Protect Coit Tower Committee and the leading public voice pushing the Coit Tower ballot measure, told KTVU. "Now we need to pass Proposition B to ensure that Coit Tower gets permanent protections instead of just a one-time fix."

Gollinger, who has been rumored to be gunning for Chiu's seat on the Board of Supervisors, hopes that the non-binding Prop B will, for the first time in its history, provide Coit Tower with a dedicated funding source. While Coit Tower is one of the Parks Department's most profitable attractions, money for its upkeep has always been allocated on an as needed basis. As a result, some charge, the tower and its famous murals, have become the victims of neglect.

In a PBS Newshour segment on the controversy surrounding the murals, Zakheim's daughter, Ruth Gottstein, criticized the city for paying insufficient attention to murals' care. "If it were treated as a museum, if the walls were kept secure, if the entrance was guarded so that people could walk around it, as in any other museum of any importance in the world, it would be secure," said Gottstein. "And its not."

Prop B dictates that all revenue generated at the tower be primarily redirected back into the monument. It would also prohibit the department from renting out the tower for evening private events, something that Parks officials had hoped was way to raise funds during an era of shrinking city budgets.

A San Francisco Planning and Urban Research Association report noted that the Parks Department saw the amount of money it received from the city's General Fund drop by 25 percent in the past five years and, over the same time period, had its labor costs jump by more than one-third.

The funding issue is precisely why Parks Department officials oppose Prop B. Since Coit Tower is one of only a very small number of financially self-sufficient parks in the city, money brought in by the tower is then spread out through the rest of the system. Department officials have warned that if Prop B passes and its money is stopped from circulating throughout the entire department, there's the possibility that some parks in the city's lower-income neighborhoods could be forced to close.

Both the Chronicle and the Examiner have come out against Prop B, with the former calling it "pure, unadulterated NIMBYism"

Check out this slideshow of Coit Tower's murals: 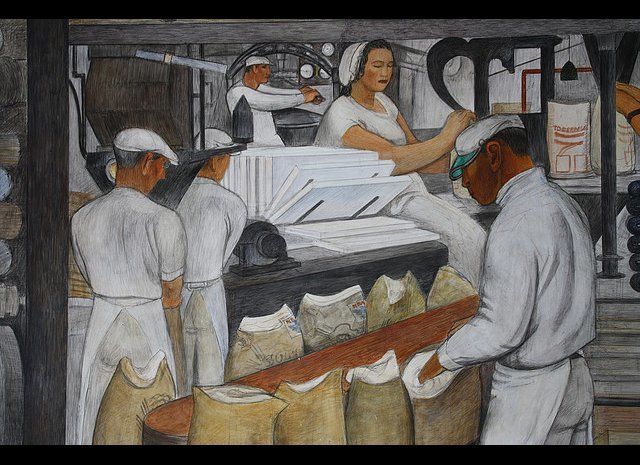