Around here, we like to say that Thanksgiving is like our Super Bowl. We've talked turkey and stuffing recipes, gravy and cranberry sauce, and on account of this year being a once-in-a-lifetime Thanksgivukkah combo deal, we've tackled brisket and latkes too. Each year we get to a point where we're not sure how much more Thanksgiving talk we can handle. But then, like clockwork, the holiday comes, we eat all the things and spend a full year getting nostalgic for doing it all over again.

Because we're never content to eat a Thanksgiving meal without one new addition to the table, I started asking around -- what dishes are mandatory on your Thanksgiving table? A dear friend John answered without hesitation, "Coca-Cola salad." I made him repeat himself. Coke salad? In what sense? He explained it was probably a Southern thing (he is from Louisiana), and that it combines cherry Jell-O with Coca-Cola and a few other things. He promised to get the recipe for me. 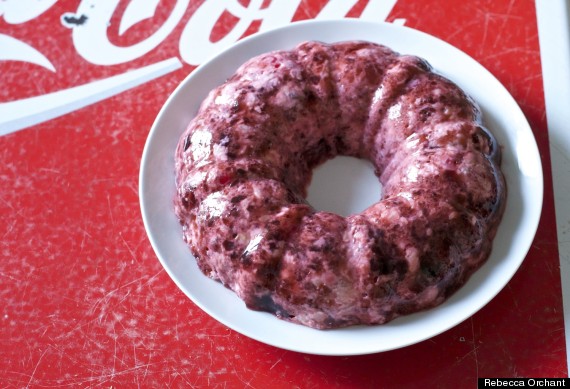 Now, keeping in mind how my last Jell-O mold experiment went, I was a little more than trepidatious. But Coke salad didn't seem to contain anything too scary, and a few people I mentioned it to even seemed to have eaten it with their families. Aside from being insanely sweet, and decidedly un-salad-like, Coke salad seems to fall in line with the American tradition of calling anything suspended in Jell-O "a salad." Thanksgiving is probably the one day of the year I feel pretty willing to let that slide.

Once I knew about this, I knew there must be other, even weirder things being eaten in homes across America on Thanksgiving. A few people bravely shared their weirdest Thanksgiving traditions with me, let us know what yours are in the comments!

1
Raw Stuffing
Rob Melnychuk via Getty Images
"This is so weird but my sister and I always picked at the raw stuffing before it went in the bird... we ended up eating so much of it that my mom started making a separate dish of raw stuffing for us every Thanksgiving, and now it's become a full blown tradition and on the list of things to make. My sister and I wake up on Thanksgiving morning and eat raw stuffing at the kitchen table for breakfast." -- Caroline Weller, Senior News and Video Editor, HuffPost Live
2
Sauerkraut
3
Lobsters
Tetra Images -- Jamie Grill via Getty Images
"My mom hates turkey, but knows everyone else requires it. To appease herself, as she's cooking during the day, she steams a few lobsters 'for lunch,' so she gets to eat something she likes on Thanksgiving." -- Rebecca Orchant, Associate Editor, HuffPost Taste
4
Cracker Barrel
colleengreene/Flickr
"Does going to Cracker Barrel count?" -- Cari Wade Gervin, via Facebook
5
Peking Duck
BJI/Blue Jean Images via Getty Images
"Is this weird? Our tradition is to have BBQ Peking Duck with scallion pancakes and a hoisin-based sauce." -- Elizabeth Dickey, via Facebook
6
Olives & Celery
Muffet/Flickr
"We do two small platters of olives and celery -- one on each end of the table -- to act as a palate cleanser." -- Mary McCartney, via Facebook
7
Pickle Pinwheels
Chronicles of a Stomach Grumble
"My husband's family (now mine) has pickle pinwheels. A slice of thin ham spread with cream cheese, a whole half sour in the middle and then rolled up and sliced. We may have even brought them to your house for Thanksgiving that year." -- Kaci Ruh, via Facebook

[Ed Note: They did, and I've never forgotten them.]
Advertisement