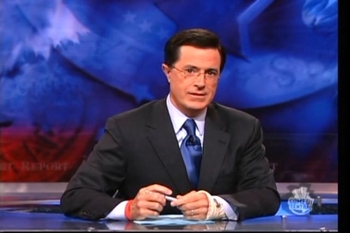 Stephen Colbert, write-in candidate? Looking that way: Colbert's bid to get on the South Carolina Democratic primary ballot was rejected today by the SC Dem executive committee by a vote of 13-3, according to MTV News.* Ouch.

The Doritos-sponsored campaign, which was announced last month, seemed to be on the road to legitimacy this week when Colbert's campaign paid the $2,500 filing fee necessary to get into the race just before the noon deadline on Thursday, according to The Associated Press.

Less than two hours later, though, the executive committee of the state's party crushed Colbert's bid when it voted not to certify the candidacy, according to Keiana Page, a communications assistant in the state Democratic Committee's office. Using criteria such as whether the candidate was recognized in the national news media as a legitimate candidate and whether they'd actively campaigned in the state, the committee put the kibosh on the Colbert bid.

According to the Politico's Kenneth P. Vogel, Colbert paid the filing fee with a personal check. Vogel also looks ahead to Colbert's options:

Colbert could still run as an independent in the general election, though he'd have to collect 10,000 signatures to get on the ballot, said Chris Whitmire, a spokesman for the State Election Commission.

10,000 signatures is probably doable — if Colbert had passed around a petition at his recent appearance at the University of South Carolina in Columbia he'd probably be well on his way (especially given his campagin promise to "crush the state of Georgia" if elected). And recent polling data shows that Colbert is doing well — a recent Rasmussen poll put him at 12% against Hillary Clinton and Rudy Giuliani (never mind that he's kicking butt on Facebook). Still, there's no question that cutting a $2,500 check is easier. Is this the end of the Colbert Dream? Probably not — no doubt he'll find a way to get around the vote, and hilariously (maybe it's worth $35,000 to switch to the Republican ballot). Either way, don't count him out yet. Democracy wouldn't have it any other way.

Related:
Are We Colbert's Punch Line? [LAT]
Stephen Colbert, I Love You, But It's Enough [ETP]