Stephen Colbert is a great entertainer, but the reason he has resonated so strongly with audiences particularly during this administration is because he has a core of earnestness that deeply reflects a strong moral sense and a desire to educate, illuminate, and do good works. If you think I'm being overblown, all you need to do is watch last night's episode of The Colbert Report, which was uniquely inspiring, edifying and touching — all while still managing to be completely hilarious.

It was an amazing television moment. After paying his respects to Monday's debate and busting out a pretty darn good Tom Cruise imitation, Colbert made a segue which, in retrospect, was brilliant: Moving from Clinton and Obama's bickering over who loved Reagan more to the evidence provided by Tom Brokaw's book, Boom! Voices of the Sixties, which, in addition to quoting Hillary Clinton discussing how Ronald Reagan finessed the balance of his role "beautifully" on page 404, contains an early segment devoted to the Reverend Andrew Young, the "last surviving member of Martin Luther King's inner circle at the Southern Christian Leadership Council," and lifelong, steadfast civil rights activist. Colbert got to that — eventually — after first introducing a documentary-style segment (in the style of Brokaw's "1968" documentary, complete with soundtrack) about the Charleston Hospital workers union strike of 1969, which was settled by the young, er, Young, who negotiated with a vice president of the associated Medical University of South Carolina — "the only administrator willing to meet with Young was the newly-appointed vice-president of the medical college, who had taken up the position just days before the strike was called." The two worked behind the scenes to finally end the strike — and on the hundredth day, they came to an agreement, awarding raises to the striking workers.

Colbert doesn't say so in the episode, but his personal history is a matter of public record, and the story of his father is a sad one: In 1974, when Colbert was ten years old, his father and two of his brothers were killed in a plane crash. As if this wasn't moving enough, Colbert then brings out (or, runs triumphantly over to, as is his wont) Andrew Young himself, his guest on the program. It is pretty poignant even if you don't know the full story, hearing Young explain to Stephen how he worked with his father. More than that, Young tells Stephen — pretty seriously, it seems — that he is his "destiny" and that Stephen has the power to end the writer's strike. In a clip that the WGA should blast to every studio, network and media organization across the country (which we have below, of

course), Young said the current striking writers weren't a whole lot different than the striking hospital workers in 1969, fighting to be paid the same wages as their white counterparts — in both cases, said Young, it was about a small amount, fair money for fair work, but more than that it was about respect. He called on Stephen to start the behind-the-scenes work to start settling the strike...just like his father. Even though Colbert is as jovial and joke-cracking as ever during this, it is hard not to respond to all of this — the historical and personal context, the moment of the meeting between Young and Colbert, the fact that Stephen was actually getting a mission from this giant of the civil rights movement and American history. Who turns down Obi Won Kenobe? Probably not Colbert, who has always had a thing for fantasy. Liken Young to Gandalf and it's pretty much a done deal.

You'd think that would be enough for one episode, right? Well, it wouldn't be Colbert if there wasn't a rousing musical finish (think: Guitarmageddon, writing the songs that make the whole world sing with Barry Manilow). This was accomplished with a rousing rendition of...well, watch it 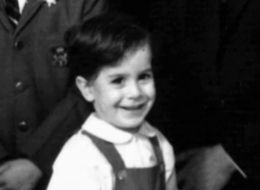 yourself. But it's amazing: Stephen, Andrew Young, Malcolm Gladwell, the Harlem Gospel Choir ...and Colbert's writers, who presumably had nothing to do with the creation of that episode. Which people like Jeff Zucker are probably pointing to as evidence that we don't really need writers, which of course makes perfect sense: All they need to do is find TV hosts with the wit and talent and heart of Colbert who happened to have had fathers who negotiated the end to a history-making strike with a giant of the civil rights movement. I know. Hollywood boulevard is crammed with 'em.

Sorry, Malcolm Gladwell, for mentioning you so late — I totally agree with you about that potato-knife thing. Nice haircut!

Watch all three segments below. If you can only watch one, watch the middle one — Andrew Young, who is amazing. The whole thing is amazing, actually.