You know the germiest places in every room and could write a tutorial on hand washing, but you'll still be surprised by the sneaky ways colds affect us.

You're more likely to pick up germs from a keypad than a used tissue.

If your sniffly friend wants to show you photos of her toddler on her phone, offer to hold her purse while she does the scrolling. Droplets of moisture containing cold-causing viruses get dispersed (and thus, neutralized) on tissues, fabrics and other soft materials but remain intact on metal, glass and the scratch-resistant polycarbonate of an iPhone. Cold viruses can live on these types of objects for up to 18 hours, says Jennifer Collins, MD, who has a private practice specializing in allergy, asthma and immunology and is affiliated with Beth Israel Medical Center in New York. In one 2007 study, when healthy people touched hard, smooth things like light switches, doorknobs and telephones that had been contaminated with viruses, 60 percent picked up the germs after one hour, and around 30 percent became infected at 18 hours. (Flu viruses tend to be heartier: Not only can they live from one to two days on hard, nonporous surfaces, but they can also stick around for 8 to 12 hours on soft, porous ones.)

Your sneakers are your best defense.

There's no vaccine for the common cold—no shot you can get, no pill you can pop, no medication that can grant you immunity from the miserable combination of a runny nose, scratchy throat and stuffy head. In numerous surveys, though, fitness buffs report that they're much less likely to experience these symptoms—and not because they also tend to be more likely to eat well and prioritize sleep. In 2010, exercise researchers at Appalachian State University followed more than 1,000 adults during the fall and winter, monitoring their activity level and rates of upper-respiratory-tract infection, and found that those who exercised five or more days a week were indeed less likely to catch a cold (or report severe or long-lasting symptoms) than those who worked out once a week or less. Study author David C. Nieman, PhD, hypothesized that regular exercise—which includes brisk walking—mobilizes immune cells, putting them on high-alert for invading pathogens.

While winter colds are usually gone after a few days, their summer cousins can stick around for weeks. This is partially due to the fact that they're caused by different germs. Rhinoviruses and some other cold-causing viruses survive best in cooler weather, while the enterovirus seems to thrive from June to October. Some experts believe that another reason summer colds persist is that we're more likely to do things in warm weather (blast the air-conditioning, which can dry out the protective lining of your nostrils, try to "sweat out" the cold by over-exercising, refuse to go to bed early) that make it harder for our immune system to fight them off.

Forget about most of those folk remedies—except this one.

Orange juice, echinacea, hot toddies...there are no reliable studies that prove they actually fight colds or help you recover from them (alcohol can even make you feel worse by messing with the sleep you so badly need). Research does support the healing properties of one old-fashioned cure, though: honey. A study published in 2012 in the journal Pediatrics shows that honey can help relieve nighttime cough symptoms in children over 1 year old, and another in 2008 found that buckwheat honey helped sick children sleep better. "It's like putting a soothing moisturizer on the dry, irritated lining of your throat," Collins says. While the American Academy of Pediatrics strongly recommends against giving honey to infants under 12 months of age (it can contain a bacterium that causes infant botulism), this treatment can bring sweet relief to pre-schoolers, kids and adults, too.

Your symptoms are a blessing (to other people, at least).

With colds, you're most likely to infect other people two to four days after you first feel symptoms, Collins says. So the violent sneezing, coughing, honking into tissues—they're your body's way of announcing to healthy folk that you're contagious and they'd be wise to keep their distance. (The flu, on the other hand, can be passed along one day before any symptoms appear, as well as up to five to seven days after a person feels sick, so you could be contagious and not know it.) When someone shoots you a dirty look for coughing too loudly, remind yourself that you're doing them a favor.

You can drink milk.

You've been told that drinking milk doesn't cause a sick person to make more mucous and that the phlegmy feeling you may notice is the liquid temporarily coating your irritated throat. Still, you figure there's no harm in easing up on the dairy until your nose has stopped running—or until cold season is over. This strategy really won't help, says Collins, and it could backfire. She explains that the vitamin D in milk can also boost your energy while your body is fighting off pathogens, and the liquid will keep your tissues hydrated. What's more, vitamin D spurs cell growth and helps keep your immune system working optimally—potentially preventing you from getting sick in the first place. Those who are still firmly anti-milk (for whatever reason) can get their vitamin D from fish like swordfish, salmon and tuna, or from fortified orange juice or cereal.

You can't get sick from the same cold twice.

Remember that annoying cold you just couldn't kick last year? The one that kept coming back like a string of Nightmare on Elm Street sequels? Well, it was actually a series of different colds. After you're infected with a cold virus, you usually become immune to it, so it's unlikely it will reinfect you. Unfortunately, you're still vulnerable to the 200-plus other viruses floating around during any given year, Collins says, and they can combine to create more than 1,500 different variations of colds. She explains that the first virus strikes a blow to your immunity (often compromising your vulnerable nasal passages) that makes you more susceptible to other viruses. You then touch something (or someone) germy and bring your hand to your face, or you get coughed or sneezed on, and you pick up a brand-new cold that's unrelated to the first. So keep up the hand washing, even if you’re already sick.

OWN Healthy Mind & Body Own Getting Sick Winter Health Flu 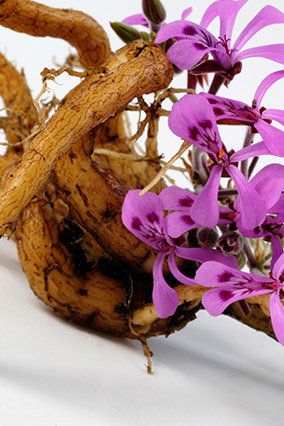 1 / 3
Umckaloabo Root Extract
Used by Germans as a cure for respiratory woes. One study found that people with sinus infections who were treated with an herbal drug made from the plant's roots saw their symptoms nearly disappear in just three weeks.
Getty Images