Whether you're an evil mastermind, doomsday believer, or Batman himself, this just might be the house for you. Welcome to your new nuclear-and biochemical warfare-proof lodge complete with underground cold-war era missile silo.

Located in Upstate New York, the 185-acre property's backstory reads like a concept for a graphic novel. According to Wikipedia, in the 1950s the U.S. government built hundreds of Atlas-F defensive missile silos in the event thermonuclear war were to erupt. These specific missiles were stored vertically underground and were rigged to rise out and then lift off via a control center built adjacently. Since nuclear war thankfully never came, these missile bases were all but abandoned.

Enter Gregory Gibbons and Bruce Francisco. In 1991, the two cousins and business partners flew out to Saranac, N.Y., to check out the silo after Gibbons heard it was up for sale.

"When I first went to look at the space, it was just a stairwell coming out of the ground," Francisco told the N.Y. Daily News. "I saw that the missile base here was in raw condition, and I thought we should do something amazing with it. I wanted to build a surface home as a covert entrance."

Actually renovating the structure proved grueling. The biggest challenge was making the circular two-level launch control room inhabitable - the place had been swamped in water for over 30 years. In a video for CNN , Francisco described some of the conditions they faced.

"My cousin worked for three years with college kids to manually clean this place. It used to have drywall and after a while everything just became sludge and muck."

The end result, however, is incredible. For one, you can fly directly up to the property as a runway runs alongside the surface home. A serene, lodge-like structure with an open interior elegantly masks the entrance to the silo. It's packed with state-of-the-art appliances and sleek interior design, with light pouring in from the windows that line the walls. A keypad protected door on one side of the lodge grants access to the renovated launch control room below.

The two lower-levels feature the same high-end design including windows that stream simulated daylight. On the bottom-most level, at 40-feet underground, a 2,000-pound "impenetrable" door leads to a 50-foot tunnel. This leads to the 185-foot-deep cylindrical missile storage room which remains in its original condition, the steel structure that held the missile (not included) still in-tact.

"It’s 12,000 square feet that could be underground condos if people are worried about the end of the world," Francisco says in the video.

The asking price is predictably steep at $1.76 million dollars for the Adirondack State Park land (and everything on it). According to the property's website, the silo originally cost around $18 million to build in 1958, which equates to over $141 million today.

If you don't have the funds handy for the whole package, never fear - they've broken the acreage down into individual property. For example, the home with access to the missile silo is available for $750,000.

Overall, it took Gibbons and Francisco 20 years to finish the project as the listing just went live earlier this year. But was it worth it? Decide for yourself and take a slideshow tour below. 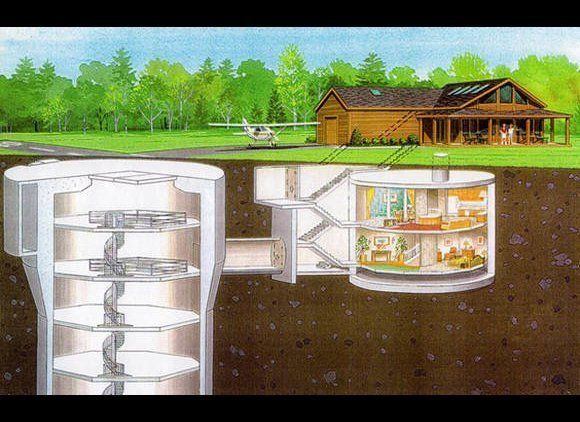