It doesn't get much cooler than this.

Physicists at MIT have created what may be world's coldest chemically stable molecules, chilling sodium potassium gas to half of one millionth of a degree above absolute zero (defined as minus 273 degrees Celsius or minus 460 degrees Fahrenheit, or 0 on the Kelvin scale used by many scientists).

"Now we’re at 500 nanokelvins, which is already fantastic, we love it," Dr. Martin Zwierlein, one of the physicists, said in a written statement. "A factor of 10 colder or so, and the music starts playing.”

Only chemically unstable molecules -- which decay quickly -- had been cooled to such a low temperature before, according to Zwierlein. His team's feat breaks the previous record for coldest chemically stable molecules, which was set last year by a team of British, French and Austrian scientists, by a factor of at least 10.

Scientists create such "supercold" molecules in order to observe exotic forms of matter and quantum processes, according to Live Science.

Among the exotic forms of matter the researchers hope to see are so-called "superfluid crystals." As Zwierlein explained in the statement, these crystalline forms "feel no friction, which is totally bizarre. This has not been observed so far, but predicted. We might not be far from seeing these effects, so we’re all excited.”

And ultracold molecules may also be used in quantum computing.

“The molecules could be used as quantum bits, where ‘0’ and ‘1’ is robustly encoded in the rotation of the molecules,” Zwierlein told The Huffington Post in an email. “Quantum computation itself would be extremely important for cryptography and to solve certain types of problems that simply take impossibly long on a ‘classical’ computer.” 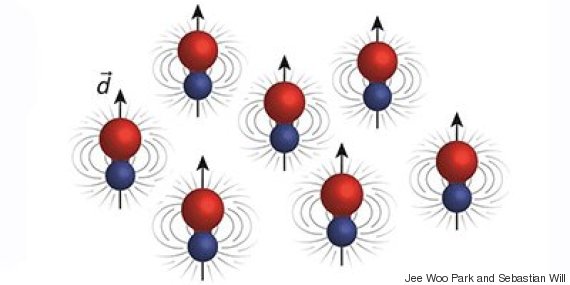 The molecules had the strongest “dipole moments” (arrows) -- imbalances in the distribution of charge across the molecules, which lead to magnet-like interactions -- ever observed in ultracold molecules.

For the research, Zwierlein and his colleagues used one set of lasers to cool sodium and potassium atoms separately, and trap them. Then they applied a magnetic field to get the atoms to form a weak bond.

“It’s like tuning your radio to be in resonance with some station,” Zwierlein said in the statement. “These atoms start to vibrate happily together, and form a bound molecule.”

To strengthen that bond, the researchers used a technique involving another set of lasers -- a high-energy and a low-energy beam -- to "suck away" heat from the molecules and bring them to their lowest vibrational and rotational states.

They observed that the molecules were stable for around 2.5 seconds, which is considered a relatively long lifetime. And they were far less reactive than molecules at room temperature, tending not to collide with other molecules around them.

Next, the team hopes to cool molecules to an even lower temperature, study the interactions between them, and learn more about the limits on their lifetime.

A paper describing the research was published on May 18, 2015 in the journal Physical Review Letters.