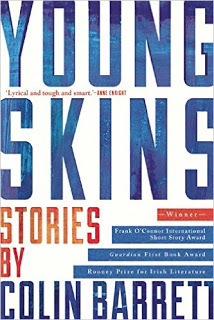 The brilliance of Colin Barrett's short story about a dyspeptic poet (who refers to his neighborhood as "a budget version of the afterlife," is described as looking at 29 like a "grotesquely ancient teenager" who makes his living from "cartoon porn" and has clients with e mail addresses like Pussysplitter112), "Anhedonia, Here I Come," (The New Yorker, 4/18/16) lies in the words. It may seem almost tautological to iterate that writing is brilliant because of language, but Barrett calls attention to his main character, Bobby Tallis' words almost immediately, since they are not the kind that are likely to roll off your tongue. They're eccentric characters in and of themselves. "Dysphagic," referring to "difficulty swallowing" is the first we meet. "Spumous, "ejecting a froth," follows and then in order there are "sebum," pertaining to an "oily secretion of the sebaceous glands," "macrocephalic, "large head, "heteronormative," the idea that people can be lumped into gender categories and "coprophagia" referring to species who dine on feces. And here are some lusty turns of phrase, "pullulating narcissim," "palsied silence," "originary trauma," "incinerated introversion" with the coup de grace being "a harnessed baby's loose limbs waggled and its head bobbed disinterestedly around" like "a trussed crab unaware that it is about to be boiled alive." By the way "anhedonia," the inability to experience pleasure, is a word first introduced in popular usage by Woody Allen whose Annie Hall originally used it as its title. Now it's the title of Bobby's collection, a work which has been in progress for 8 years.The author remarks of his characters creation,

"In terms of theme, he could not get beyond what he was convinced was a fundamentally spurious obsession with suicidal ideation, but simultaneously he felt that every other poetic topic or concern was an obfuscation, an eschewal, or a bald retreat from this theme. He'd been smitten with the concept of suicidal ideation since he was a teen-ager, but the problem, he figured, was that he had never truly wished to kill himself."

One of the hysterically funny moments in the story occurs when another would be writer, a gay father who has his baby in his car and who is out on a mission to score drugs, attempts to get Bobby to read his work, after having tried to go down on him. "It's the language...I just want to know if it's doing something interesting or not." The framing device is a commentary on the mixture of bottom feeding and prostitution we associate with the literary agora. The Maecenas of Bobby's world is Fiachra Calhoun who runs a venue called the Andromeda. Calhoun, a sometime publisher, is bringing out a book by a college student whose name, Jess Tombes, itself constitutes a form of poetic justice. Bobby is stung with jealousy but thinks,

"It wasn't even a question of whether or not she was objectively better than him, it's that Fiachra had thought so, and soon others would too."

How many short story writers have experienced these exact same thoughts about Lydia Davis? The New Yorker fiction department has outdone itself in publishing this masterpiece of vitriol. But it's ironic since after years of avoiding subjects like this they had only three weeks before published an equally vicious satire by Ian McEwan based on one writer "appropriating" another's works ("My Purple Scented Novel," The New Yorker, 3/28/16).