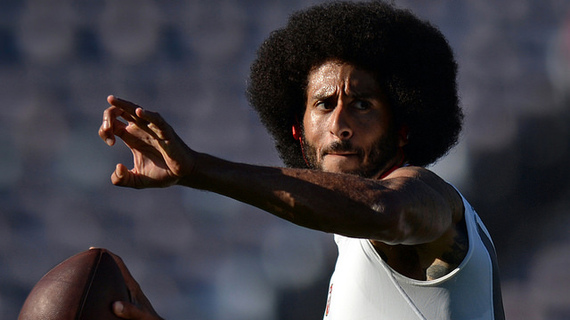 The great Jewish rabbi and theologian Abraham Joshua Heschel said of his time marching with civil rights warriors and prophets in Selma that "I learned to pray with my feet."

Colin Kaepernick is praying in a similar vein by taking a knee.

Why do we feel what we do when we are confronted by Kaepernick's mood and method of protest? I'll admit at first my thoughts were rather shallow about it. I didn't think his method would be constructive or effective in building and crossing the necessary bridges of communication, which reflects my own discomfort at confrontation and the necessity of confrontation. I also thought he would be more effective if he wasn't the semi-washed up backup quarterback of a really bad San Francisco 49ers team.

In the time since my first reactions, I am forcing myself to confront the privilege of my aloofness by instead attempting to hear, see, and answer to the deeper call of what he, and increasingly more and more athletes, professional and otherwise, are trying to say to the American people.

The knee Kaepernick takes is a profound prayer for the people of this country, especially those with the power and privilege to be out of the way of the firing line of a misguided, racially charged bullet from a police gun, to open up their hearts and minds in ways which seem fearful but which actually lead to compassion, resurrection and redemption.

If you are not black, if you are not a Native American, if you are not a person of color, then it is very hard to understand the basic fact that the goal of racism is genocide. Racism invariably leads to the genocide of bodies, of communities, of culture, of dignity. Racism is the insidious, subtle and also overt, short and long-term commitment to the erasing of blackness, of color, from the American fabric. Genocide is not just the mechanical monster of the Nazis. It is simply the desire, the commitment, to the wholesale erasure of the "other." The definitions of genocide have their nuances, but they have a common core: the physical, mental, and spiritual erasure of a particular community of people/living beings.

To be racist is to express a commitment to and for the genocide of the people you are prejudiced against. The American person is both defined by their ability and inability to confront this truth.

To receptive, questioning folks, who want to confront this truth in their community and within their own selves I offer a list of books that are helping me to do my own work, the work of confronting and overcoming my whiteness. These books include American Holocaust by David Stannard, The Autobiography of Malcolm X, The Fire Next Time by James Baldwin, Seeds of Destruction by Thomas Merton, The New Jim Crow by Michelle Alexander, and The Shock Doctrine by Naomi Klein.

If one reads these works with the slightest opening in the mind and heart, as an American wrestling with the truths of the history of this country, one will feel wrecked and shattered, although no one near as much as the people of many colors wrecked and shattered by the events portrayed and revealed in these books.

But that feeling of wretchedness, of horror, of shame, of bewilderment, in relation to this monster of oppression, and the way this presence exists within those of us who benefit from our whiteness, is the way in and through to the call and the realization of the real promise of our humanity.

It is not so much a question of achieving and redeeming the American dream, as admirable and absolutely necessary as that may be if it involves living in a country where black men and women and people of color don't have to fear the genocidal murderous hand of whiteness striking them down on an everyday basis. This is the question of what it means to be a human being living in inexorable bond with other human beings. It's that simple and that complicated. It is the question of how we keep our call to that bond against the tidal waves of destruction which constantly threaten to pull us apart.

When Kaepernick takes a knee, you can hear the echo of God's wondering call to Cain after Cain has murdered his brother Abel. Cain responds by asking, specifically in his context and rhetorically through all time, "am I my brother's keeper?" This is a hard question, an accusing question, a question of confrontation. When we are not actually our brother or sister's keeper, then there is nothing we can do to completely cover our shame at this realization.

There are numerous reactions I have seen from family, friends, and strangers to the protest movement among athletes that Kaepernick started. A lot of these reactions express indignation at his disrespect to the flag and to the military, although this disrespect is not the intention of anyone participating in this protest.

Whatever the flavor of distaste against what Kaepernick has done and started, this distaste rarely, if ever, acknowledges the real, deep point of his protest: the call for Americans to increasingly open their eyes to the ghoul of genocide which continues to haunt this very country's existence. To open one's eyes in this way is difficult, painful, shameful, yet these feelings are the way in and through. Even more so, Kaepernick's protest is also part and parcel of the call of the Divine Presence for every human being to give primary concern, with active and audacious compassion, to the oppressed and marginalized in this world

In the Black liberation theology of James Cone, now in his 48th year of teaching Christian theology at Union Theological Seminary, we find that to be a devotee of God, Christian and otherwise, is to fight everyday for the dignity and humanity of those denied these essential attributes of being in the name of systems, structures and practices of oppression.

In his vital work God of the Oppressed Cone writes:

Christians join the cause of the oppressed in the fight for justice not because of some philosophical principle of 'the Good' or because of a religious feeling of sympathy for people in prison. Sympathy does not change the structures of injustice. The authentic identity of Christians with the poor is found in the claim which the Jesus-encounter lays upon their own life-style, a claim that connects the word 'Christian' with the liberation of the poor.

Sympathy does not change the structures of injustice. This is echoed by fellow Christian theologian Marcus J. Borg who writes, in his book The Heart of Christianity, that "charity means helping the victims. Justice asks, ' Why are there so many victims?' and then seeks to change the causes of victimization, that is, the way the system is structured." We are called not to simply address the problems with sympathetic handouts, clutching of pearls, or half-sent prayers, but to share in the monumental task of breaking the chains of racism, sexism, homophobia, Islamophobia, etc which still hold too many in bondage.

Cone adds, from his book Black Theology and Black Power, that "therefore it is understandable that freedom and justice are probably the most often repeated words when the black person is asked, 'What do you want?" The answer is simple, freedom and justice-no more and no less."

In the theology and culture of the Gaudiya Vaishnava branch of the Hindu/South Indian religious/cultural tree, there is the call to be para-duhkha-dukhi. The modern Vaishnava sage Bhakti Tirtha Swami explains this:

People normally feel some happiness, even if others are suffering, as long as they are not personally experiencing any difficulties. How wonderful it would be if we could think of ourselves as fortunate when we are chosen to experience challenges to our growth, which can relieve another from having to undergo the same difficulties. This, of course, is the mood of a high-class devotee who is para-duhkha-dukhi. A devotee feels the miseries of others and enjoys their happiness with them.

We need to ask ourselves: what will it take for us to feel the happiness and suffering of our neighbor, of our fellow human, as our own happiness and suffering? To be able to enter into this consciousness, to be able to even attempt, honestly, sincerely, and courageously, to enter into this consciousness, surely, one could say, is representative of everything great and ideal about being an American. But beyond even this uncertain and temporary designation, it is what means to be a human being devoted to your fellow human being and devoted to the ongoing, indwelling, freedom-seeking and justice-demanding presence of the Divine.

When asked about the "dream result" of his protest, Kaepernick responds simply:

The dream result would be equality. Justice for everybody. This is really something about human rights. It's about people. This isn't about anything other than that. Some people aren't given the same rights, aren't given the same opportunities as others. And that's really what the issue is.

It may be your opinion, freely yours to give, to claim that Kaepernick and his fellow athletes are being disrespectful to the ideal of America. But this movement of protest is not going to go away, especially with the most socially committed of American athletes, the NBA players, set to begin their season in a couple of weeks.

You may not agree with the method of protest, but can you be silent against what is being protested against, the ongoing slow-burning yet always violently-erupting genocide of cultures and communities of color? Is it, as Paul Tillich, asks "a sign of patriotism or of confidence in one's own people, its institutions and its way of life, to be silent when the foundations are shaking?"