The "Dog Days of Summer" are with us again.

Traditionally this term referred to a sweltering period in ancient Europe marked by a particular "rising and setting" of the star Sirius, the dog star, which in turn is part of the constellation Canis Major, Latin for "Greater Dog."

Today, the term generally refers to the hot, sultry period between early July and early September or, according to Nat King Cole, "those lazy, hazy, crazy days of summer" when Americans "lock the house up" and by the millions head for the lakes, rivers beaches or just to the closest swimming pool.

While the days of summer -- "those days of soda, pretzels and beer" -- are some of the most enjoyable and memorable ones, especially for young children, they can also bring sudden, unfathomable tragedy.

In a writing a year ago, I recalled how at the young age of six or seven, I witnessed the ocean drowning of my favorite aunt.

Tragic enough. But how about when a young child drowns?

The Centers for Disease Control and Prevention (CDC) reports that one in five of the average of 3,536 annual fatal unintentional drownings in the United States, are children 14 and younger. This means that on average every year approximately 700 children drown.

One of those children was little Colin Holst who, on one of those beautiful, lazy, hazy days of summer -- back in June 2008 -- went with his mother to an Austin, Texas, swimming pool.

To be precise, on June 13, 2008, Colin Holst, a proud and happy 4 1/2-year-old little boy went to the "big pool" -- just one day after graduating from swimming lessons and receiving his medal.

Colin was having a ball playing in the fountains and sprinklers with his friends, all moving around the pool together in a clump, playing and splashing and ducking in and out of the water.

Suddenly, in an instant, Colin wasn't with them. Time stood still as all eyes swept the pool looking for him, and then, only moments later, Colin was pulled from the shallow water unconscious and not breathing. Efforts to revive him at the pool were unsuccessful. Colin, the baby boy born "with a mop of dark hair that looked just like his mother's," died at the hospital the next day, having never opened his eyes again after his swim.

But as is sometimes the case, out of such tragedies something good, something noble is born.

Grief-stricken by their loss and shocked to learn the cruel toll drowning takes on children of Colin's age, Colin's family founded an organization dedicated to preventing such tragedies from befalling other families by educating children, parents, lifeguards and the community on drowning prevention.

Focusing its efforts on Central Texas, its major programs and initiatives include:

This year, Texas has already lost 61 children to drowning.

With the Dog Days of Summer in full swing, this commendable organization is redoubling its efforts to prevent and reduce such tragedies.

As part of such efforts, Colin's Hope is raffling a framed Team USA Olympic flag that has been signed by all U.S. swimmers and coaches who participated in the 2012 Summer Games in London, including Brendan Hansen, Michael Phelps, Kathleen Hersey, Missy Franklin and Ryan Lochte. (See photo below) 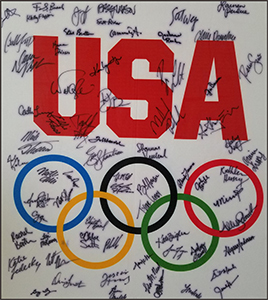 For additional details, please click here and to learn more about and contribute to this wonderful organization click here.

Please watch and share with your family and friends the 10-minute film below so that "Together, we can achieve a world where no child drowns."