This summer as a Templeton-Cambridge Fellow in Journalism I was engaged in multidisciplinary seminars focusing on science and religion moderated by speakers from all over the world, of every religious persuasion. One of the most memorable speakers this year was Noah Efron, of Bar Ilan University in Tel Aviv who came to speak to us about Science and Judaism. Learning from him was a luxury and sadly one which is increasingly challenged: more and more institutions would like to bar academics like Noah from pursuits like this fellowship because of his Israeli nationality and affiliation. Noah himself wrote about the issues of cultural boycott eloquently in Ha'aretz recently. 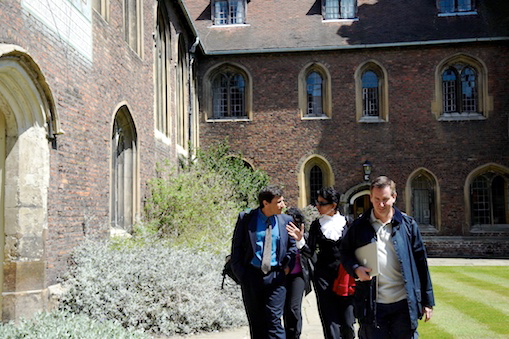 In conversation with Noah Efron at Queens College, Cambridge England earlier this summer during the 2010 Templeton-Cambridge Fellowship in Journalism

In an increasingly polarized world, anti-Israeli boycott as a means to influence political climate is urged more and more often. The cultural boycott of Ariel seeks to penalize spaces which should remain sacrosanct, and devoid of political positioning. Prime Minister Netanyahu recognizes these risks well:

"The State of Israel is under an attack of delegitimization by elements in the international community. This attack includes attempts to enact economic, academic and cultural boycotts. The last thing we need at this time is to be under such an attack - I mean this attempt at a boycott - from within."

Cultural and academic boycotts carry their own special devastation taking causalities on all sides of ideological divides. As a Muslim physician enriched by American Jewish and Israeli colleagues I feel especially strongly that channels of collaboration and engagement must always remain open. Such dialogue is especially important at times of heightened tension.

Yet I only became aware of mounting calls to boycott Israel within my field recently. A fellow Muslim colleague wanted to know my thoughts on a very strongly worded call (published in The Lancet) for the medical academe to cease all interactions with Israeli investigators and Israeli projects.

The authors, British academics, had published the medical sequaelae of events in Gaza in the aftermath of Operation Cast Lead. In conclusion, my British peers called for trade and academic boycott against Israel. This astonishing statement was met without chagrin. My own letter of objection also went unpublished, not only in The Lancet but also in two of the premiere US medical journals where I subsequently re-lodged my protest. Perhaps my objections were deemed worthless. Perhaps the journals did not wish to engage in an uncomfortable discussion. Perhaps, I privately worried, these views were shared.

Had there been other such precedents for such an outrageous call? I searched the NIH Library of Medicine expecting to find dusty accounts of academic boycott impacting a bygone South Africa, not because I equate Israel with Apartheid, but because I grew up in England aware of the trade boycotts against South Africa at the time. Trawling through the medical literature, I stumbled across reference after reference on academic boycott against Israel. Apparently a vigorous debate had been unfolding for some time. When I began quizzing my US physician colleagues, I found they were as surprised as I. This controversial discussion had been going on under our radar. Soon I encountered papers calling for academic boycott against China, finally a series calling for boycott against Saudi Arabia.

Had a Saudi boycott actually transpired, my career would have been significantly limited. Because of my excellent American mentors and their training, I could share some of the finest aspects of an American medical education and in return be informed by their unique and extraordinary medical expertise. Intellectual capital remains America's best export, priceless in the post 9-11 era. That's something even MasterCard cannot buy.

Israel and its physicians, scientists and artists are no different. We need their intellectual capital just as much. The Senate at the University of Johannesburg understands this, voting to defend their right to engage with Ben Gurion University this week, despite mounting pressures to cancel their academic collaborations. The extraordinary successes Israelis have demonstrated through a nearly peerless intellectual aegis is something all of us must learn from, particularly within the surrounding region. David Brooks expressed this best earlier this year writing about the The Tel Aviv Cluster. Boycotts, like the one proposed by The Lancet seek to put a stop to exactly such valuable exchanges.

I am learning that the acquisition and dissemination of knowledge, very much in the spirit of tikkun olam is a quintessentially Jewish pursuit. My friend Alex explained to me recently that central to being a good, believing Jew is a deep sense of responsibility to serve others, including non-Jews like me. This is very similar to the value placed on knowledge within Islam, in fact, which must be shared to serve others. Ironically, this appetite and ability for knowledge has been very much to the world's benefit, despite pervasive hostility to God's firstborn.

But what has this to do with a theater in a West Bank settlement?

An internal cultural boycott focused on Jewish Settlements in the West Bank muddies the water in favor of those eager to condemn Israel and less willing to apply careful thought. To my mind, this instance of boycott adds to Israeli societal polarization at a time when national unity could never be more critical. Wondering what the Jewish view might be, I asked my thoughtful friend for his opinion. As so often, Richard's response surprised me.

It shows that Israel is a free country where people can express what they think. The same can't be said about the Palestinians; there haven't been any Palestinian peace rallies against suicide bombings or for the release of Gilad Shalit. There are Israelis who think settlements are a bad idea and have no reason to be afraid to express their views.

He didn't sound remotely upset with Israeli Jews for their protests. For sure, the freedom to express boycott does indicate an unfettered, confident populace. I could never imagine a boycott in Saudi Arabia, or Pakistan where lawyers protesting the removal of Chief Justice Iftikhar Muhammad Chaudry are briskly muzzled by the military and sent packing while justice is yet again dismantled. Israelis and their press are some of the most vociferous critiques of their government's policies, so Richard's observations made sense. But quickly, he reminded me of the importance of a distinction between this kind of boycott - of Israelis against other Israelis- from the boycotts writers in The Lancet appealed for. He continued...

....not to be confused with the overall boycott of Israeli professors or (Israeli) products because of the settlements, which is in fact antisemitism and not a Mid-East policy issue...

While Richard is correct - the Israelis objecting to Ariel's theater are not anti-Semites -I fear an increasingly hostile anti-Israeli world is much less likely to make this distinction. Instead, activity of this nature (while a function of a healthy citizen politik) lends fuel to the fire of anti-Israel sentiment and ultimately risks inviting ever greater pressure for Israel's isolation.

Paradoxically, precisely such pressures ultimately seek to silence some of the very same Israelis who are themselves calling for the boycott of Ariel, voices like that of Amos Oz, one of my favorite writers. Daniel Barenboim's signature to the petition supporting the Ariel Boycott saddened me particularly. Eventually, he himself may find his organization and their remarkable efforts the subject of boycott by narrow-minded individuals -emboldened by this climate tolerant of boycott - who either do not believe Israelis and Palestinians can collaborate, or believe (because of their vehemently anti-Israeli stance) Barenboim's do-gooding must be strangled in its infancy

Boycott is a blunt instrument. Boycotts focus on arresting the most valuable yet vulnerable freedoms: freedom of thought. Like a cluster bomb, boycotts are not particularly surgical in its strike, instead reeking extensive collateral damage. At an individual level, boycott strangulates one career. At a national level, boycott penalizes a critically important and growing sector integral to effective counter terrorism and national security: citizen diplomacy. Normally encompassing acts of service by one nation to another (the US rebuilding of maternity hospitals in Afghanistan or the pro bono relief work of the IDF in Haiti for example) diplomacy across divides can also accomplished by individual acts of public service. Israel, like the United States, has long been a setting for cross-cultural academic collaboration, whether in medical training programs, organ donor programs, collaborative research or cultural endeavors.

Whether we work in blood-stained operating theaters or in star-studded performance theaters it is exactly these apolitical opportunities which empower entire societies. Should the global medical academe move to exclude any nationality from international dialogue, including an Israeli national, my profession will penalize exactly those sectors of society best placed to provide hopeful counterpoints to mainstream assumptions.

The same holds true for artists. Silencing academics or artists through the misplaced moralizing of boycotts is a mistake of grave proportion . While Israelis understand an internal boycott to be an expression of impassioned democracy, enemies of Israel see this as yet another opportunity for her delegitimization.

Medicine, science and the arts must remain unbounded, free within pristine cathedrals, even in the context of disputed territories. Protecting these precious spaces is a shared responsibility which stretches across borders, religions and politics.. As physicians we have long relinquished autonomy in the field of science and medicine to the oleaginous interests of industry. We have learned from this. Let us not make the same mistake in relation to politics.

I support all Israeli scientists, physicians and artists and their academic efforts without restriction, and those who collaborate with them, because I am enriched by such collaboration both to my benefit and that of my practice of medicine. If I had been denied these opportunities, my views as a Muslim woman and my abilities as a physician might have been quite different. For others to be denied the same cannot go unchallenged. That applies to the Jewish settlers of Ariel too. Let politicians determine boundaries. Let artists and academics instead advance the limits of intellectual freedom not restrict them. Disputes over settlements can be battled without scuppering some of the best platforms for public discourse in an increasingly fractious world.Whether chairs of medicine, or studio bosses, whether musical impresarios or scientific investigators, whether theater directors or opera managers, all of us need to raise serious objection to any cultural or academic boycott both within Israel and external to Israel.

Boycott is often a sanctimonious expression of moral judgment and always an imperfect one. But before passing flawed judgment, a careful examination of the moral cost of such judgment would be wise. Let us not seek to magnify already enormous losses. We can ill afford them. Like it or not, we all need a vibrant and globally engaged Israel, much more than you may think.