Do you ever wonder if how you feel on a given day has anything to do with what millions of others are feeling or doing? Or if your mood is somehow contributing to a larger, collective mood?

Stockbrokers talk about "investor mood," historians the "zeitgeist." In a recent post, Arianna Huffington wisely called for a strengthening of our "collective immune system."

The term "collective consciousness" has been used to refer to the overall social atmosphere that arises from the thought and behavior of all the individual members of a community or society.

As stress and tension build in collective consciousness, the resulting social incoherence agitates individuals and groups within the society. According to Maharishi Mahesh Yogi, "All occurrences of violence, negativity, conflicts, crises or problems in any society are just the expression of the build-up of stress in collective consciousness. When the level of stress becomes too acute, it erupts into crime, violence, war and social disorder."

To create a more harmonious national atmosphere, many are calling for greater civility and cordiality in our political discourse; others urge us to do some "soul searching" and renew our national purpose. More respectful conversation may soften the debate, and pausing to reflect might clarify our higher goals. However, if a nation's collective consciousness remains acutely stressed -- with tension and discord seething barely beneath the surface -- what will prevent that collective stress from breaking out into violence?

The wisest approach might be to somehow defuse collective tensions before they erupt as destructive behavior.

If we're all interconnected through the fabric of collective consciousness, could society be dramatically transformed by a sufficient number of people creating a positive influence -- say, by practicing a meditation technique designed to defuse stress and enliven orderliness within the brain and human consciousness?

The notion that the world is independent of our minds was overthrown a century ago by quantum mechanics. Yet a scientific understanding of how interconnected we all really are -- with one another and the universe -- is just now coming to light.

Progress in theoretical physics during the past quarter century has led to a progressively more unified understanding of the laws of nature, culminating in the recent discovery of unified field theories based on the superstring. These theories locate a single, universal unified field at the basis of all forms and phenomena in the universe.

While Superstring Theory and M-theory are undergoing important refinements, the consensus among leading theorists is that the unified field exists. "What we've discovered at the foundation of the universe is a universal field where all the forces and particles of nature are united as one," says Dr. Hagelin. "They are ripples on a single ocean of existence."

Yes, says Dr. Hagelin, and if we go deep enough in meditation, we can experience this core reality -- the field of unity within.

Although Western science currently has no commonly accepted understanding of consciousness to affirm or deny how consciousness relates to the unified field, for thousands of years the world's great meditative traditions have identified an underlying, non-material field of order unifying mind and matter. The Vedic tradition specialized in developing techniques for opening human awareness to this core unity of life.

"Our minds profoundly mirror the hierarchical structure of nature," says Dr. Hagelin. "We can dive within to deeper levels of mind, accessing more powerful levels of thought and ultimately the unified field itself, the most powerful, limitless, universal level of our own consciousness." 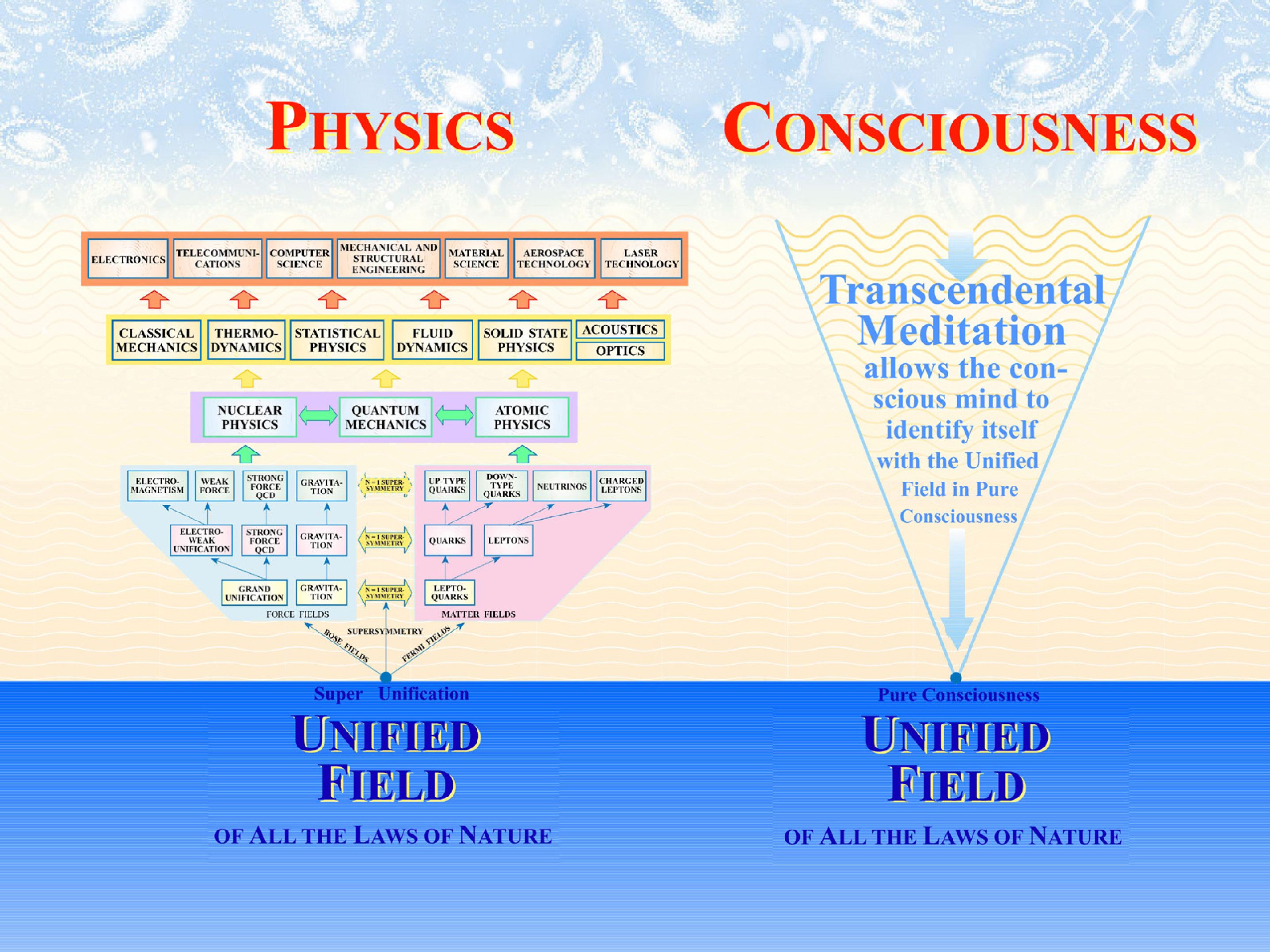 For some, it may be surprising to hear that scientific exploration of deeper levels of nature, from the molecular to the atomic, nuclear and subnuclear, might have led us back to ourselves -- that the fundamental field underlying all of nature is indistinguishable from the deepest level of the mind. Yet since the beginning of recorded history, sages have reported experiencing a transcendental field of oneness, the source and substance of everything, and not only in the East. "Within us is the soul of the whole," said Emerson, "the wise silence, the universal beauty, the eternal One."

The leap for Western science involves recognizing consciousness as something more than brain functioning -- as a thing in itself, a fundamental field.

Meditation: A technology for peace and social change

Dr. Hagelin cites numerous studies on the Transcendental Meditation technique that measure, using advanced statistical analysis, the power of group meditation to change the social climate: "In the summer of 1993, this approach reduced crime by 26 percent in Washington, D.C. An earlier study on the Lebanon war showed profound reductions in open warfare. These results have been confirmed repeatedly through extensive research published in leading, peer-reviewed scientific journals."

Neuroscience shows that the brain becomes highly coherent during TM practice. "The orderliness of brain functioning in the individual spills over into society," says Dr. Hagelin. "Since the unified field is an all-pervading field at the basis of consciousness and matter, when unity is enlivened in the individual, unity is enlivened everywhere. This is a field effect of consciousness."

Knowing that we're all interconnected -- on a level deeper than Twitter or Facebook -- makes it easy to understand meditation's silent, transformative influence on collective consciousness.

Certainly much work is needed to improve education, economics, health care and other areas. But for social programs to flourish there must be a supportive, coherent social atmosphere.

Meditation is a means for each of us to make a powerful, personal contribution to the collective peace and coherence, strengthening life in the way that's needed most -- from within.

VIDEO: John Hagelin on Consciousness and the Unified Field: