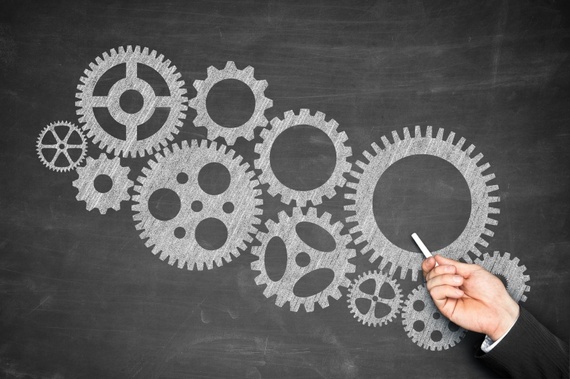 When we think about the bottom line in business, whether in the corporate arena or the entrepreneurial space, the immediate jump in processing is fiscal -- how much value do we have in terms of cold hard cash? What sort of reserves do we currently hold; what sort of profit margin do we have in place? Brass tacks of course -- are we in the red, or the black?

In a world business environment that is only growing more and more unstable, fast-paced and demanding, however, the bottom line needs to be about more than a monetary focus. The consumer can have what they want, when they want it, with a constant stream of new products, new apps, new concepts, and new information, that are downloadable, deliverable and easily digestible 24/7. Just because you were the best five minutes ago, doesn't guarantee that you will be five minutes into the future -- particularly if you aren't willing to think outside the leadership box. In fact, if you are serious about future-proofing your business, then you not only need to be ready to think outside the box, but to understand this key thought process.

That box? You have a team who are dying to assist you in opening it, looking at its design, its hardware, its performance in the marketplace, to show you points about its weaknesses that you may not have been willing to admit to. You have smart, able, brilliant team thinkers who are ready to turn that box into BOX 2.0 and release it to the market as the new must-have in cube shaped containers.

Collective or collaborative intelligence on a commercial level is the new currency. Appreciating the value of an 'Intellectual Bank' and what it brings to your business is not just forward-thinking on a theoretical level, it's a bottom line positive as well. As leaders, as colleagues, the opportunity to engage on a team level brings strategic power to an organization or enterprise that is simply not possible with people working on an individual basis -- in the 'me' space. There is no sharing of thoughts, or discussion that leads to development.

Move into the 'we' space however -- that space of collaborative team engagement -- and the thought space opens up.

Take the example of Apple. Steve Jobs was the visionary; but was he the only big thinker within the company? His death led many to predict that it would take a nosedive in market share and profitability. But Jobs was the first to say that the reason for Apple's success was the strength of the team. As he famously stated '...innovation has nothing to do with how many R & D dollars you have. When Apple came up with the Mac, IBM was spending at least 100 times more on R & D. It's not about money. It's about the people you have, how you're led, and how much you get it.'

This year saw Apple CEO Tim Cook announce record first quarter profits, and he said '...the execution by our teams to achieve these results was simply phenomenal'.

The value of team thought means improvement and innovation. Let's go back to that box. If you were given the 'BOX 2.0' project to work on alone, then chances are it would turn out pretty well. But put a team of big thinkers on it? You have discussion, different skill sets, negotiation on concept and vision. There is engagement on what BOX 2.0 needs to be a success for the company -- and that engagement will lead profitability.

The isolation of working alone is endemic in making that bottom line look less a healthy solid black and more of a watery grey. Take your own performance structure as an example. If you are constantly focusing inwards, seeing only what you need to do to achieve your own KPIs and bonus targets, you miss out on banking others' knowledge. It's rapidly becoming apparent that skills are an increasingly valuable commodity for both corporates and entrepreneurs alike. You could for example, suggest to a teammate that you 'swap' a skill for a skill -- teach each other something you previously had no knowledge of. It will stand you in good stead.

Collaborative thinking in a team environment also means the ability to effect change. If you think that an idea could be bettered, or that your workplace has unacceptable conditions for members of your team, then as a group you have the ability to use your collective voice. Yes, this may mean collaboration rather than isolation may be uncomfortable in the short term, but the long-term rewards benefit the team rather than the individual.