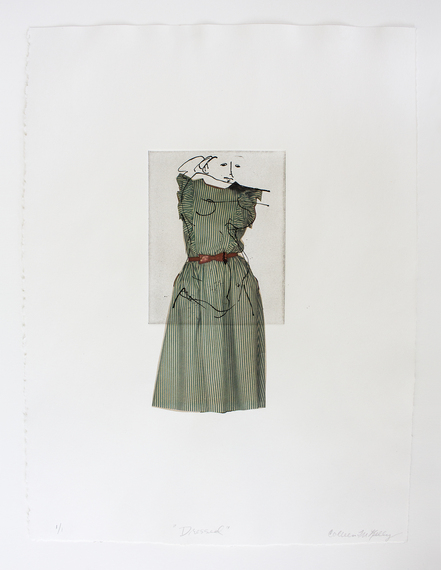 Like paper dolls from the latter days of Mad Men, altered by a presence of physical graffiti, the monotypes with chine collé in Colleen M. Kelly's disarming series Naked Under Her Clothes are subversive and subtle, sexy but not sexual, traditional and unconventional, subliminal and right there on the surface. What appear to be expressive nudes rendered in a language of gestural, eccentric line drawing, draped in transparent or translucent retro fashions, is in fact nearly the opposite. The nudes did come first -- but in these prints, they exist on top of the clothes, hovering over the garments even as they occupy them. This paradoxical and slightly hallucinatory format is both the literal result of the chine collé print studio process that produced them, and the conceptual consequence of the political circumstances that inspired them -- plus a healthy dose of serendipity and resourcefulness in creative problem-solving. 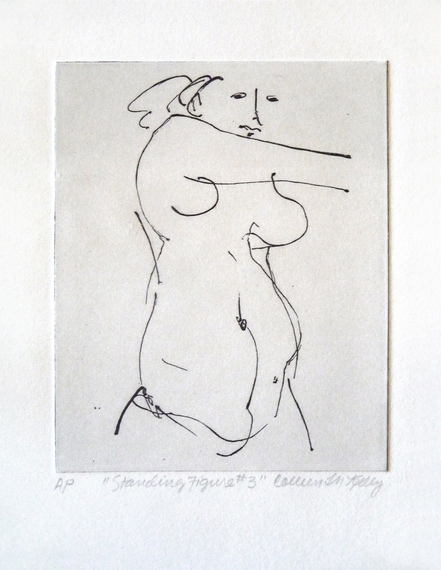 In the case of Naked Under Her Clothes, the context of creation and the particulars of process are even more salient than usual to the meaning of the work -- integral in fact. She had been working for some time on these charming, slightly eerie nude studies, in the vein of Picasso's expressive single-line Vollard Suite etchings or even the whimsical near-abstraction of John Lennon's own drawings. At a certain point, Kelly was unexpectedly confronted with the need to comply with a nudity ban at the county art gallery in Santa Barbara where she was planning to exhibit them. Naked Under Her Clothes thus came to represent a response to this outrage, tapping into her deep and enduring feminist roots along with her sense of irony and humor. And all of this is contained not only in the visual language of her images, but in the serendipitous method by which she was able to construct them. 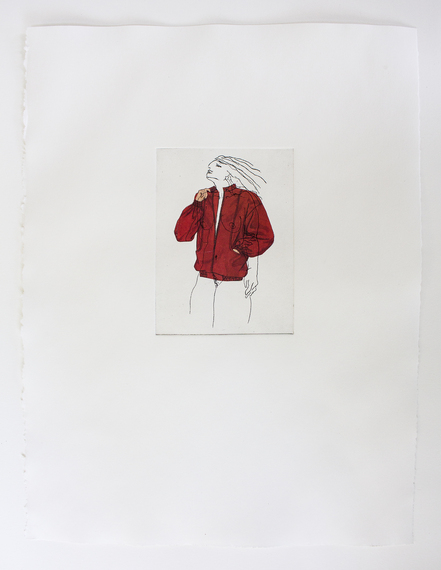 Vintage dress-making patterns were, oddly enough, quite plentiful in the print shop where she works. They were commonly salvaged for the tissue paper, while the envelopes printed with quirky and colorful sketches of the clothes were discarded. The plate sizes of Kelly's nudes is generally small, under six inches, and it turned out that the models on those envelopes were about the same size as her figures. The idea took hold rather quickly, and Kelly began "dressing" her figures accordingly. But what began as a political workaround soon took on unique formal imperatives and an inner life of its own. Although the "dressed" figures constitute a self-contained series, Kelly often chooses to show them in pairs or otherwise matched up with the original nudes in their birthday suits. This generates among other insights, the realization that the same anatomical armature is capable of telling wildly different stories depending on what they are wearing; and furthermore, one can see the same nude wearing different outfits and yet barely recognize her even when it's pointed out -- just like in real-life fashion. 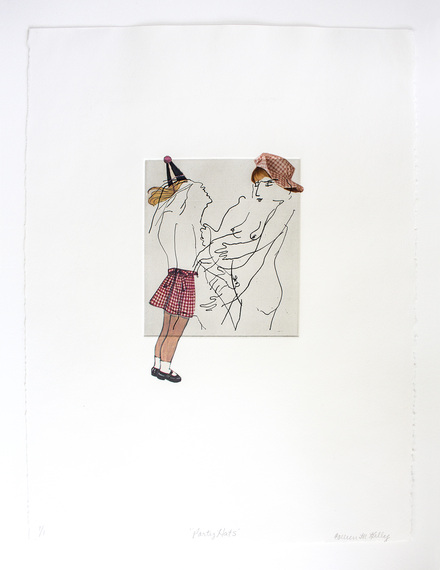 On most of Kelly's prints, the chine colle᷇ "escapes the matrix" -- a term with a wonderful semiotic expansiveness simply indicating that the applied image sits beyond the frame created by the edges of the etched plate. Cheeky gingham frocks, crisp trouser pleats, sweeping chiffon ballgowns, flowing scarves, stockinged legs and elegantly shod feet unfurl over the threshold. Sometimes arms and legs are all that appear from the pattern, leaving the nude undressed save for boots or a charming hat like in that old Randy Newman song. The visual effect is assertive and eccentric, providing the image with a sense of movement and narrative emotionality. In a sense it's really another kind of matrix altogether that they are escaping -- the frame of civic dominion, conservatism, and body shaming that had threatened to trap them in a quagmire of misunderstanding. 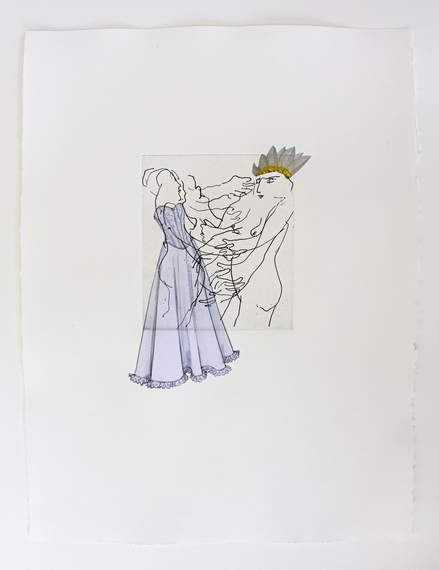 Naked Under Her Clothes opens Saturday, June 27, 6-9pm, at Gallery 825 in West Hollywood, and continues through July 24. 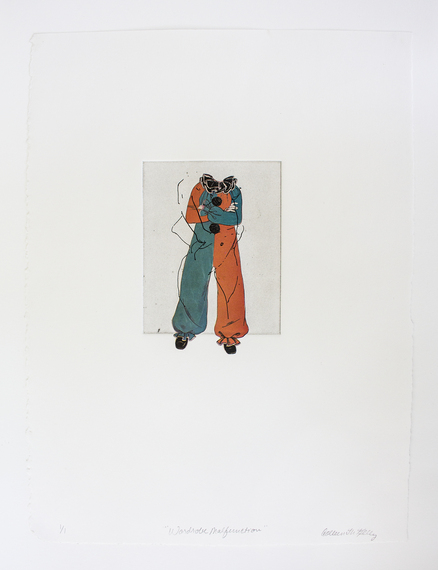