College applicant pools are deeper than ever. The slightest thing -- a B instead of an A or a typo in the essay -- is enough to push an admissions decision from a yay to a nay. Over the last few years, the competition has only become stiffer, especially at elite colleges. The message from colleges to students is: We want you to be authentic... and perfect. But, when the tables are turned and colleges are trying to impress accepted students and get them to enroll, authenticity and perfection are often tossed aside like denied applicants. 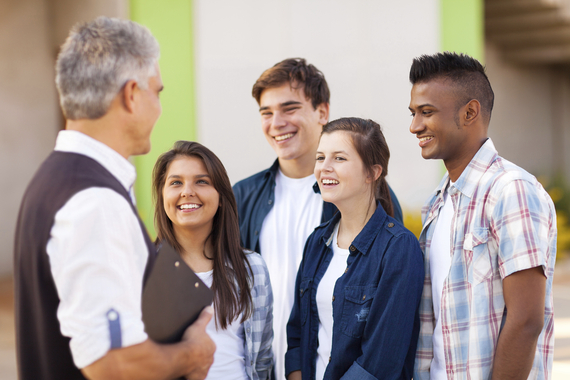 Every year, we hear about colleges sending the wrong admissions decisions to students. This year, the University of California Santa Cruz sent thousands of emails to students from Maryland and Virginia congratulating them on their acceptance and inviting them to a reception. Not only did those students not get admitted, they never applied.

Last year one of my students was denied by Johns Hopkins University in Early Decision. Two days later she and hundreds of other students who were also denied received an email welcoming them to the Class of 2019. The university apologized for its mistake, but stood firm that the original notification was the correct one and no decision would change. Just imagine if these kids made as big a flub in high school. They wouldn't get a second chance.

When students finally get admitted, there is a paradigm shift as colleges engage in an elaborate game to maximize student enrollment. There are gimmicks like MIT's release of admissions decisions on March 14, a clever reference to the mathematical constant Pi. There's the Publisher's Clearinghouse Sweepstakes approach where the College of Holy Cross uses members of its community to hand-deliver acceptance letters. Most colleges rev the engine of social media to stoke anticipation leading up to the release of their decisions. This grand show is all part of a college's elaborate plan to "yield" a freshman class on target.

Yield is big business in college admissions. It is the percentage of admitted students who enroll, and colleges want their yield rate to be as high as possible because it reflects popularity and desirability in the eyes of students. There is tremendous pressure on colleges not only to deliver acceptances this time of year, but ultimately to enroll a freshman class better than the previous year.

All eyes are on May 1, the date when enrollment deposits are due. This is each college's day of reckoning. One might argue that it's somewhat fitting. After all, students go through so much stress applying to college, constantly wondering if they've done enough to prove their worth. Now it's the colleges' turn to show that they are worthy.

Once they've been admitted, students need to evaluate each college's authenticity. Colleges will use an array of tactics to get students to enroll. At this stage of the game of yield, it's the students who have the power. They can decide whether heartfelt genuineness or enterprising intent wins the day.

Handwritten notes from admissions officers, phone calls from current students, and local receptions are all ways colleges leverage their home field advantage with admitted students. Colleges also encourage students to return to campus for "accepted students" events where they regale them with meals, panels, fairs, and overnight stays. The campus grounds are surreally dappled with bright flowers and freshly laid mulch. Some students will receive free transportation to visit campus. For others, hefty scholarships will be offered to sway them to enroll.

All the freshly planted flowers, free gear, and smiles of the admissions staff are meaningless if a student doesn't feel genuinely welcomed by the individuals who really matter on a campus. Current students and professors are ultimately the people who will shape a student's experience in college. When those individuals are absent or lacking in some way, students should take note. Because as much as admissions officers make students feel special, their role fades quickly once the students enroll.

In the end, students need to look beyond the platitudes. Until May 1, colleges put on an extraordinary show to woo the admitted students. As flashy and enticing as some of this will be, students should seek an authentic connection between a college and themselves. It's the real conversations, the classroom experiences, and the genuine feelings a student has when the college isn't trying to win their deposit that really matter.