The national push to increase the number of Americans with college degrees is enriching at least one key beneficiary: the College Board, the nonprofit organization best known for administering the SAT.

Eleven states and the District of Columbia have each agreed to pay the College Board anywhere from several hundred thousand dollars to more than $1 million a year to test students in hopes of boosting their college-enrollment numbers, and the College Board is actively promoting its products in other states.

These deals are likely to further increase the College Board's net revenues, which hit $65.6 million in 2010--the last year for which the figure was available from tax filings--up from $53 million the year before. The test supplier paid at least two dozen employees over $230,000 in 2010. Its president, Gaston Caperton, earns more than $1 million annually--almost double what he made in 2005--and has a $125,000 expense account.

"They're a very profitable nonprofit organization," said Brad MacGowan, college counselor at Newton North High School in Newton, Mass., a Boston suburb. "They always seem to be coming up with a new product or service to push testing into younger grades or make states give the SAT to every student."

Ten states and the District of Columbia also pay for the College Board's PSAT test to be given at no cost to their students. Three--Delaware and Idaho since last year and Maine since 2005--require and pay for all high-school students to take the SAT. Last school year, Texas also required school districts to pay for the college-readiness exam for every student who wanted to take it, although it eliminated the program this year due to budget cuts.

Officials in both Delaware and Idaho said the legislation requiring all students to take the test was passed with no input from the College Board. But documents show the group has a lobbying presence in a number of other states.

In Massachusetts, the College Board paid a lobbying firm $24,000 last year to support "general outreach on education issues, specifically Advanced Placement, PSAT and college-readiness matters," according to lobbyist disclosure forms. Also last year, in Indiana, a College Board lobbyist pushed for a bill to allocate $500,000 for ACT/SAT test preparation. And the College Board, which also administers Advanced-Placement exams, has tried to make AP classes mandatory in every California high school.

The other states that pay the College Board for PSAT services are Arkansas, Connecticut, Florida, Georgia, Indiana, New Mexico, Oregon and Texas.

"They're out there freewheeling, doing whatever they want, doing it however they want to do it, and no one is telling them 'no,' " said Kenneth LaValle, a Republican in the New York State Senate and chair of the state's Higher Education Committee.

The College Board acknowledged that it often talks with policymakers.

"We regularly speak with state education officials and district administrators about how our programs and services can help them increase college readiness," College Board spokeswoman Kathleen Steinberg said.

Nationally, in the Class of 2011, more than 1.6 million high-school seniors had taken the SAT, a 30 percent increase from a decade ago. The test costs $49. Sending SAT scores to up to four colleges is free, after which it costs students $10.50 for every additional college. Rush delivery is an additional $30 per school. AP exams cost $87 each, and students took 3.1 million of these tests in the 2009-10 school year.

Caperton's salary increase since 2005 alone could have paid for the PSAT to be given for free to almost 34,000 students. And the College Board's revenues in excess of expenditures last year were enough to have provided a refund to every student who paid full price to take the SAT.

The College Board said it puts its earnings toward new products, services and advocacy. Last year, for instance, it spent $54.2 million on fee waivers for low-income students who take its tests.

Some higher-education officials have criticized the SAT, calling it a narrow measure of college readiness. Others have said it favors students from wealthy school districts. A small but growing number of colleges are moving away from requiring standardized test-scores for admission.

Legislators, though, hope that offering the SAT and PSAT for free will improve college-going rates.

"I think those programs can be really valuable in that they emphasize a college-going culture," said Robert Laird, former undergraduate admissions director for the University of California at Berkeley. But Laird added that if a student is required to take one of the exams and does poorly, such programs also can backfire and discourage students.

"To maintain their true nonprofit status, they do advocate for certain programs," MacGowan said of the College Board. "That's ironic in a lot of ways. Here's an organization that has a test that definitely favors higher-income students and disadvantages lower-income students, and they come out with all this rhetoric that tries to make them look like an organization that advocates for the poor and oppressed. They're one of the biggest gatekeepers [in college admissions]." 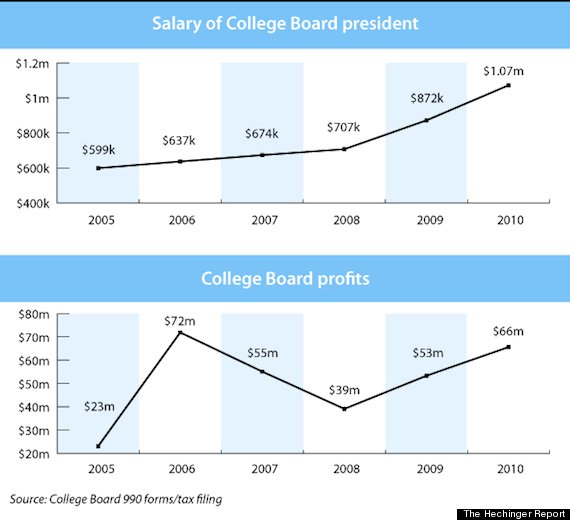 CORRECTION:This story has been updated to correct the amount of College Board employees earning $230,000 annually. The story originally reported that a quarter of the organization’s employees made $230,000.