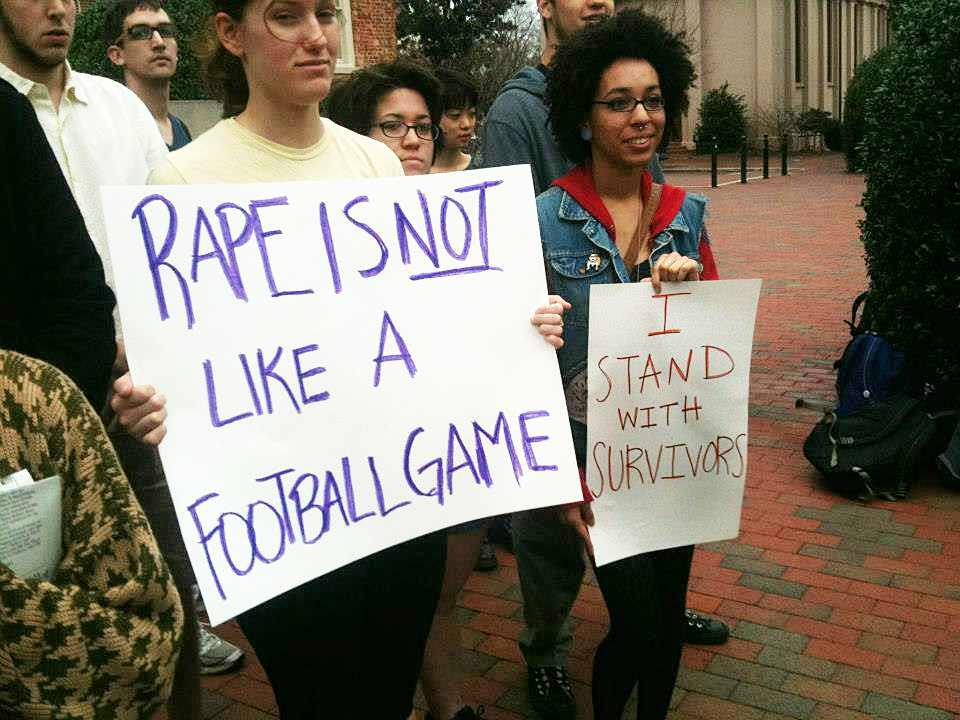 Upon receiving an acceptance letter to the University of North Carolina at Chapel Hill (UNC) three years ago, my only expectation was that I was going to be the first one in my family to graduate from college. I never thought that I, as an active student educator who taught violence prevention and bystander education, would find myself pinned to a wall and partially unconscious during my biggest nightmare. It took me a long time to call it by its name, rape, but it's hard to forget what it's like to have your entire being taken from you -- your control, your breath, and your pulse, stolen by the hands of another. It couldn't have happened to me.

Within the realm of higher education, our society struggles to understand that sexual violence happens not just at other universities, but at our universities. Administrators treat sexual violence as an issue of legalities and public relations, responding to its prevalence as a threat to individual university prestige and reputation. By doing so, universities fail to properly respond to the alarming danger that college students are facing in our country. Thousands of students are unexpectedly pursuing an education at hotbeds for sexual violence, and we as a society have yet to recognize this as an epidemic.

Nationally, 42 percent of college sexual assault survivors tell no one about their assault, each facing the institutional challenges of silence, shame, and betrayal. Every story is different, but these three elements are consistent in hundreds of stories of survivors.

Redefining rape is becoming the go-to solution for reducing the conversation around the growing prevalence of sexual violence. Politically, the spectrum of what constitutes assault has been reduced to what can often feel like an impossible checklist or comparison chart. No one talks about sexual violence, and its prevalence lingers in silence behind the societal obsession with categorizing the severity and validity of survivors' experiences. I can recount the bloodshed, the bruises, the scars that are still on my body, and the mental trauma that affects me daily since my assault; but whether my assault constitutes as "forcible" or "legitimate" is not the question. The real question is, why are we as a society so determined to not treat every act of sexual violence with the determination it requires?

Dana Bolger, an Amherst student and sexual assault survivor, states in her review of the Amherst College Report on Sexual Violence, that this type of culture "reinforces a popularly held notion of what 'real' rape looks like: a violent attack on a young, virginal, sober woman by a strange, scary-looking man in an alley." This culture of silence is detrimental to survivors, because it reduces the conversation to a taboo, an impossible nightmare that just "doesn't happen here." In early 2012, the Federal Bureau of Investigation (FBI) revised the federal definition of rape to include language for male victims, and what were seen as non-traditional rape victims. It also changed the language that accounted for only "forcible" sexual acts, and became more flexible for assaults involving victims who did not verbally resist because fear or intimidation. But culturally, there is still a systematic fear of accepting rape as a reality; which in turn, reduces the confidence of survivors that seek support.

Nationally, 48.8 percent of women who are raped initially do not consider what happened to them to be rape, even if the assault itself rivals the most horrific cultural expectations of assault. Accepting the reality of sexual assault is one of the most difficult obstacles that a survivor of sexual assault will face, because often times, "coming out" brings the next difficult hurdle: shame.

Across the country, college students are facing the burden of shame when coming forward about sexual assault. "What makes shame so powerful is its ability to make us feel trapped, powerless and isolated. What makes it so dangerous is its ability to make us feel like we are the only one," explains Brené Brown, renowned researcher on the effects of shame on social interaction. The reality is that, at their most vulnerable state, survivors are isolated and continuously re-victimized when seeking support after their assault. This is because the silence around sexual violence feeds a hostility that bars survivors from finding a community after the assault, and instead fosters a culture that is unsupportive and retaliatory -- a culture of shame.

Universities perpetuate this shame by addressing sexual violence reactively, responding only to "serious" allegations or threats to reputation, rather than proactively confronting the prevalence of sexual violence itself. "While administrators acknowledge an imperfect system, they [do not] admit the ways they directly and indirectly harm student survivors and enable perpetrators of sexual violence," Tim Longest, a UNC student, states, responding to the UNC Chapel Hill administration's denial of specific allegations, and refusal to comment on the disturbing stories of survivors that claimed institutional abuse when seeking university support. This type of response triggers a systematic shame in every survivor that feels lost in the silence of their trauma. This response, in turn, takes the form of betrayal.

Every university in our country is falling victim to the temptation of pursuing "basic" compliance, allowing a façade of false safety to continue, and the serious trends of student endangerment to be tossed with indifference until they build up. Many universities claim that safety comes first, and that resources are transparently communicated to all students, but, what universities have not realized is that the tolerance of institutional silence around rape, and perpetual shame when coming forward enforces a culture of betrayal. In college, students are not intentionally exposed to the conversation of sexual assault -- "Rape doesn't happen here."

Universities do not talk about rape, and as a result, when a survivor comes forward, victim-blaming is the natural response: "How high was your skirt?" Reducing the conversation, and focusing on compliance instead, they betray the safety of students and allow the university environment to become the most fertile environment for rape culture in our country. Behind a mask of low statistics, the greater problem continues to flourish: rape continues to threaten students, and hundreds of rapists continue to graduate and enter society with the support of their university accreditation. In the midst of this, survivors continue to struggle in isolation after their assault, betrayed by a system whose level of compliance fails to keep up with the silent epidemic of sexual violence.

Every two minutes, somewhere in America, someone is sexually assaulted, but by treating rape as a taboo, we are perpetuating the silence, shame and betrayal that allow sexual violence to thrive.

Dana Bolger, who is one of the initial students that sparked the conversation at Amherst College, states that, "if we restrict ourselves to such a narrow and false view of what rape, victims, and perpetrators actually look like, we will surely fail to respond appropriately to rape on a personal level (as friends, for instance), as well as on an institutional one."

Universities, as prime institutions for building leaders, innovators, and scholars must stand on the right side of history and begin to proactively address rape culture.

But it takes each one of us to make this happen.

The conversation around sexual violence will always be difficult, but we must acknowledge the collective responsibility that we have for giving the problem the voice that has long been taken away.

In a speech at the University of New Hampshire in 2011, Vice President Joe Biden stated that "Rape is rape is rape. The sooner universities make that clear, the sooner we'll make progress."

It's time for us to break the silence around the "R" word.

It's time we realize that addressing sexual violence is not about responding to allegations, complaints, or federal demands for compliance. Using these as motivators is just plain wrong.

I was raped at my beloved Carolina; rape happens here.

And it happens at your university too.

It's time to take back the conversation.