Over the past three decades, the inflation-adjusted income of the median American family has basically remained stagnant. The same can’t be said of college costs, which have simultaneously surged to almost unrecognizable heights, according to a new report by the left-leaning Center for American Progress.

Costs at private nonprofit four-year colleges have increased by more than 150 percent since 1982, but the real trouble is at four-year public schools, where inflation-adjusted costs have experienced a startling 250 percent jump.

It’s not so difficult to understand how this puts families in a bind. As of 2011, only half of American households could claim an income of more than $50,000, according to the U.S. Census -- a number low enough to make paying for a child’s college education appear more dream than reality.

And by many measures, college is more important than ever. As the CAP report states, “almost two-thirds of jobs in our economy will [soon] require some type of education or training beyond high school.” Already today, the unemployment rate among college students is around half that of the national rate. College graduates also earn roughly three times that of high school dropouts.

This all adds up to a $1 trillion national debt crisis. And to make matters even worse, rates on some loans are set to double on July 1.

So perhaps you see the conundrum. If not, here’s an (admittedly depressing) chart: 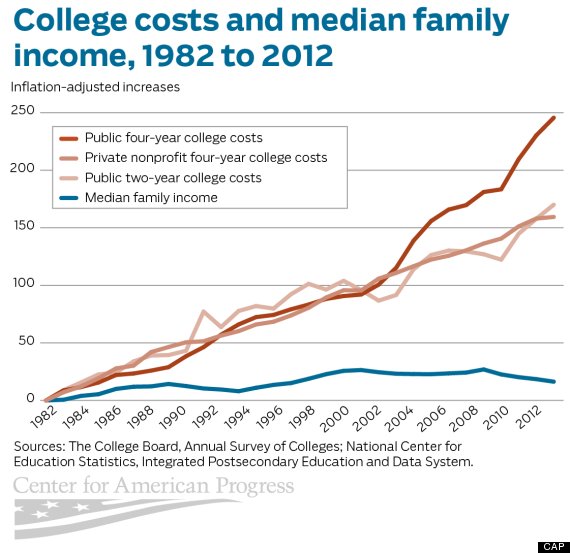