A college degree will still be worth the money until the year 2086, according to a report from Hamilton Place Strategies.

The report used the work-life earnings data of college graduates compared with earnings of high school graduates, using information from the U.S. Census. The report then used National Center For Education Statistics data "collected over the past 40 years measuring average tuition, fees, room and board in 2011 dollars" to measure projected growth of the cost of college. The point at which to two items intersect is the year 2086. 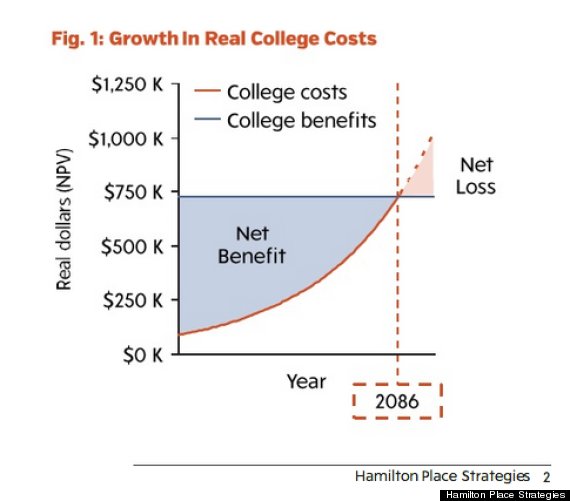 "The same model projected it would be more attractive to get an associate’s degree, rather than a bachelor’s degree, in 2065," the report stated. "The considerable time between now and when a college degree is no longer profitable speaks to how valuable higher education is in today’s economy. College remains one of the best investments there is."

The Hamilton Place Strategies report adds to an analysis released by the Pew Research Center Tuesday showing the earning gap between young adults who only have a high school diploma and those with a college degree stretched to its widest level in 48 years. Young adults with a diploma and no degree can expect to earn 62 percent less than the typical salary of college graduates, the Associated Press reported, down from 81 percent in 1965, the "earliest year for which comparable data are available."