As some colleges overreact to a disease that virtually no one on campus is at risk of contracting, students are skipping an easy step that actually will help them stay healthy: seasonal flu vaccines.

"[Ebola] is still very low-risk for the majority of the population, but flu is not," said Lauren Drinkard of the University of Pennsylvania's Student Health Service. "The flu spreads really easily, especially in institutions like a university."

Yet according to professor Janet Yang at the University of Buffalo, only about 8 percent of college students received the flu vaccine in one recent year.

Public health experts have been trying to figure out to persuade more students to participate -- for their own sakes and for the sake of their campus communities.

College Students Are Missing Out

It seems like flu shots should be an easy sell on campus.

The flu vaccine is "the best way to reduce the chances that you will get seasonal flu and spread it to others," states the Centers for Disease Control and Prevention, and should be administered by October every year. Many colleges make getting vaccinated easier by offering flu clinics on campus with free or low-cost vaccines. And as Beth Kotarski, director of Swarthmore's Health and Wellness Services, noted, "college students are in all a very empathic group," willing to act to help others.

In 2010, after the H1N1 pandemic, Yang surveyed 370 college students about the seasonal flu. Among her sample, only 13 percent had received the vaccine during the previous flu season.

Yang suggests that social influence has a significant impact on vaccine rates and that college providers of health information should try to take advantage of that -- by pointing out, for example, that their classmates need students to get a vaccine to protect the community.

Why They Don't Get Vaccinated

Young adults may not be at the highest risk of death from the flu, but the illness can kill people of any age. It hospitalizes some 200,000 a year, according to the CDC. In the best-case scenario, it can sideline those with papers to write, tests to take and games to play.

But because it is a ubiquitous, annual disease, it "kind of becomes old knowledge that especially college kids don’t even pay attention to," Yang said.

Students have what Yang calls "unwarranted optimism" about their own health: They do not see the flu "as a personal risk and tend to overestimate how safe they truly are."

In her study, Yang tested participants' factual knowledge of the illness. Most students, she found, overestimated what they knew.

This overconfidence, Yang said, interferes with their obtaining the real facts about the disease and the vaccine. Instead, she found that some acted based on false information, including students who didn't get the vaccine because they had heard people became sick from it. (In fact, you can't get the flu from a flu shot.)

Economics professor Ellen Magenheim and assistant professor Erin Todd Bronchetti at Swarthmore College in Pennsylvania, along with former colleague David Huffman, examined what makes an effective flu vaccine campaign. Their paper, currently under review at a journal, explored three scenarios. The first was an email sent from another student at the school urging the recipient to get vaccinated. The second was an email with audio of coughing, to "make the cost of getting sick more salient," Magenheim told HuffPost. The third was an email offering a $30 incentive.

Offering money was the most effective of the three options, but the most costly as well. One promising result from the peer endorsement email was that students were actually opening that message, so perhaps they were receiving the factual information.

Get The Timing Right

Participation rates would increase if there was less time between a student's plan to get the shot and the opportunity to actually receive it, Bronchetti told HuffPost.

To make it easier for students to act on a good intention, Swarthmore, for instance, has an "open policy" for flu vaccines. Kotarski said that "in addition to formal clinic times," the health service will "offer and give a vaccine whenever a student would like it."

This year, Swarthmore is also holding vaccination clinics in the dining hall "for students who might otherwise not feel they have a moment to get a flu shot," Kotarski said. The vaccine costs $25 but is covered by most insurance policies.

Bring It To The Students

The University of Pennsylvania similarly hosts clinics in central locations on campus. "We bring the flu clinic to students," said Ashlee Halbritter, a health educator with UPenn's Student Health Service.

Last week's clinic, the first of the academic year, had an average turnaround of eight minutes, according to Halbritter and Drinkard. The longest wait for a vaccine was 15 minutes, they said. No appointments were necessary, and students registered using their ID cards. Aside from signing a consent form, everything was done electronically, including paying the $25.

Some 2,500 people were vaccinated at the clinic, including over 1,900 students, according to Halbritter and Drinkard. These are the highest numbers they have seen.

Fact: Flu is more infectious that Ebola. Arm yourself for the season—get your flu vaccine this Wednesday! More info: http://t.co/GKYY5aDpJa

The UPenn health service markets its vaccination clinics vigorously even as they're taking place. "We do as much campaigning [for the clinics] the day of as we do the weeks prior to," Halbritter said.

While UPenn does not allow its offices to email the entire student body, the Student Health Service emails staff and faculty asking them to talk to students. The health service also uses traditional posters as well as Facebook and Twitter posts.

The UPenn officials are encouraged by the number of students who chose to get vaccinated last week. "Anybody who comes on their own accord to a clinic like this is interested in taking good care of themselves and probably also has a good idea of public health," Drinkard said. 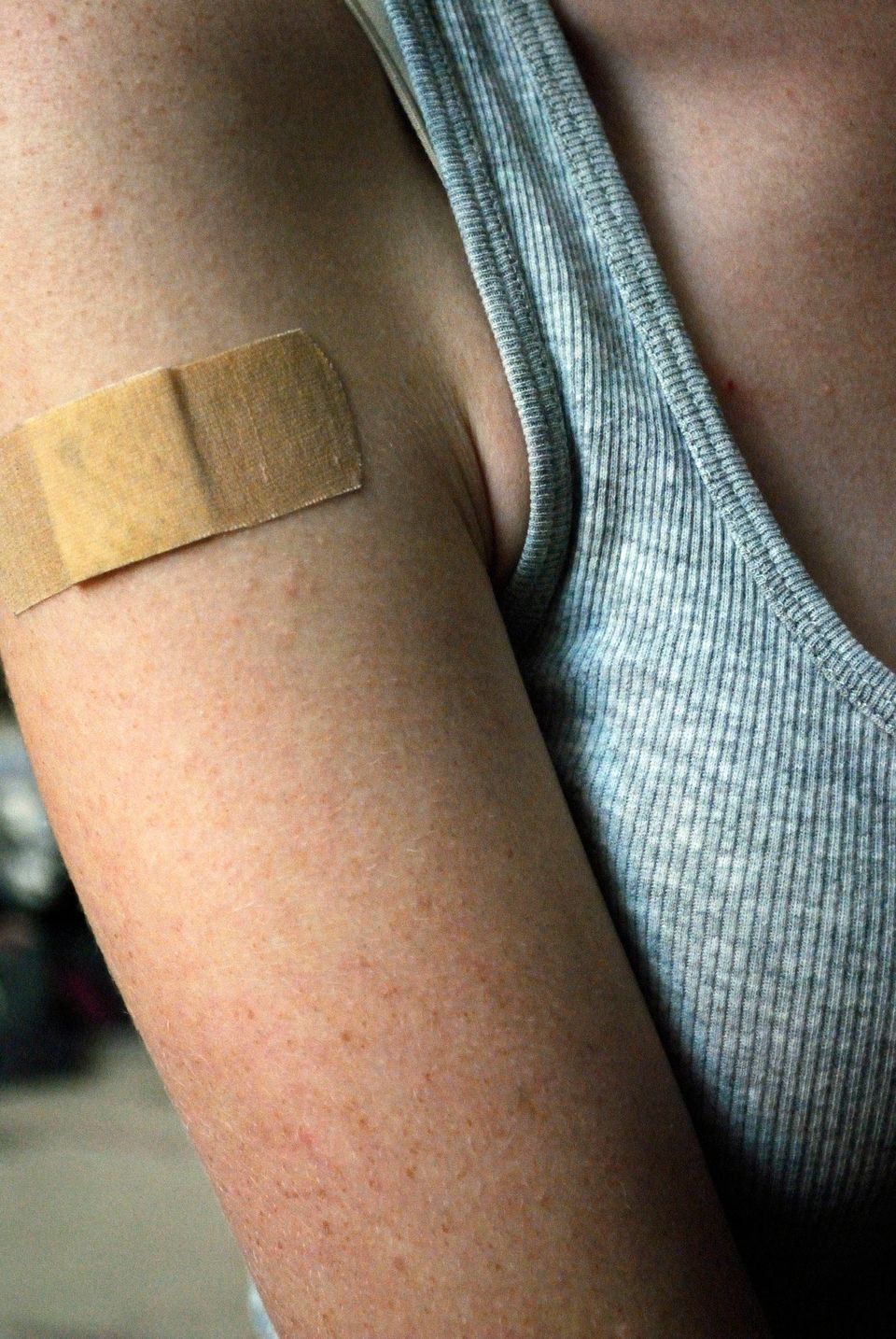 1 / 8
Assuming The Vaccine Is All You Need
While the flu shot is generally considered your best line of defense, it's not <em>guaranteed</em> protection. "The current influenza vaccine is good, but not perfect," says Tosh. Think of the flu shot like a seatbelt, he says. Vaccinating doesn't mean you <em>can't</em> get the flu, but the outcome will likely be better if you do. "It is possible people who have been vaccinated and get influenza will have less severe disease," says Tosh, so there's no excuse to skip the shot. But you should also take other measures to make sure you <a href="https://www.huffpost.com/entry/cold-flu-prevention-natural-immune-boosters_n_2474430">stay healthy this season</a>, like getting adequate sleep, maintaining a regular exercise routine, avoiding touching your eyes, nose and mouth and drinking lots of water.
<a href="http://www.flickr.com">Flickr</a>:<a href="http://www.flickr.com/photos/44321356@N03/4877473380">Vix Walker</a>