WASHINGTON -- This coming Friday, lawyers for Northwestern University football players are set to begin making their case to federal officials that the players have the right to form a labor union. The hearing in Chicago will mark the beginning of a legal battle that could drag on for years. Depending on the outcome, the case could transform big-time college sports and impact labor relations throughout academia.

For union backers, the timing of the move is quite favorable. The road to unionization would be a long one -- it is for most workers in the U.S., since the system is generally tilted to the benefit of the employer -- but there's reason to believe that the players may have a sympathetic audience in the officials who decide their case.

Assuming Northwestern disputes the players' right to unionize -- and that's practically a guarantee -- the legal arguments will hinge on whether or not the players are actually employees of the school and therefore have rights under the National Labor Relations Act. The case will begin at a regional office of the National Labor Relations Board, in Chicago, where the regional director will determine whether or not the players, who are backed by the United Steelworkers union, have the right to hold an election.

Whichever side loses has the right to appeal that determination and almost certainly will. At that point, the five-member NLRB in Washington decides whether or not to grant a review. Due to the national implications at play here, it would in all likelihood take up the case.

As one would imagine, liberal board members at the NLRB issue more worker-friendly decisions than conservative members, who tend to come down on the side of employers in more divisive cases. At the risk of generalizing, liberal members are also likely to have a more expansive view of who should be considered an employee -- and therefore who has rights under the federal labor law.

At the moment, the five-member board has a stable liberal majority appointed by President Barack Obama. That was no simple feat; Republicans had blocked his nominees to the board for years, threatening to effectively shut it down and eventually brokering a fight over filibuster reform. Due to a deal hashed out last year, for the first time in a decade all five members have been nominated and confirmed -- three of them from the president's party, two from across the aisle, per tradition -- and their decisions can no longer be challenged on the grounds that board members are serving illegitimately.

Just because the board leans left at the moment doesn't mean it will rule in the players' favor. But its current disposition makes it more likely than a conservative board to entertain the argument that collegiate scholarships constitute a form of payment and that the players could therefore be considered employees. For what it's worth, many of the board's decisions in the Obama era have infuriated business groups and congressional Republicans.

"I think they have a decent shot," Wilma Liebman, who previously served as board chair under Obama, said of the players. "It's going to be a long, drawn-out and very hard-fought issue, and it probably will get a lot of play. In some ways, the analogous issue is graduate teaching assistants, whether they're students or employees. Both cases turn on similar points that they provide a service to a university in return for some kind of compensation.

"I think it does raise a lot of complex and difficult issues," Liebman added. "There's obviously an evolving view of who is an employee."

Perhaps unsurprisingly, Peter Schaumber, a former board member across the aisle from Liebman, was less inclined to consider that the players might actually be employees.

"I don't put a lot into [the players' argument], because it's not a primarily an economic relationship," said Schaumber, who was nominated to the board by President George W. Bush. "Would that mean that anyone who receives a scholarship is an employee of the university? I think the answer would be no. The reason this is happening, at least with the Steelworkers, is that they're looking for members. Organized labor… is down overall to less than 7 percent in the private sector."

"I would hope even this board would understand they're not employees," he added.

The official who will hear the case in Chicago is Peter S. Ohr, a regional director. Ohr was assigned to his post in 2011 by former NLRB general counsel Lafe Solomon, the Obama appointee who made national news with a complaint he brought against Boeing. Ohr will make the initial decision on whether or not to allow an election to proceed.

In a brief interview Monday, Ohr didn't give any indication as to where he might be leaning in the Northwestern case, saying it was premature to comment. But he did say that he views the case within the context of a growing debate over who and what should be protected by the National Labor Relations Act, a 79-year-old law that now covers an economy quite different from the one it was developed under.

In 1935, it was fairly clear inside the factory who the workers were and who was employing them. The modern economy is far more splintered, and it isn't always obvious who works for whom and what their rights are. For example, as the Wall Street Journal reported Monday, Walmart is arguing before the labor board that the one-day rolling strikes its non-union workers took part in should not be protected under labor law -- and that the firings Walmart managers carried out in the strikes' wake were therefore legal.

Ohr said the Northwestern case shared some similarities with the fast-food worker strikes that have hit cities across the country, insofar as the organizing is happening outside of the traditional structure of organized labor.

"For an act that's been around as long as it has, and that so few seem to know about, its influences are still, I think, relevant," Ohr said. "I find it fascinating."

Even if Ohr determines that an election should proceed, and the board ultimately affirms that decision and orders an election, the players could in theory still lose the vote, keeping NCAA football union free. And even in the event of a victory by the players, the school hasn't exhausted its options. It can simply refuse to bargain with the union. Such a move would kick the case to the federal court system, outside of the NLRB process. And that's how such a case could last years before being resolved.

Ultimately, the implications of the case "could be huge" and move well beyond collegiate football, said Fred Feinstein, a former general counsel of the board during the Clinton years.

"It goes to the fundamental question of who and what an employee is in the modern workplace," Feinstein said. "When it's succeeded, in my opinion, the board has taken the underlying principles [of the Act] and applied it to modern workplace policy. It's not easy to do. You can make an awfully good [argument] that the players are employees and have a work relationship and most importantly would benefit from a relationship where they could negotiate over the conditions of work.

"But is the board willing to go there?" he added. "And how will they get there?" 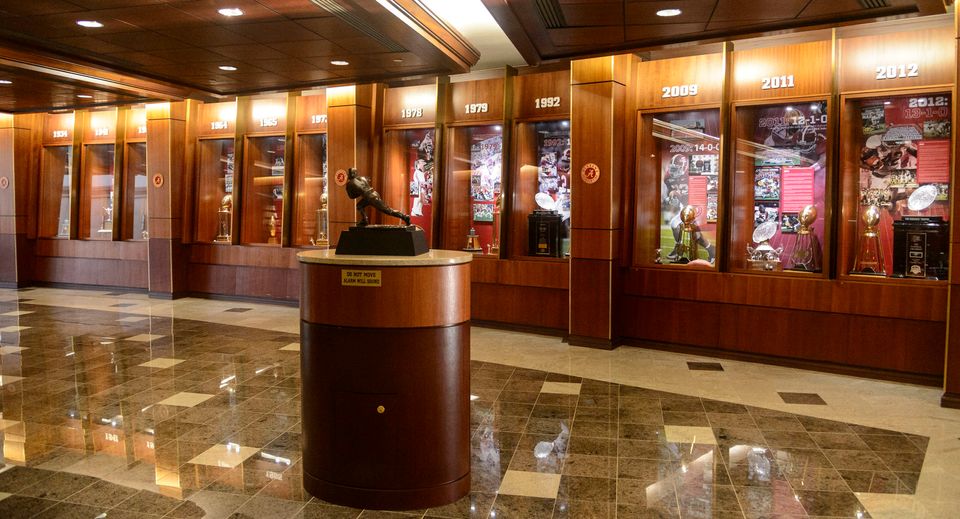 1 / 29
Alabama
In this Aug. 28, 2013 photo, Alabama trophies from numerous championship years are displayed in the Hall of Champions at the Mal Moore Athletic Facility in Tuscaloosa, Ala. (AP Photo/Alabama Media Group, Vasha Hunt)
AP