Leaving college for the "real world" can be a jarring experience for any new graduate. And if a new survey is any indication, a particularly unpleasant surprise awaits the bright-eyed, fresh-faced class of 2015 when they get those first paychecks.

What new graduates expect to earn in their first job is pretty different from what grads of 2014 and 2013 have actually been making, according to a survey released Tuesday by the consulting firm Accenture.

"They believe they've better prepared themselves and that they should command a higher salary," said Katherine LaVelle, a managing director at Accenture Strategy who worked on the study. LaVelle notes that 21 percent of the classes of 2013/14 work part-time either by choice or because those are the jobs they could find. "So I would expect that the average salary for those working full-time is likely higher. It's too early to tell where this class might fall in terms of salary."

And there was a slight uptick in graduates who majored in science, tech, engineering and math -- the so-called STEM fields -- degrees that are known to earn graduates a premium on pay. Twenty-eight percent of the class of 2015 majored in STEM, up from 26 percent for the classes of 2013/2014.

These are young adults who grew up amid the financial crisis and entered college as the recovery kicked into gear. "It makes perfect sense that they did their homework," said LaVelle. 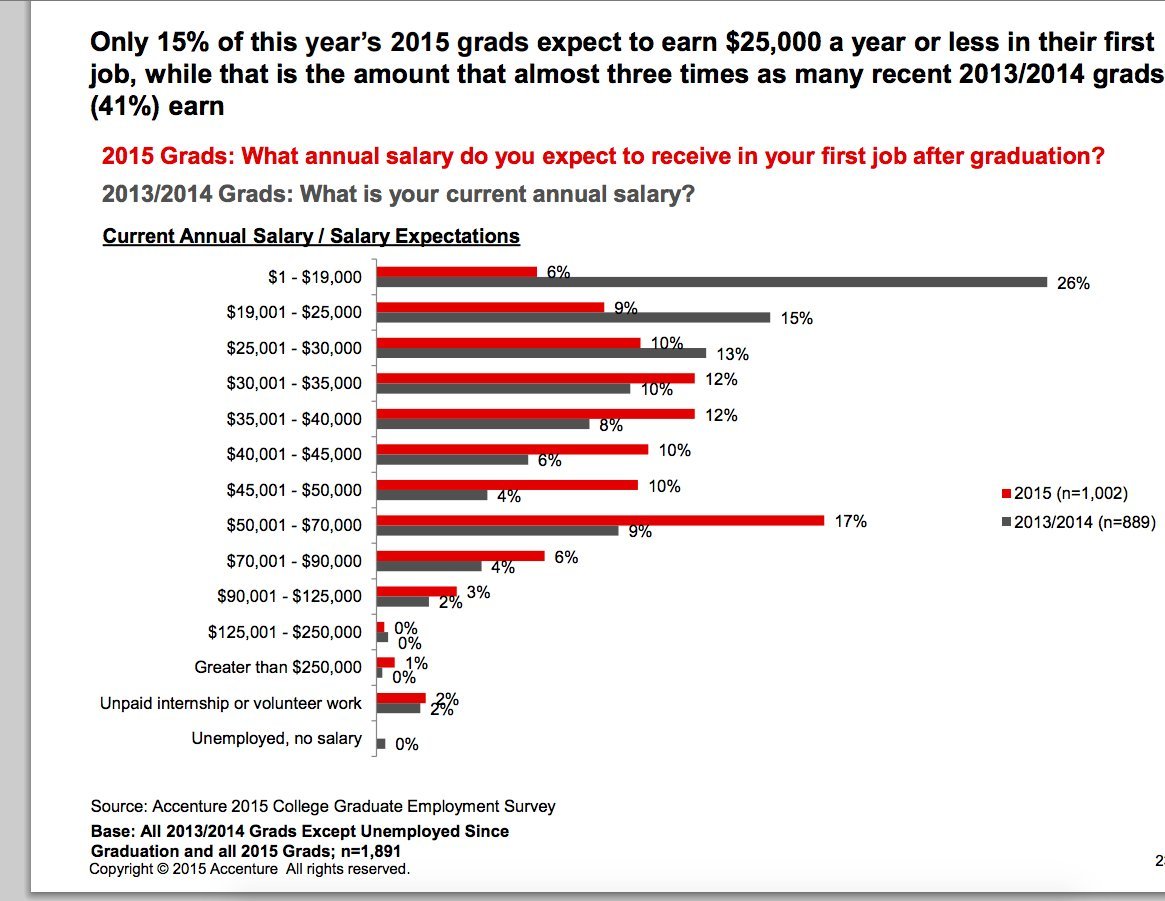 Job prospects for college graduates have been pretty terrible for a long time, said Josh Bivens, research and policy director at the left-leaning Economic Policy Institute. The average young college graduate, between the ages of 21 and 24, makes just under $18/hour, or $36,000 a year, according to new data that EPI is set to release later this month. As an average, that figure is probably skewed a little high, said Bivens.

"There's a reason there's a stereotype of college grads working as baristas in coffee shops," he said.

Indeed, 49 percent of graduates from 2013 and 2014 consider themselves "underemployed," according to Accenture's latest study.

Meanwhile, the class of 2015 has the highest-ever levels of student loan debt, according to data published in the Wall Street Journal last week. The average amount a 2015 grad will have to pay back is $35,000. More than 70 percent of this crop of grads took out loans to pay for school.