Just working up some numbers for testimony next week on education and jobs and wanted to share this graph of real weekly earnings for full-time workers with a bachelor's degree, 25 and up.

I think there's a strain of debate on these issues that argues once someone has a college degree, they're immune from the challenges of today's job market. Then there's a related strain that says there's jobs out there, but only "skilled" workers.

Well, clearly the earnings of these full-time-working adults with BAs haven't been doing so great, falling not just in the recession as you might expect, but over the 2000s expansion as well. And if there's currently excess demand given the supply of college-educated workers, you sure don't see it in these wage data. 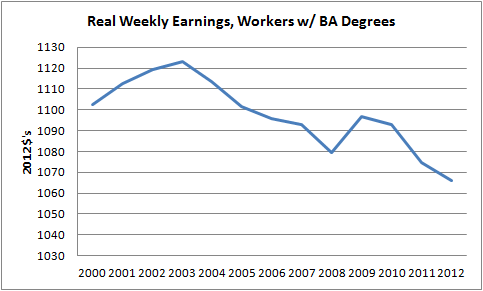 But wait, you say. Shouldn't we be looking at relative wages? Real earnings may be falling for college workers but maybe they're falling less than for those with terminal high-school degrees. (Though, truth be told, the popular rap is decidedly not "go to college and you'll do less badly.")

Using this same data series I found little change in the college/HS wage differential, but EPI does a more refined analysis of the college wage premium, adjusting for age, gender, industry, and other factors. The figure below shows the premium to be flat for women over at least the past decade, and rising a lot more slowly for men than was the case back in the 1980s. 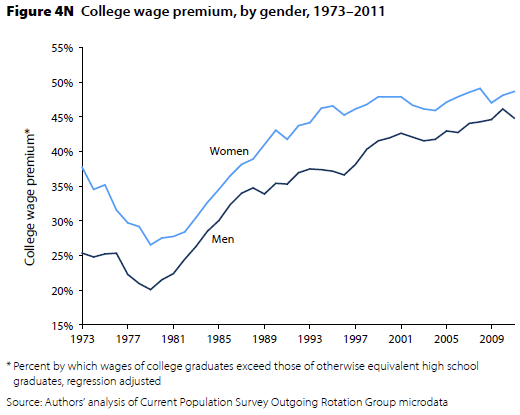 The point is that while college completion certainly gives you a solid leg up, both in terms of jobs and earnings, it doesn't inoculate you against global wage arbitrage, accelerating labor-saving technology, and high unemployment.