Somehow, of all the habits one could pick up while in college -- living on pizza and ramen noodles, sleeping few and odd hours, drowning one's sorrows in the free flow of a keg -- I got hooked on something entirely different: meditation.

During my sophomore year, I serendipitously became involved with a new interfaith project at Georgetown University called the John Main Center. Named after a Benedictine monk who, in the late 1970s, helped to reignite the practice of meditation within the Catholic tradition, the center was established to bring together individuals of various faith traditions to share in the practice of silent meditation.

My only notion of meditation up to that point in my life was essentially the image of an ascetic, bearded Yogi, chanting in a lotus position atop a mountain in India. Could it work for me?

Figuring that college is all about experimentation, I agreed to sign on in 2005 as one of four student directors. In exchange for the sweet deal of living in housing normally reserved for upperclassmen, we agreed to facilitate the twice-daily meditations and periodically plan special events at the center.

The initial response from the Georgetown community was enormous. Students and faculty from all sorts of backgrounds and traditions began to flock to our regular meditations. Many of our early special events, featuring guest speakers ranging from professors to religious leaders to local policymakers, were packed wall-to-wall. 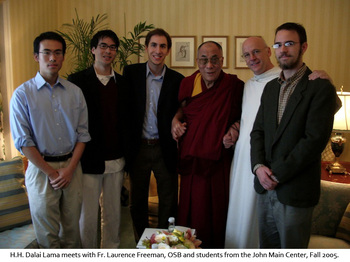 Since its founding, the John Main Center has earned an impressive list of patrons, including His Holiness the 14th Dalai Lama, the Archbishop of Canterbury Dr. Rowan Williams, and President Mary McAlesse of Ireland. The equally impressive board of advisors includes the Founder of the John Main Center and Director of the World Community for Christian Meditation Fr. Laurence Freeman OSB and General Counsel of the International Monetary Fund, Sean Hagan. Many of these influential leaders have passed through the center in the six years since its inception and continue to support its growth.

The model of Georgetown's center is spreading to other universities, where informal meditation groups are being officially recognized and given access to campus space. Many schools are incorporating meditation directly into both wellness and spirituality initiatives, recognizing the low cost and high returns of sponsored contemplative spaces. Meanwhile, initiatives such as the WCCM's Meditatio program are exploring the use of meditation as an experimental tool for peaceful reconciliation of political conflict, for education at the primary and secondary levels, for developing healthier work environments in the business world, and for individuals recovering from addiction and mental disease. 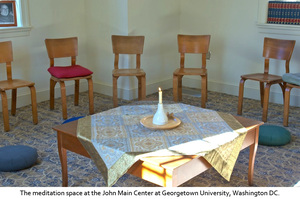 I've met many people who are initially discouraged by the fear of meditation being too difficult or time-consuming. I subscribe to the belief that meditation can take a variety of forms, many of which surprise outsiders and new practitioners. A leisurely stroll through a park? The silent recitation of a mantra (a short, repeated phrase) while mid-air on a transcontinental flight? Focusing intensely on that irregular streak of paint on the ceiling of your apartment? It's all meditation, as far as I'm concerned. I've tried silent meditation, guided meditation, walking meditation, even eating meditation. Stick with whatever suits you best, and try to maintain some degree of regularity if possible. If your campus doesn't already have an organized meditation group, consider starting one.

For me personally, the benefits of meditative practice began to emerge in small doses. As I became more accustomed to rhythm of meditating, the stress caused by coursework and tests became more manageable and less overwhelming. Having a collective space for meditation at the center made it easier to keep to a regular schedule and provided an excellent opportunity to meet meditators from all walks of life.

For many (but not all) meditators, the practice of meditation is a form of deep, contemplative prayer. Catholics with whom I have meditated at the John Main Center will speak at length about their deepened relationship with Christ through meditating. Jewish meditators frequently draw upon mystical conceptions of God derived from Kabbalah and other esoteric traditions as the inspiration for their meditations.

Buddhists, whose modern traditions are far more in touch with contemplative practice than their Judeo-Christian brethren, consider meditation the vehicle to traverse the pathway toward enlightenment. I've even met countless proud atheists who openly embrace meditation for its physiological benefits, which have been expounded upon at length by scientists in the past few decades.

In other words, meditation offers something for nearly everyone.

College can be an overwhelming time of transition, learning, and personal growth. It's also an awesome opportunity to try new things. I strongly suggest you add meditation to your "to-do" list before graduation; it might just be one of those habits that stick with you for life.