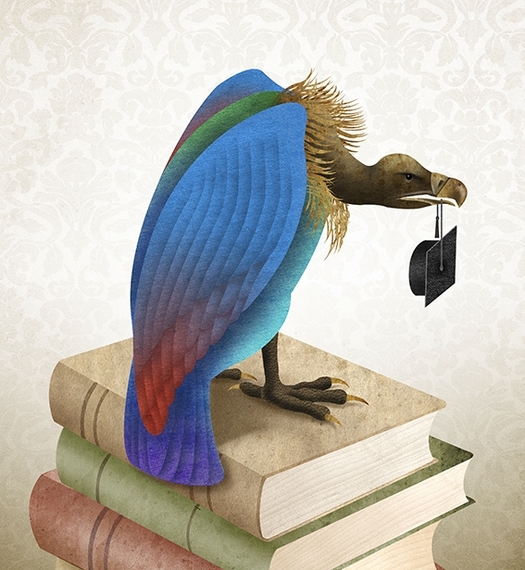 In an article this week, New York Times reporter Patricia Cohen described how Arthur Keiser, the owner of colleges in Florida, is using a nonprofit shell corporation to evade consumer protection laws while drawing millions of federal financial aid dollars. He has been able to get away with it, so far, because the IRS does not have the resources to audit corporations that claim to be charitable nonprofit organizations.

While Keiser exposed his own abuse of nonprofit rules, he does not win the prize for honesty in IRS reporting by fake nonprofit colleges. That claim to fame goes to Carl Barney, owner of several colleges including a data-processing vocational school he patriotically renamed College America (not to be confused with Education America, a different fake nonprofit college).

Barney believes that righteousness is as Carl Barney does. When he was looking for a nonprofit for a leveraged self-buyout of his colleges, he found the "perfect match" in a small free-market think tank. According to its disclosure form, the group promotes "the idea that capitalism is not simply about economics, but rather is fundamentally a moral system in which individuals exercise the unalienable right to pursue their own happiness." The paperwork names Barney as creditor and as holder of all power in the corporation (page 35), a combination that violates basic charity law.

Like some other advocates of education for profit, Barney blasts his detractors as having a "Marxist view of profit." Yet most free-market advocates acknowledge the usefulness of valid nonprofit corporations in the economy. Social impact is aided by formally muting personal financial interest, as Arthur C. Brooks of the conservative (and nonprofit) American Enterprise Institute has explained. At nonprofits, trustees are able to balance what he calls a "double bottom line" - both the educational mission and the organization's finances - without being distracted by a singular focus on a share price or their own income.

To say that education for profit is just about "tax status" - as the industry lobbyists frequently assert - is like saying the distinguishing difference between vodka and water is the calories. The effect on self-control is more important, in both cases.

Federal financial aid makes for-profit colleges more predatory. As an owner, if I enroll 7,500 low-income students--telling them that Uncle Sam is taking care of it, they do not need to think about the price--then I can bring in $100 million from the government. The more I focus on recruiting the poor, the less I need to spend on quality. In 2009 the largest publicly-traded companies brought in nearly $12 billion from the U.S. Department of Education while spending only 23 percent on instruction.

Insiders know it's a problem. The CEO of Kaplan, Inc., admits that he and his fellow executives are constantly tempted to "rev up the recruitment engine" and "reduce investment in educational outcomes" to deliver "a dramatic return on investment." A former University of Phoenix president recently called on for-profit colleges to "stop yielding the future to short-term investor interests." John D. Murphy, the co-founder, laments Phoenix's plunge in quality, calling it "a cautionary tale of what can happen when the financial values of the corporate world are applied to the provision of postsecondary education."

Murphy blames inadequate government oversight of for-profit colleges. Carl Barney and Arthur Keiser, meanwhile, are escaping what meager oversight there is by posing, cynically and dishonestly, as valid nonprofit organizations. There is no reason to wait for an IRS audit: the U.S. Secretary of Education should immediately cut off their access to government financing.

Higher education policy expert in the Obama & Bill Clinton Administrations; senior fellow at at The Century Foundation. Views are my own.