Ever wonder what going to a college party was like a few decades back? Curious about when undergraduate social life became synonymous with keggers and "Animal House"-style frat parties?

After the history of college parties came up in a recent AskAHistorian Reddit thread, HuffPost College took a deeper dive to better understand how the collegiate social scene has changed over the years, from the 1920s through the 1980s.

As you might've guessed, a lot of things have changed. 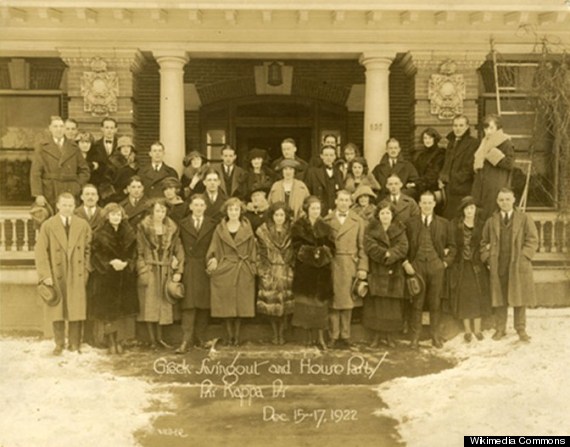 In the 1920s, many colleges were still segregated by gender. Some schools, like American, Cornell, Penn, Iowa, Oberlin and Bates, became or were founded as coeducational in the 19th century. But the Ivy League schools Harvard, Princeton, Yale, Dartmouth and others didn't integrate the sexes until the 1960s or '70s.

College men and women would interact through fraternities and sororities at formal events like dances and dinners, according to The Damned and the Beautiful: American Youth in the 1920s by Paula Fass. Greek life was the hub for dating, and formal student organizations on campus defined the social structure.

This was the Prohibition era, so any drinking took place in private in the fraternity houses or off-campus at speakeasies and jazz clubs.

Any "college party" on campus would have been much more formal, according to Redditor 1Tw03Four, like dinners that included a lot of speeches and other specific rituals.

Female education was on the rise, but it typically focused on preparing women to be wives, and attending college was still not typical for women. As in the previous decade, social life continued to revolve around formal events and dances and joining official student clubs, as colleges attempted to regulate students' free time. There may have been cracks in the social structure, but it appears that this form of campus life remained largely intact. 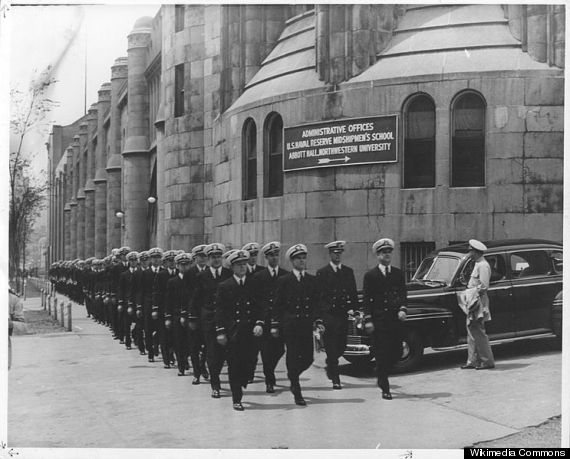 The United States entered World War II in 1941, drawing quite a lot of male students and faculty away from campuses to enlist in the military.

Many campuses mobilized to contribute to the war effort, and portions of some physical campuses and instruction time were given over to the military.

Harvard University president James B. Conant declared in a speech the day after the attack on Pearl Harbor in 1941: "The United States is now at war ... We are here tonight to testify that each one of us stands ready to do his part in insuring that a speedy and complete victory is ours. To this end I pledge all the resources of Harvard University."

The Harvard Crimson, the student newspaper, even ceased production during the war and was replaced by a twice-weekly paper called Service News, which did not include any editorial comment until President Franklin D. Roosevelt's 1945 death.

Many of the students left behind, 1Tw03Four writes on reddit, were still in service, so they would have been in uniform on campus and obeying strict codes of conduct. "A lot of the campus socializing, events, and parties that had been the hallmark of student life in the 20s and 30s disappeared," 1Tw03Four writes. 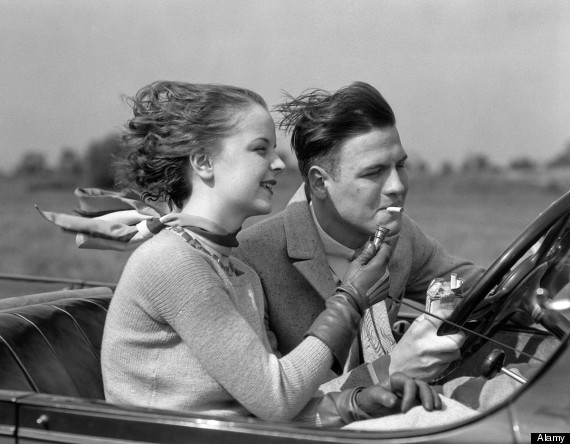 After the war, the G.I. Bill sent a huge wave of returning veterans to college, some of whom enrolled as a way to move on from the war. The proportion of the student body made up of women was suddenly dwarfed by the huge influx of men home from the war, according to statistics from the U.S. Department of Education.

And after winning WWII, these military vets weren't about to let the traditional social dynamics of campus life regulate their activities completely, as 1Tw03Four explains. Returning vets were more likely to drink, curse and have sex than earlier generations of college students.

As for diversity, some states were still segregated under Jim Crow, pushing black students to certain colleges that either catered to African-American students or to schools that were already integrated. The LGBT community remained very much underground, with gay and lesbian students going to secret parties or bars.

Dating life on campus shifted to a focus on finding someone to marry, and advice for women students centered on keeping their husbands happy.

On Reddit, 1Tw03Four writes students were often looking to go steady and ended up socializing off-campus as couples or in groups of couples, creating cracks in universities' control over student behavior.

But it was still a very different scene from today's campuses -- some colleges still had no women professors, and some kept handbooks denoting when women were allowed to date.

A "submerged tension" on campus boiled to the surface, as students declared they were mature enough not to need curfews and chaperone rules, according to Redditor 1Tw03Four. This decade brought the sexual revolution, and students of the opposite sex could finally visit each other in their dorm rooms.

While we can't assume the sexual revolution affected every student in the '60s, photos published by Acclaim magazine suggest students were certainly less prudish than others. Let's not forget that the classic film example of student partying, "Animal House," was set in 1962 and based on experiences the writers had during their fraternity days in the '60s at Dartmouth College and Washington University in St. Louis.

1Tw03Four says: "So this is where the 'college party' in the sense that we think of it today really becomes possible: for the first time, students can go and do what they like, and not face severe disciplinary consequences from their school or from their peers."

Conformity on campus was challenged not only by the sexual revolution, but also because more working-class, minority and female students were matriculating. Student activism increased with participation in the Civil Rights Movement, protests against the Vietnam war and the general growth of the counterculture.

Notable examples of activism on campus included the Berkeley Free Speech movement and the Columbia University occupation (now echoed in the Occupy Cal, Cooper Union and Dartmouth protests of today). At the University of Notre Dame, one residence hall decided to secede from the university in protest of the Vietnam War. 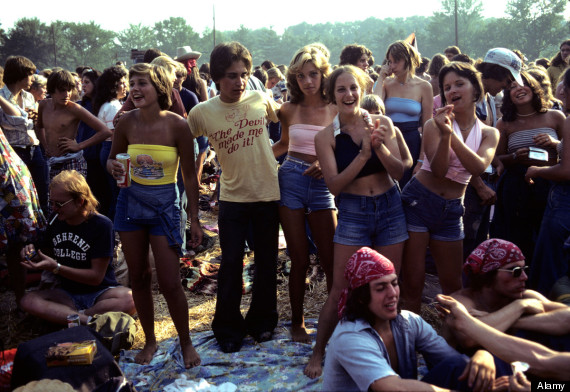 Student activism and the rise of the counterculture continued through the late '60s into the 1970s.

1Tw03Four explains a typical college student might've gone to an anti-war meeting, a rock concert to drink or smoke, or "just go on a double date to the movies."

Yet the Greek system's model of formal parties remained strong. These "Animal House"-style parties continued, as evidenced in photos from business magnate Mark Cuban's Indiana University days posted to Deadspin. One of Cuban's photos shows "rugger bowling": throwing a naked rugby player down a table into a stack of cups.

Some suggest the 1978 release of "Animal House" and the rise of "Saturday Night Live" just encouraged students to imitate the party habits depicted on screen. And more than half of states still had a legal drinking age under 21, so alcohol was much more accessible for students. 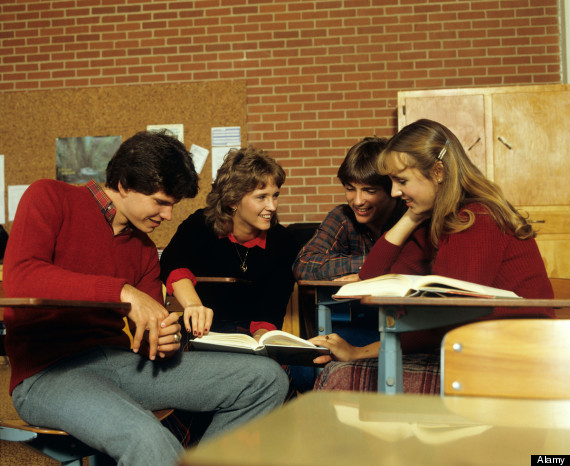 The 1980s were perhaps the last years before the great higher-education arms race, when colleges began to compete to see who could have the campusmost like a country club. Things were cheaper in the 80s -- from books to tuition -- and computers were still rare. Making money was the top reason for going to college, while the biggest student activism movement was the push for divestment from apartheid South Africa.

Women not only matched the number of men on campus in the '80s, they also began to surpass 50 percent of the student body. Another major change, according to 1Tw03Four, was that " more universities [embraced] coed dorms, something that was just starting to get implemented at the end of the 60s." This change in social life meant parties could take place within a single dorm, or even on a single floor, rather than students having to arrange events at a fraternity or off-campus house.

HuffPost readers: We'd love to see pictures of your college partying days, then or now. Hit us up on Twitter @HuffPostCollege or email college@huffingtonpost.com.