Sierra Castedo-Rodgers got sober in 2012, when she was a 25-year-old graduate student at the University of Texas at Austin. After that, she abandoned her plans for a Ph.D. to pursue a more fulfilling goal: leading an on-campus program to help other former alcohol and drug addicts like her.

"By the time you acknowledge you have an addiction, that shit's not fun -- pardon my language, but that's not fun," said Castedo-Rodgers, who is now the director of UT Austin's Center for Students in Recovery. "You cease to have fun when you drink or take drugs. It's compulsive, and a really confining experience."

She now helps facilitate events, including meetings, sober tailgating and service projects, for approximately 100 participating students. Every week, they gather on campus for group meetings, meditation and yoga sessions. On the weekend, some of them may hit up the clubs downtown while remaining sober.

UT Austin has invested over the past decade in expanding services for students in recovery as part of a growing movement on college campuses nationwide. When UT Austin began its Center for Students For Recovery, or CSR, in 2004, there were only four similar college programs in the U.S., according to Castedo-Rodgers. Today, there are at least 135.

This increase reflects a growing commitment among colleges to help former addicts stay sober, recovery advocates say. And the results are promising. Universities with recovery programs are seeing increased retention rates, eroding stereotypes about party schools and even attracting students who say these programs are specifically what appealed to them. In a larger sense, schools like UT Austin are getting in on the ground floor of a movement that could one day become the norm on campus the way counseling centers are today.

The programs aren't designed to get students sober -- there are other treatment options for that. Rather, these programs are geared toward students who have sought and received treatment, and who may now need help staying sober, focusing on their studies and finding the social support they need to thrive in college and beyond. They provide a support group for addicts dealing with the unique pressures of student life that other, more generalized 12-step programs aren't necessarily set up to address. 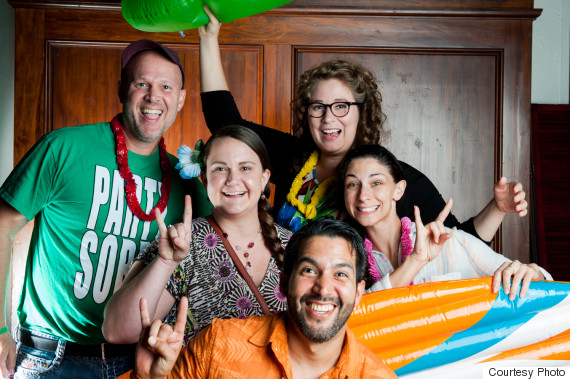 Sierra Castedo-Rodgers (back right) poses with students involved with UT Austin's Center for Students in Recovery.

For Chris Brownson, director of the Counseling and Mental Health Center at UT Austin, which hosts the recovery program, the increasing popularity of these centers is no mystery. "I think this is popping up everywhere because people are just seeing what a good idea it is and what a difference it's making on campuses," he told The Huffington Post.

No state has embraced the on-campus recovery movement more than Texas. In 2012, the University of Texas system invested close to $1 million to expand UT Austin's program to every one of its nine campuses, becoming the first higher education system to do so. It's having a ripple effect, too. Students enrolled at three local schools -- Texas State University, Austin Community College and St. Edward's University -- can take part in the UT Austin program alongside Longhorn undergrads.

Other schools in the state, including Texas Christian University, have started their own versions of recovery programs without going so far as to establish a full center on campus. And some participating students hope to set up shop at other schools once they earn their degrees.

"The students in our recovery group, they feel they have found their fit, which I guess means we're doing something right," said Caroline Albritton, program specialist at TCU's Alcohol & Drug Education program.

Some campuses set aside office space for the programs, while at other schools, participants just book a room for their meetings and events. The students often plan occasions where they can hang out with others who are former addicts, removing any temptation to relapse and creating an environment where everyone understands the challenges of balancing sobriety and academics.

Some students and staff have also found the recovery programs to serve as a fraternity network of sorts. While TCU in Fort Worth doesn't have an actual recovery center, its 3-year-old program has provided a connection with students in recovery at Southern Methodist University in Dallas. When a recovery student at TCU had an internship in Dallas, for example, the student had a group of other college students to get in contact with, Albritton said.

In many cases, former addicts are leading this movement. They say the challenge is less about showing sober students they can still have fun, and more about providing a community of support for people who have already made the transition to a life without drugs or alcohol. That's why a top priority for each program is simply to organize opportunities where former addicts can connect and speak openly.

UT Austin's program started with help from staff at Texas Tech University, which introduced the country's second collegiate recovery program in 1986. (Rutgers University had the first in 1983.) Kitty Harris, then-director of the Texas Tech Center for the Study of Addiction and Recovery, helped UT officials write their first grant for funding. Since then, especially in the past five years, the programs have "caught on like wildfire" in higher ed, according to Harris.

"I think one reason is, there's such a need," said Harris, who's now an Integrated Scholar at Texas Tech. "And maybe more importantly, they're so incredibly successful." 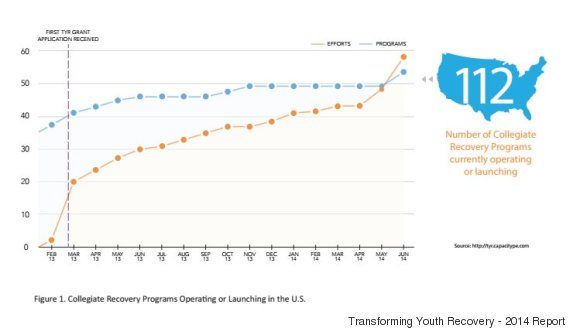 A chart from a 2014 report by Transforming Youth Recovery shows the rapid growth in the number of on-campus programs in the past few years.

Steve Hicks, who had his own struggle with alcohol in the past, and a current member of the UT Board of Regents, which governs the system's universities, pushed to expand the recovery program to all nine campuses.

"A few of the [university] presidents said, 'I don't think we have a problem with addiction on our campus,' and that's just them not looking," said Hicks, adding that around 10 percent of people in any population center have substance abuse problems. The actual number of addicts in the U.S. is hard to track, but at one point in 2013, the Centers for Disease Control and Prevention estimated that nearly 10 percent of Americans over the age of 12 had engaged in illicit drug use in the past month.

While Hicks may have had to nudge his fellow regents and UT administrators in the right direction, he said the programs have not only helped students but served as a valuable recruiting tool, even wooing transfer students from other big universities that lack addiction treatment programs.

Reggie Smith is a 49-year-old student majoring in social work at UT Austin. Someone he worked with in San Antonio gave him the number of Ivanna Grahovac, then-director of the UT Austin CSR, when he was finishing community college in 2014.

"Once I talked to her, she was very open and receptive to my needs," Smith said. "She invited me down and found someone to mentor me who was already in the program. [She] tried to match me up with someone who was closer to my age group and could show me around the university."

Smith, who's been sober for nine years and is studying to become a licensed chemical dependency therapist, says the UT Austin CSR has become his "base camp" at the university. He typically spends his free time there and meets with a tutor once a week at the CSR office space.

"I thought I would be shunned -- no. I was actually embraced," Smith said. "I've always been upfront and straightforward with my past, but everyone's only embraced me. The School of Social Work embraced me. You might think I was making this up or something, it sounds so good, but this is really like a family to me. It has truly helped me to not only succeed here at UT, but to thrive."

What do you think? Finish this sentence in your own words.Recovery is...

Posted by Association of Recovery in Higher Education on Thursday, February 12, 2015

Expenses vary from school to school, but it typically costs around $200,000 to launch a recovery program at a state university, according to Grahovac, who is now the executive director of Transforming Youth Recovery, a nonprofit charity arm of the Stacie Mathewson Foundation, which provides grants to colleges to launch recovery programs on campus. Much of that upfront cost is associated with providing a space that, in Grahovac's words, needs to serve as an "oasis" for the recovering students. A fledgling program will also need to hire someone devoted to the program’s success. However, the goal is usually for a CSR to become self-sustaining through fundraising, like at UT Austin.

Many universities are initially reluctant to admit that their students struggle with substance abuse, Grahovac said. However, schools are increasingly seeing recovery programs as a means to "counterbalance that party reputation," she said.

"For many colleges, it's a way to help [students in recovery] stay in school," said Harris. "It helps their retention rate."

And for the students themselves, these programs have become a critical component of a fulfilling college experience.

Stephenie Nunn, now 32 and a social work grad student at UT, said she'd felt isolated as a recovering addict when she was earning her bachelor's degree at the University of North Texas without a support system on campus. She attended non-UT 12-step meetings, but what she really needed was a support network that understood the unique pressures of being a student.

"You go to the 12-step meeting and they don't understand what it's like to have to write a paper or study for a test," Nunn said. But at UT Austin's CSR, they get it.

Nunn said she started using cocaine at age 15 and meth at 17. She dropped out of high school and was given a court order to get her GED certificate. It wasn't until 2006, when she got sober at the age of 24, that Nunn started thinking about going to college.

"Recovery has enabled me to go to UT," said Nunn, who recently earned her master's degree. "Without recovery, I would never be where I am today."

CORRECTION: A previous version of this article said students from St. Thomas University were able to participate in UT-Austin's program, when it was supposed to be St. Edward's University.