In the tsunami of data about higher education that the Obama administration unleashed on an unsuspecting nation late last Friday, one fact emerges that was already painfully clear: the "haves" in higher education have quite a lot; the "have nots" struggle mightily. And this economic chasm is seriously influenced by gender, race and social class -- issues on which the College Scorecard is silent, but which affect just about every factoid presented. The silence of the administration on the impact of discrimination on collegiate data piles more sandbags on those institutions working the hardest to help disadvantaged students find some equilibrium on the playing field -- schools that serve large numbers of low income students, students of color, mostly women whose struggles with pay equity are legendary.

The administration wonks worked feverishly to exorcise their obsession with the notion that more data will be more "transparent" and, hence, ensure better college choices among students and families. The reality is that even smart wonks educated at some of the best of the "haves" can be blind to social reality; their monument to algorithmic gymnastics in the College Scorecard obscures some of the most important and painful facts about college life and American society today.

Start with the data set that is really new in the White House College Scorecard (which has existed for quite some time): the data pulled from IRS records about the earnings of student loan borrowers 10 years after they first enrolled. While we all might wonder whether taxpayers really understood that their tax records would be used in this new and curious way to create some kind of correlation to educational quality in college -- data privacy and consent being somewhat elusive concepts for the federal government except when enforcing rules for colleges -- the information is now in the public arena and so merits examination.

We can argue about proportionality in using earnings data to assess the quality and effectiveness of a college or university; a nation preoccupied by materiality and driven by acquisitiveness exalts bankrolls over justice, we know this already. Love it or hate it, the reality is that the earnings data is now in play thanks to the Obama administration. Thanks, Obama!

The administration presents the collegiate earnings data as if it were value-neutral, not only with no reference to the mission of institutions that may have different values from those the administration apparently exalts, but even more devastatingly, with no reference to the pernicious effects of gender and race discrimination on career opportunities and earnings. In fact, the data is an illustration of America's continuing shame when it comes to the still-unequal playing fields of career opportunities and earning power. While women and people of color who have attended and graduated from college fare better than their counterparts who have not gone to college, the pay equity and career opportunity gaps remain quite stark. The rich get richer, and the rich tend to be predominantly white and male; low income students, students of color and many women progress more slowly and with fewer avenues for significant progress, the figleaf of "undermatching" initiatives notwithstanding.

To illustrate the pernicious effect of earnings data presented as simply a value-neutral indicator of something about academic quality -- which is it not -- consider this chart (I am not a wonk, but I did prepare this chart based on data in the College Scorecard and the federal data system IPEDS): 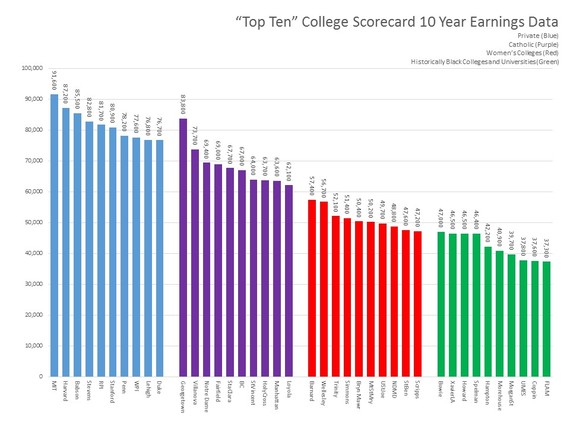 This chart presents the "top ten" schools by average earnings found on the Scorecard in each of four categories (I chose these based on likely comparisons for my own university, Trinity in Washington): private nonprofit universities (blue), Catholic colleges and universities (purple), women's colleges (red), and Historically Black Colleges and Universities (green). The chart is arrayed in that order which is the order of earning power of the top ten in each category from most to least. Knowing national pay equity data, can anyone be surprised by this clear illustration of the unequal playing field?

Many flaws arise in considering the earnings data. The data purports to represent average earnings ten years after the first enrollment for student loan borrowers. For many students of all backgrounds, those first ten years after first enrollment may well be full of life events that can repress or alter earning power significantly -- if not delayed completion in graduate school, then first and second jobs, marriages, children and families, parent care. Many women, in particular, find it necessary to stop out of the job market for a period of time, or to reduce work hours, in order to have children and care for families. The value-neutral approach to the collegiate earnings data ignores the facts of life about women and families.

Moreover, in other data released almost at the same time as the College Scorecard, the National Center for Education Statistics provides an updated report on "non-traditional" students in higher education. As this report has illustrated for years, and reinforced in the latest data, 74% of all undergraduates have at least one "non-traditional" characteristic, and more than 55% have two or more non-traditional characteristics such as having children, being a caregiver, delaying college enrollment, attending part-time, working full-time. These characteristics affect every single data point on the College Scorecard, including graduation rates (non-traditional students move through college on non-traditional pathways, but the Scorecard uses the scurrilous IPEDS graduation rate as the norm) and loan repayment rates (which, in fact, reflect the deferment of loans while still in school or the income contingent repayment plans which the Department of Education has encouraged). The more such characteristics that are present in a student body, the more likely it is that the data will be different from what the administration has deemed to be the "norm" whatever that may be.

But the College Scorecard completely ignores the increasingly non-traditional nature of the nation's undergraduate student body today, and instead, presents data as if most college students are privileged children whiling away four years in some grove of academic luxury. To the extent that there are still some of those kinds of students in college, they are more likely to be children of privilege, predominantly white and economically secure, able to attend college full-time with parents paying the bills -- and, quite possibly, with lucrative jobs awaiting thanks to the old boys' network of their families and the schools and colleges they have been so fortunate to attend.

The Obama administration claims that the new College Scorecard will provide more "transparent" data to students and families trying to decide which college to attend. Unfortunately, by presenting some data in value-neutral or misleading ways, and ignoring other truly important questions in the college choice process -- What are the student's abilities? Where will she get the best academic advising and support services? Where will he have the continuous engagement of real faculty? What is the campus climate for women, or students with disabilities, or students with children, or poets or engineers or, yes, true scholar-athletes? What is the mission of the college? Will the student be able to thrive spiritually as well as academically? -- the administration presents a data mashup with limited utility for consumers but large potential for misrepresentation of social realities.