As many as one in four women experience sexual assault at college, though the vast majority never report it, according to a study of students at nine schools released Wednesday by the Bureau of Justice Statistics.

An average of 21 percent of female undergraduates at the unnamed colleges and universities told researchers they had been sexually assaulted since starting their higher education. One in four female seniors reported being sexually assaulted in their undergraduate years, with the rate ranging from a high of one in two at some of the schools that were studied to a low of one in eight.

The prevalence of campus sexual assault found by the federally funded study, while shocking, is similar to the results of earlier research. The new study also shows sexual violence varies considerably at different schools, said Christopher Krebs, a research scientist who was the report's lead author.

"We don't think a single statistic is of interest to universities trying to combat this problem," Krebs said. Instead, he explained, researchers tried to provide ranges of what students had experienced at the nine schools studied.

In the 2014-15 academic year, an average of 4.2 percent of female undergraduates said they had been raped, with the rate at some schools as high as 8 percent, according to the study. During the same year, an average of 10.3 percent reported being sexually assaulted.

"This is a major advance in the research about sexual assault on campus," said John Foubert, a researcher at Oklahoma State University. "Overall, the study is well done and we have many reasons to trust the results. The use of stratified random samples is excellent; it enhances validity highly and gives further confidence that this is a good study."

One questions what it is going to take to convince people that rape on campuses is serious when the siren has been on for 25 years Mary Koss, University of Arizona Public Health Professor

The Justice Department's Office on Violence Against Women provided funding for the research through the Bureau of Justice Statistics following a White House task force on campus rape. The bureau hired RTI International, a nonprofit research organization that had previously studied college sexual assault.

Krebs' team selected the nine schools by size, status as a public or private school, and region. Researchers cautioned that the data is not intended to be nationally representative of all college students or institutions of higher education. Instead, the results are best compared with other campus or national surveys.

Earlier research found similar rates of sexual assault in college, including seminal studies by Mary Koss in the 1980s, a previous BJS-funded paper in 2000, and surveys of college students by The Washington Post and the Association of American Universities.

While some pundits have criticized the validity of the one in five sexual assault statistic, the results in previous surveys have been consistent over time. The National Crime Victimization Survey, which shows much lower rates of sexual violence among students, has been widely criticized by researchers for undercounting actual incidents of rape and assault.

"One questions what it is going to take to convince people that rape on campuses is serious when the siren has been on for 25 years," said Koss, now a public health professor at the University of Arizona. "However, the numbers suggest that the alarm is louder today."

Foubert, of Oklahoma State, said the survey leaves him with questions about the schools that were outliers in sexual assault rates. He said he would be curious to study whether aspects of their campus life contribute to higher or lower rates. 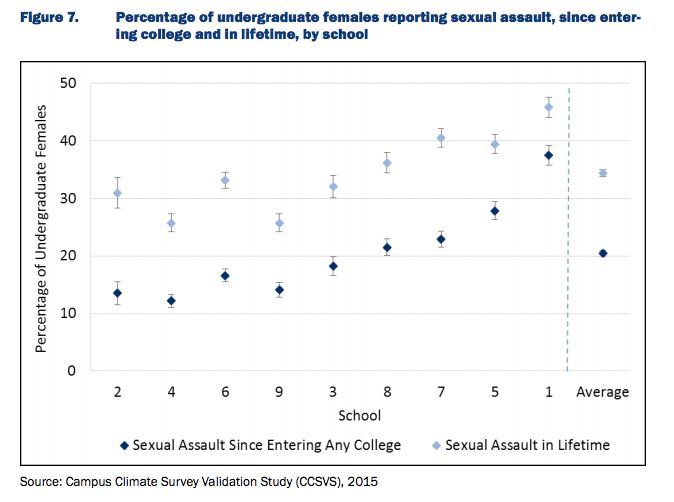