SAVANNAH, Ga. (AP) — A 22-year-old college student found dead in restraints at a Georgia county jail died from several blunt-force injuries to his head and upper body, the coroner who ruled the death a homicide said Thursday.

Investigators for months have refused to say how Matthew Ajibade died, citing an open criminal inquiry. His body was found on New Year's Day strapped in a restraining chair inside an isolation cell at the Chatham County jail.

Chatham County Sheriff Al St. Lawrence last month fired nine deputies in connection with the death, and District Attorney Meg Heap has said she plans to seek an indictment from a grand jury.

Attorneys for Ajibade's parents in Hyattsville, Maryland, said they learned Thursday that his death had been ruled a homicide caused by blunt-force trauma from information on the death certificate. The attorneys shared a copy with The Associated Press.

Wessinger said he based his conclusions on the results of an autopsy by the Georgia Bureau of Investigation, which has declined to make its report public. The law defines homicide simply as a death caused by another person, but it's a neutral term that doesn't mean a crime was committed.

Ajibade suffered "about five injuries that were described in their report," Wessinger said. "There were abrasions around the head and a little bit of blood inside the skull case."

In addition to the head wounds, Ajibade suffered injuries to his upper body, the coroner said.

"My recollection is none of them by themselves would have necessarily been fatal," he said.

Ajibade's death certificate is dated May 8. Neither his parents nor their attorneys knew the document had been filed, or what it said about Ajibade's death, until a photograph of it showed up on social media, said Florida attorney Mark O'Mara, who represents the family. 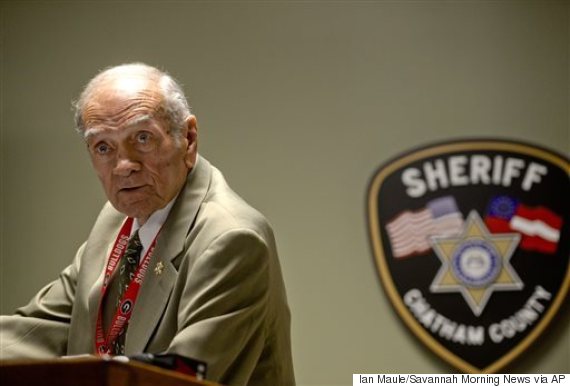 O'Mara said he didn't know how the death certificate got online and authorities never told the family it had been filed. Under Georgia law, copies of death certificates can be obtained by relatives and their attorneys, but not by the general public.

"It's really disgusting to me," O'Mara said. "They owe anybody the common decency of letting them know first how their son died."

A student at the Savannah College of Art and Design, Ajibade was arrested on domestic violence charges Jan. 1 after a fight with his girlfriend. Sheriff's officials have previously said Ajibade became violent and injured three deputies as he was being booked at the jail. One deputy suffered a concussion and a broken nose, according to the sheriff's office. Ajibade was place in isolation in a restraining chair, where he was later found dead.

Attorneys for Ajibade's family say he suffered from bipolar disorder and his girlfriend gave police a bottle of his prescription medication when they arrested him.

O'Mara said he suspects Ajibade was having a manic episode at the jail.