College students are talking about abusing Adderall on Twitter a lot, according to a recent study monitoring discussion of the pharmaceutical drug online.

Researchers collected tweets by monitoring a keyword rather than soliciting volunteers because it eliminated the Hawthorne Effect, "where the presence of the researchers biases the response," and also allowed them to track geographical locations of the users. They gathered all Twitter posts mentioning "Adderall" between Nov. 29, 2011 and May 31, 2012, resulting in a collection of 213,633 tweets from 132,099 unique user accounts.

The vast majority of tweets discussed Adderall in "a joking, sarcastic, or casual manner," the study concluded. But they did find that a number of students disclosed the side effects of sleep deprivation and loss of appetite.

Not surprisingly, students tend to tweet more about Adderall during weeks around final exams. Adderall discussion was more common in the middle of the week, and dropped significantly on Friday and Saturday.

Adderall is a drug prescribed for the treatment of Attention Deficit Hyperactivity Disorder, but is the most commonly abused prescription medicine among college students as a "study drug." The group of researchers from BYU wanted to examine how users discuss the drug in a public forum like Twitter because of the potential it can cause more students to abuse Adderall:

Because social media is, by its very nature, a social endeavor, the users’ postings can have a great impact on the social norms of others. This is particularly relevant in the context of drug abuse, where drug abuse behavior can be represented. Social norms theory suggests that individual behavior (eg, drug use) is influenced by individual perceptions of what is perceived as “normal” or “typical.”

Rates of Adderall tweets by 150 mile college clusters in the United States (rate per 100,000 students): 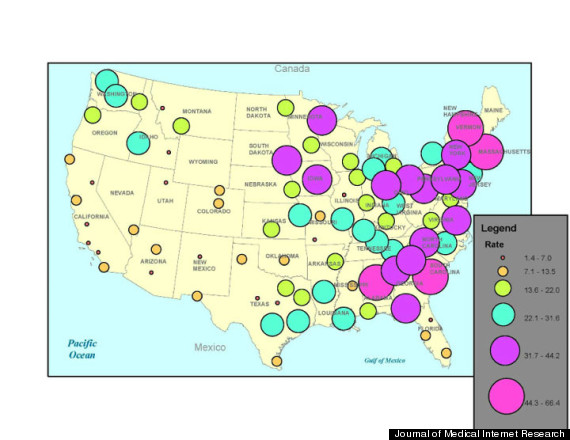 The study notes Adderall abuse tends to be higher at universities where admission standards are higher, suggesting students at more selective colleges are more likely to take the drug.

"Given the risks and trends for Adderall acceptance among college-age students," the study's authors wrote, "there is a need to renew interest and priorities to influence college campus norms, promote the safe and legal use of these substances, and promote stronger student wellbeing and study habits to better manage the academic demands and pressures that are typical on college campuses in the United States."

The study, titled "Tweaking and tweeting: exploring Twitter for nonmedical use of a psychostimulant drug (Adderall) among college students," was published by the Journal of Medical Internet Research in April.