Students gather in Columbus, Ohio Aug. 10-14 to bring together student organizers and leaders from youth movements in North America, focusing on building stronger local movements, recognizing the unifying factors between movements, and catalyzing an overarching national student movement for justice and equality in the United States. 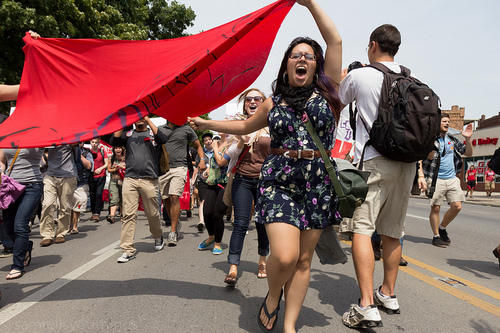 Upwards of 70 youth organizers and leaders from the National Student Power Convergence marched in the streets from the Ohio State Student Union to the Obama for America at Ohio State campaign office in the South Campus Gateway on Aug. 13 to hold a press conference marked by a balancing act between breaking and playing by the rules.

The statements primarily called into question the injustices of the current economic and political system. The students delivered their grievances on a range of unsolved societal inequities that politicians, according to the convergence press release, have "failed our youth" by not confronting: racial, gender, and LGBTQ inequity, corporate-money's negative influence on political decision-making, and environmental degradation.

Several pre-selected youth speakers stood within the circle of the crowd delivering statements on issues of education, tuition increase, poverty, hate crimes, and destruction of natural resources that they feel are not adequately addressed or prioritized by 21st century politicians.

"We can preach economic growth all day long, but there are no jobs on a dead planet," said Tabitha Skervin of Michigan State University. 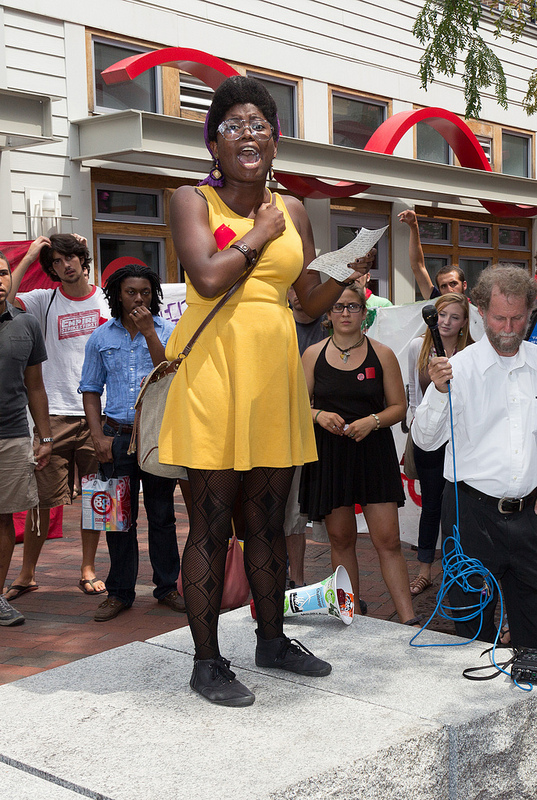 Despite the serious undertones (fighting for a future), the students embraced the spirit of activism and movement-building by issuing encouraging cheers to the youth speakers and by performing chants inciting unity, getting the student voice heard, and being in charge of their future.

The National Student Power Convergence issued a statement that democracy cannot exist without demonstration and debate in public spaces and that students must "join the rallying cry of student movements across the world" and resist "a system that does not serve the majority of us."

The crowd then marched up the sidewalk of North High Street, on the Ohio State campus, and into the neighborhood north of campus to convene for strategic organizing sessions and trainings.

The balance of strategy and the combustion of youthful energy of the convergence became clear as the debate to re-take the streets was poised before leaving the Gateway outdoor square. A male youth organizer stood up to challenge the take-the-streets-now approach,

"What best serves this revolution? Us getting arrested today for a minor infraction or us networking and learning from each other and building a movement?"

A female youth organizer brought up the importance of communal discussion,

"I want to go back to the awesome discussions we had last night about purpose, targets, and what we expect to get from something. I feel like everyone feels good about what just happened, there is nothing to gain from going back in the streets, we don't have legal observers...and there are a lot of people who can't risk arrest, so it's just not fair." 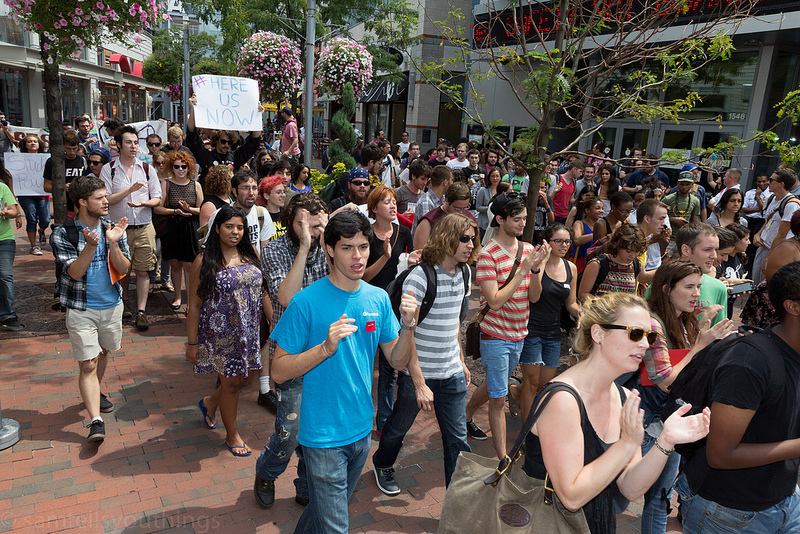 The crowd of students largely stuck to the sidewalk upon return; however some students led an individual action into the streets followed closely by police cars issuing warning sirens. This could give wind to a spirit of a youth movement unafraid to take the streets, but decidedly cognizant of the time, place, and purpose of that action as well as priding themselves on being considerate of the comfort-level of their fellows.

The degree to which this hyper-considerate unity stays true at the national and local student movement level, as well as the degree of strategic vs. spontaneous protest, will be significant in lieu of the charged energy of the upcoming presidential elections and in the longevity of a national student power agenda.

Another student participant noted a need for more coverage of LGBTQ and people of color (POC) issues, perhaps the remaining hours of the convergence will address this.

For more information on the origins, involved organizations, and inspiration for the Student Power Convergence see this Campus Progress article.