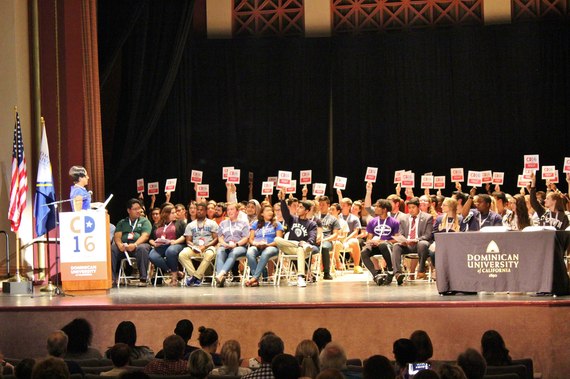 As a news junkie, political science researcher, and campaign staffer, I have gone to dozens of political events this past year. I heard candidates questioned by locals and press at town halls and forums and often my own hand was in the air, hoping to delve into topics from education reform to tax policy. Earlier this month, I spent 24 hours with more than 100 other college students from across the country coming up with questions for the premiere stage in American politics: the presidential debates.

College Debate 16, organized by Dominican University of California, is working to focus on the issues that millennials care most about. Students representing every state discussed the questions America's biggest voting block, our generation, wants answered--and that was a responsibility we all felt. The final questions we agreed upon were sent to the Commission on Presidential Debates, the official organizers of the events, as well as the moderators of all four debates.

Convening from all over, the schools we represented were big and small, public and private, from Arizona State University to my own, Middlebury College. We were a diverse group of students--geographically, racially, and politically. Although the majority of us were Democrats or liberals, there was still a strong showing of Trump supporters, including many who had supported others in the GOP primary.

With peers from every state, I found myself in political conversations unlike any I've had in my life. We were not discussing policy, or even overarching ideologies, rather just what we considered the most important issues that should be featured on the debate stage.

In an old, wood-paneled lecture hall, we started with a list of Facebook's most discussed issues. We whittled these down to five that we would compose questions for. They were the economy, education, foreign affairs, immigration, and social justice.

Of those that were cut, income inequality was the first to go. It was deemed least important by the majority of students, although it was later brought back under the umbrella of the economy. While Bernie's presidential campaign was powered by the youth vote, it was clear that not every young person agreed with him. Civil rights, although not voted out first, was brought under social justice. To the surprise (and disdain) of many, the environment and health care were also voted off.

With many strong opinions on immigration, it was the issue that the group least wanted to remove. Some students were passionate about cracking down on undocumented immigration, or their disgust with the Republican candidate's demagoguery. Others, who were the children of immigrants or immigrants themselves, thought of the issue personally. 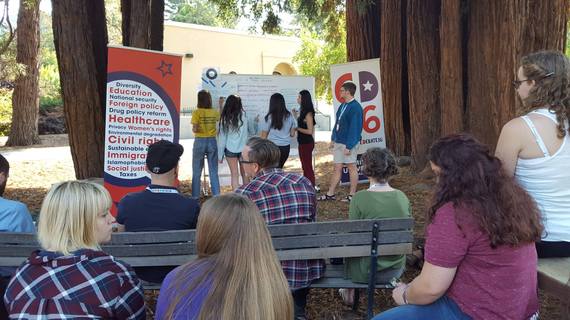 The next morning, we really dug into topics. We discussed the most important aspects and policies under the chosen issues, and how they related to our generation. Yet, each student viewed those relationships differently. Many felt a responsibility to discuss their connections to issues.

For example, when it came to foreign affairs, some were concerned about U.S. military action. As young adults, we would be the ones to go off to war. Others were concerned about international action on climate change, a crisis that millennials will continue to deal with for decades.

Often, people were split on the approach we should have to a topic, some wanted to ask the questions that were essential for college students. Others hoped to focus on the discussion the topics that are not as vital to millennials, but would not otherwise be in the discussion. Perhaps our discussion on education showcased this best. Central to every discussion on education was equality of public schools, and access to higher education. However, nearly as important to many of us was a discussion by the candidates on youth civic education and engagement to create active and informed citizens. We felt that while education access would be in a debate regardless of what we put forth, civic education would not without our raising of the issue.

At the end of day two, we voted on our final questions, narrowing it from three per topic down to one. Below are the questions that were submitted to the moderators.

Economy: How would you restructure government assistance programs for the unemployed or impoverished to obtain self-sufficiency?

Foreign Policy:
1: What specific circumstances would prompt the United States to use military resources in a foreign country, and how would you utilize the nation's military resources?
2: How do you plan to support Syrian civilians without creating further conflict with other political actors?

Social Justice: What will you do to reduce the recidivism and mass incarceration rates in communities where poverty and violence are prevalent?

Immigration: What is your plan for aiding the employment of skilled refugees and immigrants in their respective fields?

Education: How will you ensure quality education in socio economic disadvantaged areas both in terms of K-12 and access to higher education?

As I look forward to next Monday and the upcoming debates, I hope that the moderators ask the essential questions that college students have on their minds.