As an undergraduate at the University of California–Irvine, Christopher Campbell was almost forced to drop out by repeated double-digit increases in tuition—some in the middle of the academic year—to compensate for massive state budget cuts.

Campbell ultimately made it through and is starting law school at UCI this fall. But he watched classmates driven out of college by the unpredictable mid-year price hikes.

Now he's pushing an amendment to the California constitution that would ban public universities from raising tuition for students after they've enrolled.

"Students and families are fed up," Campbell says. "And that's only going to get worse. As more and more students have to deal with these problems, it's just going to keep building until the problem is fixed."

After three decades of tuition hikes that have outpaced inflation and increases in family income, students, families, legislators and governing boards are demanding a halt.

"Enough is enough," says Anne Mariucci, a member of the Arizona Board of Regents, which for the first time in 20 years has frozen in-state tuition at the University of Arizona and Arizona State University after increases over the last five years of 84 and 96 percent, respectively.

Some private universities, too, have agreed to stop raising their tuition, or even cut it, after being alarmed to discover their enrollments starting to slip.

"The pushback is beginning," says John McCardell Jr., president of the University of the South in Sewanee, Tenn., which last year cut tuition 10 percent and this year is promising to keep the cost unchanged for entering freshmen for four years. Sewanee, as the university is known, was losing students to the University of Tennessee, the University of Georgia, and other cheaper public institutions, McCardell says, and the size of the entering class was beginning to slide. 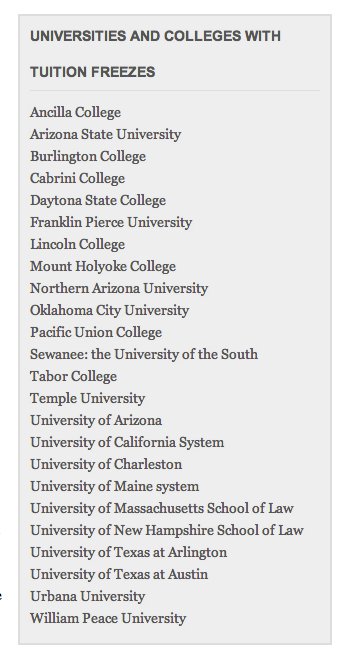 "Price probably has more than nothing to do with that," he says. Students and their families "are voting with their feet."

Or with their votes. The Arizona regents were reportedly being pressed to get a handle on tuition by the governor and legislators. They, in turn, were hearing from increasingly angry constituents. "About time," read the headline on an editorial in the ASU State Press, the student newspaper, when the tuition freeze was finally proposed. "As prices continue to go up, you have people saying, you can't keep doing that," says Rick Myers, chairman of the Arizona Board of Regents.

The 10-campus University of California system also froze undergraduate tuition for this fall after the governor and legislature there made doing so a condition of a $125 million budget increase—though there's a hitch: Tuition will increase more than 20 percent in the middle of the year if voters fail to approve a tax increase in November to raise $8.5 billion for public education and other services, a quid pro quo that some critics say is blackmail.

Texas legislators have long pushed for a tuition freeze at that state's public universities. When Gov. Rick Perry added his voice to the chorus this year, his appointees on the board of regents agreed—over university officials' objections—to forgo a planned 5 percent increase over two years at the flagship University of Texas–Austin, where tuition now will be unchanged. Tuition also will be frozen at the Arlington campus. "It isn't in the interest of most Texans for universities to be continually raising their tuition rates," Perry was quoted as saying.

Not coincidentally, the number of law-school applicants plummeted by more than 15 percent for the academic year that begins this fall—on top of declines of 10 percent in each of the previous two years—according to the Law School Admission Council. The number of students taking the Law School Admission Test this year suggests the trend will continue. Meanwhile, one third of law-school graduates in 2010 did not have jobs nine months later, and starting pay for those who did was down 13 percent. Phoebe Haddon, dean of the University of Maryland's law school, cited "the impact of the economic downturn on the legal employment market" as one of her reasons for freezing tuition.

Colleges and universities have long been reluctant to lower or cap their prices, McCardell says, because—as with new cars and fine wines—they believe students and their families equate price with prestige. That, he says, is why elite private colleges all magically end up within a few hundred dollars of one another each year.

Supply and demand have not traditionally affected the price of higher education. That's because supply largely remained unchanged, while demand was ever-rising. But the number of high-school graduates, which peaked in 2009, is starting to decline. Enrollment fell at more than 40 percent of colleges and universities last year, according to the credit-rating firm Moody's. At least 375 institutions still had space available for this fall when the admissions period was over, the largest number in a decade, the National Association for College Admission Counseling reports. The percentage of accepted students who actually enroll is also falling. A recent analysis of public and private nonprofit colleges by Bain & Company found that one third were on an "unsustainable financial path."

Colleges that are especially feeling the squeeze are those with small enrollments and endowments—and those are also the kinds of private colleges and universities that are maintaining their tuition levels to remain competitive.

Private Oklahoma City University, for instance, competes with more than 25 public institutions—most of them cheaper—in a state of fewer than four million. "Access to higher education is broad here," says Susan Barber, provost at the university, which froze tuition this year. "We had discussions that we hoped this would help retention of students and in our recruitment efforts. It wasn't completely an altruistic decision."

Other schools that have frozen their tuition this fall include Burlington College in Vermont, which has about 200 undergraduates; Ancilla College, a Catholic, two-year liberal-arts college in Indiana with about 530 students; the 730-student Tabor College, a Mennonite school in Kansas; liberal-arts Urbana University in Ohio, which has 1,270 students; Franklin Pierce University in New Hampshire, which has 1,300 undergraduates; and Pacific Union College, a Seventh-Day Adventist college in California with an enrollment of 1,530.

"The question is, how much can you charge for your product? And that is a reflection of the laws of supply and demand and your sense of your own position in the marketplace," McCardell says. "Why are people shopping at Costco and Sam's Club? That's a terrible analogy, but I can get a really good box of cherries at Costco for a whole lot less than I can get them at the Piggly Wiggly."

This fall, a few private colleges and universities—trying to compete with cheaper public institutions—are offering Costco-style markdowns. In New Jersey, for instance, private Seton Hall is matching the price of public Rutgers University for freshmen with top grades and SAT scores. That comes to about a 60 percent discount. Cabrini College, near Philadelphia, cut its tuition 12.5 percent and promised not to raise it above $30,000 through at least 2015.

Lincoln College, a private two-year college in Illinois, lowered its tuition 24 percent and the University of Charleston in West Virginia 22 percent, both in response to declining enrollments. William Peace University, a women's college with 700 students in North Carolina, slashed tuition nearly 8 percent to attract men as it becomes co-educational, and to increase its enrollment by 50 percent. And Duquesne University, in Pittsburgh, is responding to a big drop in applications to its school of education by giving 50 percent discounts to incoming freshmen.

If students and their families are straying from expensive institutions, a few schools that are freezing or reducing what they charge seem to be winning them back. At Sewanee, applications have risen 17 percent, and the number of entering freshmen is up more than 12 percent. Oklahoma City University has 30 more freshmen enrolled this fall than last, and the number of students dropping out is down.

Back in California, Christopher Campbell is juggling law school and his referendum campaign to keep tuition flat for students who enroll at the state's public universities.

This story also appeared on NBCNews.com on August 1, 2012.