My son is a senior in high school this year.

Last week, my son and I did what many have done before us: We visited a college campus. We spent the night in a hotel, took a tour the next day, spoke to some students and ate some college food.

And my mom came too. Because the school we visited is her alma mater. And that of my brother as well. A lot of memories and a lot of family history.

I experienced so many levels of happiness over the less-than-48-hour trip.

First, I never get to travel solo with my son. His younger sister and I have taken trips together, alone. But not me and him. And he is really a great companion. He can easily reach the overhead compartments, listens to music while in flight and can move fast when we only have a few minutes to get to a gate.

Plus, traveling with three generations was special. The experience of having the three of us in a hotel room together. Going to lunch, dinner and breakfast. Talking about the country's education system, watching goldfish poop and cutting pizza with a pair of scissors. (I'm being serious here. It was great.)

And then, walking around the campus and seeing him amongst all of those college students? I kept thinking, He's ready. No matter where he ends up, he'll be fine. I didn't expect that sentiment to be so strong, but it was. And feeling that way was very comforting for me.

I'm so excited for him to start this next part of life. He is too. And I'm really proud of the person he is becoming... except for when he tortures his sister.

The two of us have started saying things like, "This is the last time I'll be doing this," and, "You won't be here for that next year." Talking about him leaving in those terms makes me feel like I'm at the edge of a cliff with only the sky in front of me and I can't go on.

Because I can't. I can't go to college with him. I can't be there every day with him. This is the next step. One of the things we work so hard at preparing our kids for. Letting them go. And like I said, he's ready.

I keep telling myself that I'm not dreading him leaving home. I know I'll miss him, but I've had experience being away from him for long periods of time. And I was OK. And he loved it.

I don't think that I'll be a puddle of goo come August when I take him wherever he decides to go, help him unpack and set up his room and then drive away watching him get smaller and smaller in the rear view mirror.

I really don't think so. But what do I know. We have ten months left together. 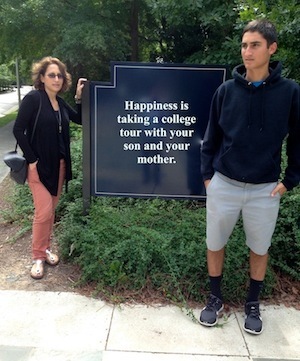 US Presidential Election 2020
Breaking news, analysis and the latest polls on the presidential race from HuffPost’s politics team
See More
Voting Made Easy
Register to vote and apply for an absentee ballot today
Register now
More:
collegeleaving for collegecollege applicationsParentsCollege Admissions
Newsletter Sign Up
Raise the kind of person you'd like to know
Subscribe to our parenting newsletter.
Successfully Subscribed!
Realness delivered to your inbox