Who would have imagined that a virtually failed state, with rampant drug trafficking, kidnappings, murders, institutional instability, lack of justice and a 50-year-old internal conflict would become one of the best performing economies in the world only a decade later? No one; except Michael Geoghegan, president of the Anglo-Chinese HSBC, who during a speech to the Hong Kong Chamber of Commerce in April of 2010 first explained a concept that he had come up with: "The CIVETS."

The theory refers to a select group of world economies whose positive indicators such as low inflation, market attractiveness and sophisticated financial systems, amongst others, foretell a promising future. Amongst them are Indonesia, Vietnam, Egypt, Turkey, South Africa and, surprisingly, Colombia. CIVETS are the next tier of emerging economies, after the "BRICS": Brazil, Russia, India, China and South Africa, all newly industrialized countries that have developed at a fast pace. Three years have passed since the idea of the CIVETS was first floated, and at least in the case of Colombia Mr. Geoghegan was spot on. The numbers speak for themselves:

The third quarter results from 2013, the latest data available, reflect that Colombia had the highest GDP growth in the region (5.1 percent), surpassing Chile (4.7), Peru (4.4), Uruguay (3.3), Brazil (2.2), Mexico (1.3) and Venezuela (1.1). According to Bloomberg News: "The expansion [Colombia's] was faster than the 4.3 percent median forecast of 31 analysts surveyed. GDP expanded 1.1 percent from the previous quarter."

In addition to having the fastest growing economy in the region, Colombia's economy places 15th worldwide, behind countries like Singapore, Indonesia and China. Just a decade ago it was only growing at a 1.4 percent rate. The investment rate of its GDP is also at its highest level: 28.4 percent compared to 24.5 percent in 2010.

And at a time when widespread unemployment plagues both developed and developing economies, in the last three years Colombia not only created more jobs than any other country in Latin America between 2010 and 2013 (over 2.4 million at a rate of 10.7 percent of the labor force. Chile second (8.5 percent) and Peru third (5.6 percent), but also lowered the national unemployment rate to 7.8 percent for October, the lowest level since 1995. "Formal jobs are being created at a much higher rate than informal jobs which is an indicator of healthy labor policies and long-term stability," says Mauricio Cárdenas, Colombia's Minister of Finance.

Other exceptional numbers include: The lowest level of inflation in the region (1.94) followed by Chile, Peru and Mexico. The second largest reduction in poverty between 2010 and 2012 in Latin America, according to the World Bank, and the largest reduction of inequality during the same period. This means that Colombia's GINI coefficient decreased the most. The country was once ranked as the second most unequal country in Central and South America after Haiti, but over the last couple of years it has dramatically improved its position in the list. The "Misery Index" (Inflation +unemployment) stands at historically low levels.

The international community has also changed its perception of the Colombian economy. Last year Colombia was accepted as a member of the OECD, an organization grouping an exclusive list of countries that apply the best socio-economic policies. Additionally, rating agencies, including Standard & Poor's, Fitch Ratings and Moody's have all raised the country's credit rating in the last year.

According to Reuters, Fitch Ratings cited:

"Improving debt dynamics and "credible and consistent policies," as reasons for the upgrade, adding that Colombia's medium-term growth prospects remain favorable compared with several of its rating peers and should be supportive of fiscal performance.

Perhaps thanks to that, foreign investment levels have broken all records during 2012 and 2013. According to the Economic Commission for Latin America (CEPAL for its Spanish acronym) in 2012 Colombia was the third country in the region that received the most Foreign Direct Investment with US$15.823 million, beating out Mexico, and only behind Brazil and Chile.

The future is promising. Thanks to new housing and infrastructure policy the government is setting in motion, GDP growth is expected to reach between 5.0 and 5.3 in the coming years. Additionally, if the peace process with FARC rebels -- currently underway in Cuba -- is successful, Colombia's growth could be positively impacted even more (approximately to 7 percent), as the government would be able to better use its resources to boost education, health, technology and social programs. Mr. Geoghegan was right: Colombia is a shooting star. 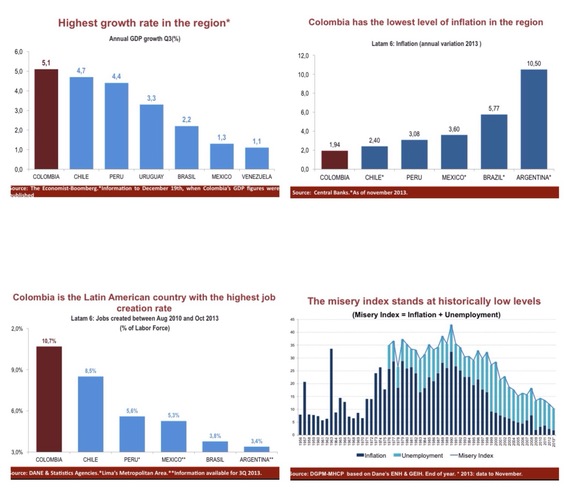