While Colombia, the U.S.'s staunchest ally in the Hemisphere, is held out as some beacon of democracy in Latin America, the facts on the ground tell a very different story. Of course, you will rarely hear those facts, or about Colombia at all, given the general laziness and slavishness of our main stream media, so here they are. 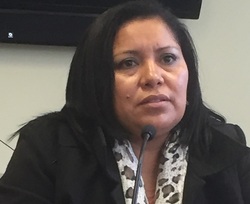 Last year, according to the Resource Center for Conflict Analysis (CERAC), there was a huge spike in the murder of social leaders, political party activists and union members compared to the year before. Thus, such murders jumped 35% from 78 in 2014 to 105 in 2015. Specifically, the rate of union murders more than doubled from 2 to 7; the rate of political leaders and activists killed increased 66% from 15 to 25; and the murder of public officials, teachers and journalists jumped 31% from 29 to 38. In terms of the murder of political activists/leaders, moreover, most were from opposition, left-wing parties. Indeed, 6 leftist political leaders have been killed already in 2016.

And, of particular note, CERAC explains that the aforementioned murders are NOT the product of the armed conflict in Colombia between the Colombian government and the FARC guerillas. Indeed, CERAC explains that the cease fire which the FARC has been engaged in as part of the peace process has not contributed to a decline in political violence. This is because most of this political violence is being carried out by right-wing paramilitary groups aligned with the Colombian state, though both the U.S. and Colombian governments go to great pains to deny the continued existence of such paramilitaries.

As CERAC further explains, those who have been disproportionately victimized by political violence (which includes both murders and threats) have from the LGBTI community and from the "traditionally victimized" groups of Afro-descendants and indigenous peoples.

CERAC relates that "in 2015 deaths of indigenous leaders far exceeded those of other vulnerable populations who defend human rights in the country: they correspond to 20% of the total." This, despite the fact that indigenous peoples, numbering around 1.4 million, only make up 3.3% of the total Colombian population.

Truthfully, these figures do not even begin to capture the devastation which the indigenous peoples of Colombia are suffering. As Arelis Maria Urinan Guariyu, the Councilor for Women of the National Indigenous Organization of Colombia (ONIC), and a member of the Wayuu tribe in Colombia's La Guajira Peninsula, explained to a group of us last week in Washington, D.C., 34 of the 102 indigenous tribes in Colombia are on the verge of extinction. According to the United Nations, this in fact may be an underestimate, with possibly over 40 tribes at risk of total annihilation. In total, over 62% of all indigenous peoples in Colombia are at risk of extinction.

And, Arelis, CERAC and the UN agree on one thing: the main cause of the violence against and existential threat to Colombia's indigenous population, and to the Afro-Colombian community as well, is from mining operations in that country. Indeed, according to a report by ABColombia, a UK-based NGO coalition, "[s]ome 80% of human rights and international humanitarian law violations in the last 10 years have been carried out in mining and energy regions in Colombia . . . ."

As Colombia Reports has explained quite well:

Mining operations in Colombia have a notorious history when it comes to violence, displacement, and toxic exposure. In what became an internationally infamous case, the Cerrejon mine owned by Exxon-Mobile destroyed the entire [Afro-Colombian] village of Tabaco in 2001, and displaced all of its residents with the help of armed security forces . . . .

The Cerrejon mine, named for "a nearby mountain held sacred by the indigenous Wayúu people, who comprise 44% of La Guajira's population," is now owned by a joint venture of Glencore, Anglo American and BHP Billiton. As Arelis explained to us, this mine continues to pose a threat to the existence of the Wayuu people, as well as to Afro-Colombians living in La Guajira. This threat is in the form of both forced displacements as well as the ravaging of La Guajira's natural resources.

As just one example of the latter, the Cerrejon mine utilizes 17 million liters of water per day, while each resident of the dry and arid La Guajira has access to less than one liter of water per day. The impact upon the Wayuu peoples is devastating, according to the Inter-American Human Rights Commission. Thus, as reported recently by Telesur,

The Inter-American Human Rights Commission (IAHRC) is demanding the Colombian state adopt measures to protect the children and teenagers of the Wayuu community after activists and indigenous leaders said that about 4,770 of them died over the eight past years as a result of malnutrition and lack of clean drinking water.

The human rights body, part of the Organization of the American States (OAS), said the Wayu people -- "powerful humans" in the Arahuaca language -- were suffering high levels of child mortality, putting in danger the survival of the group as a whole. . . .

The Wayu community, which represents almost half of the local population living in La Guajira, lost valuable hectares of land, as well as the access to the Rancheria River, as a result of mining exploitation that expanded in the area as result of it being home to the world's largest coal reserve, called El Cerrejón.

This phenomenon is being played out throughout Colombia, particularly in the rich and coveted lands of the Pacific and northwest Caribbean coasts to which the indigenous peoples and Afro-Colombians hold title. And, those who actively resist such mining interests are at risk of assassination by paramilitary groups which work hand-in-glove with a number of mining companies and which, in some cases, even own mining operations themselves. The result is that the indigenous peoples and Afro-Colombians are bearing the disproportionate brunt of the increasing political violence in Colombia.

Sadly, this tragedy is taking place in almost total silence, at least here in the U.S. where it is inconvenient to talk about the terrible human rights situation of the U.S.'s closest ally in the Hemisphere.