Colombia is taking its dance party to the World Cup quarterfinals.

With breakout star James Rodriguez contributing all the scoring, Colombia defeated Uruguay 2-0 in the Round of 16 at Estadio do Maracana in Rio de Janeiro on Saturday. The result sent Los Cafeteros into the quarterfinals at the World Cup for the first time ever and ended a tumultuous trip to Brazil for Uruguay.

Rodriguez opened the scoring in the 28th minute with what may end up being remembered as the most impressive goal of the entire World Cup. The 22-year-old who plays for AS Monaco in France controlled a pass with chest, his back turned away from the goal, and then sent a jaw-dropping left-footed volley over the head of Uruguay goalkeeper Fernando Muslera.

Playing without banned striker Luis Suarez, Uruguay was unable to muster a response in the first half -- or the second. Suarez was not in the lineup or in the country after being hit with a nine-game ban for biting Italy defender Giorgio Chiellini during Uruguay's final group-stage match.

In the second half, Rodriguez doubled the Colombia advantage and took the lead in the race for the Golden Boot. The second-half tally was his fifth goal in four matches at the World Cup.

If you didn't know James Rodriguez before the World Cup, you do now. He's the top scorer of the tournament. WATCH » http://t.co/UhXKx2iSov

In its first appearance in the World Cup quarterfinals, Colombia will face Brazil. The hosts survived a penalty shootout with Chile to advance. Colombia and Chile are set to play on Friday, July 4 at Estadio Castelao in Fortaleza. 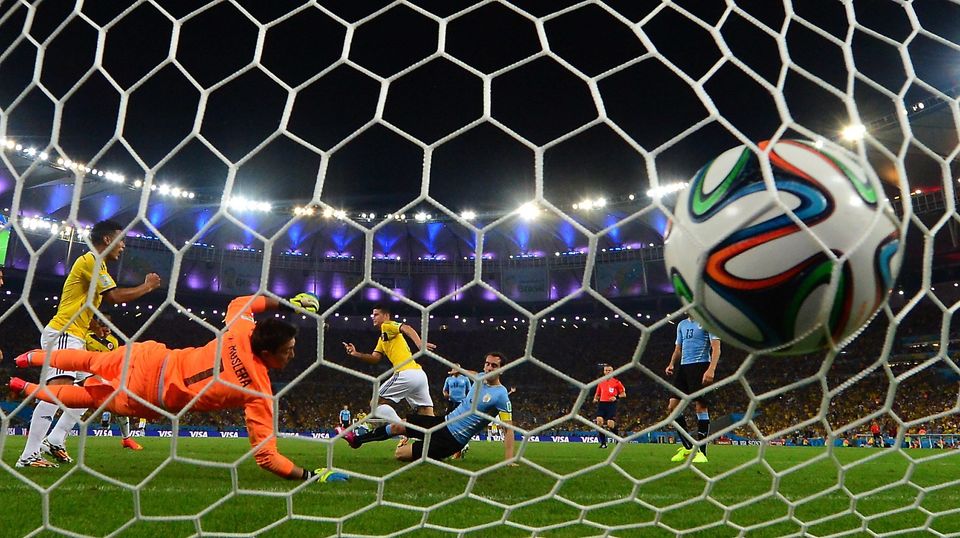