As Colombian President Uribe tours the globe in support of a Free Trade Agreement with the U.S., Canada and the EU, the union workers in his country continue to be killed at levels unprecedented in the world. So far this year, 17 unionists have been killed in Colombia, putting Colombia on a pace to exceed the figure of union leaders killed last year (49) and the year before (39) - figures which motivated Barack Obama to oppose the Colombia FTA in the first place. 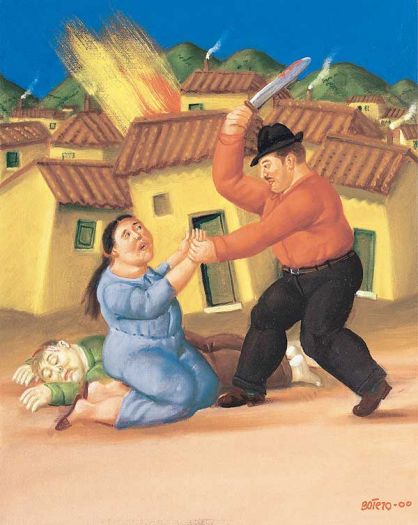 Francisco Javier Ricaurte Gomez, the President of the Labor Section of the Colombian Supreme Court, recently mentioned to me in a meeting we recently held in Pittsburgh, that he sees in these killings "the dark hand of the state." And indeed, the U.S. State Department continues to detail the strong connections between the Colombian state and military and the outlawed paramilitary groups which are largely responsible for these killings, making one wonder if those in charge of negotiating these trade pacts are actually reading their own governments' human rights reports.

According to the most recent 2009 State Department Country Report on Colombia, sectors of Colombia's official armed forces "collaborated with or tolerated the activities of new illegal groups or paramilitary members who refused to demobilize. Such collaboration often facilitated unlawful killings and may have involved direct participation in paramilitary atrocities."

The State Department also reported (in its typical understated fashion for countries the U.S. is aligned with) that "[p]olitical and unlawful killings remained an extremely serious problem, and there were periodic reports that members of the security forces committed extrajudicial killings during the internal armed conflict." In fact, around 1,600 civilians have been the victim of extra-judicial killings by the Colombian military itself since President Uribe took over as President in 2002 - a massive increase from Uribe's predecessor. Indeed, the UN High Commissioner for Human Rights recently declared that these extra-judicial killings by the military are on such a scale that they amount to a "crime against humanity."

And, as the State Department explained, many of these killings involved the phenomenon of "false positives" - that is, of "military officials paying illegal groups to forcibly recruit young men, transport them to another town, and turn them over to local brigades who then killed them and presented them as guerillas killed in combat."

Of equal concern is the continued displacement of Colombians by the Colombian military's aggressive counterinsurgency program. As noted by Garry Leech in the Colombia Journal, the well-respected Colombian human rights group CODHES reported 380,000 more Colombians displaced last year - a 24% increase over the prior year, adding to the already swelling ranks of the 4 million internally displaced Colombians. As it stands, Colombia ranks second only to the Sudan in terms of the number of internally displaced persons.

And, as Leech points out, the Norwegian Refugee Council directly attributes this worsening situation to "[t]he government's military strategy which was intended to be preventive, [but] is instead resulting in an increased displacement of people." Morever, if the U.S. and the E.U. consummate FTAs with Colombia, the problem of displacement (already the second in the world only after the Sudan) will only intensify. This is because the agricultural provisions of the FTA would allow cheap, subsidized farm products from the U.S. and the E.U. to flood Colombian markets tariff-free, undermining the livelihood of small Colombian farmers (who make up 23% of the Colombian population), many of whom will lose their land as a result and join the ranks of the displaced.

We saw this with small farmers in Mexico, 1.3 million of whom were displaced by similar NAFTA provisions - a phenomenon which has led to Mexico's status as a "failed state." The New York Times, in its March 24, 2009 piece entitled, "Nafta's Promise, Unfulfilled," noted this phenomenon, explaining that "Local farmers were priced out of the market by food imported tariff-free. Many Mexican farmers simply abandoned their land and headed north. Although one-quarter of Mexicans live in the countryside, they account for 44 percent of the migrants to the United States."

In short, basic concern for human rights militates against entering into free trade accords with Colombia. In the end, however, the interests of business appear to be trumping human rights in the current discussions over the FTA's, and indeed, businesses themselves continue to fuel the dire human rights situation in Colombia.

This fact was brought home again last week when it was revealed (at least in the Spanish-speaking press though not in English) that top paramilitary leader Salvatore Mancuso (now in U.S. custody on drug charges) has given testimony to the Colombian Attorney General's office about Alabama-based Drummond Coal Company's connection with the 2001 murders of 3 top unionists by the AUC paramilitaries. Thus, Gerardo Reyes of El Nuevo Herald revealed Mancuso's testimony which confirmed that Drummond, through an individual named "Mr. Jim," paid the AUC paramilitaries to carry out these killings.

Mancuso had previously testified that major companies in Colombia, including U.S. companies Chiquita, Dole and Del Monte had also made payments to the AUC paramilitary group - an illegal group designated as "terrorist" by the U.S. State Department. Sadly, Dole, Del Monte and Drummond have never been charged for their role in supporting this terrorist organization in Colombia. And Chiquita, which admitted to paying paramilitaries over $1.7 million - leading, according to Colombian Attorney General Mario Iguaran, to the killing of over 4,000 civilians -- Chiquita was given the lightest of punishments, being fined $25 million which it was allowed to pay over 5 years.

The continued impunity given these companies, combined with the failure to fully acknowledge the facts about Colombia's worsening human rights crisis, greatly undermines the moral authority of the governments rushing to make a trade deal with Colombia. Those interested in labor and human rights must hold these governments accountable by pressing them to refrain from entering into such deals.