Earlier this month, we introduced you to Tard, perhaps the grumpiest cat the Internet has ever known. Now say "hello" to Colonel Meow, possibly the angriest cat in the world.

The fabulously furry feline, rescued from the side of a Washington state road last year, is a rising Internet sensation. The cat has a Facebook page -- "liked" by more than 67,000 fans -- through which he addresses his "minions" with a combination of haughtiness and sarcasm. There's even a Colonel Meow "Know Your Meme" post and popular Twitter hashtag, #spreadthefrown.

A YouTube clip of the Colonel mocking Boo, the "world's cutest dog" has been viewed nearly 200,000 times since it was posted two weeks ago. The video exhorts fans to "Like me on Facebook, Minions!"

According to Facebook, Colonel Meow likes to eat and is really good at staring and planning world domination. He's also apt to fall asleep at any moment.

I'm a Cat. I have the unfortunate ability to shit in my fur. Sometimes when I'm scared I open my eyes really wide and then fall asleep. I like to go on walks with my leash, but when that gets hard I sit down. I like my friend Boots, a stupid golden retriever who never know when I'm sneaking up. My favorite thing to do is eat. When I'm not eating, I feel like I forgot to eat so I go back to eat again. I'm really good at staring, and if I stare too long I forget what I'm doing and fall asleep. I'm really fluffy so I cough up a lot of hair balls. That scares me, so much so, that I will meow until someone comes and holds me. I'm the apartment police. So if you are going to the bathroom I might scratch and meow at the door to say, "who's in there? open up!" I like my butt scratched.

Colonel Meow, however, owes a lot of his success to the woman who articulates the attitude behind the scowl: 28-year-old Anne Marie Avey, a cat lover from Seattle who adopted the black and gray furball from Petco nearly a year ago on Oct. 11, 2011 (his adoption birthday, according to Avey).

"I am completely amazed," Avey told ABCNews.com. "I naively didn't know you could get so much attention based on Facebook. I just did it for friends and family to see what we were up to everyday and get a feel for Colonel. I thought it was a big deal when we were up to 166 likes and half of them were people I didn't know."

She said put Colonel Meow on the Web because his hilariously grumpy facial expressions were too good to be hidden away.

"I would roll out of bed and look at Colonel and he would just be staring at me and I'd just start laughing,” she told KING 5. “He had all these types of faces and positions he would get into and I just had to share it.”

Avey said she and her boyfriend will be creating Colonel Meow T-shirts for Minions who would like to wear the angry visage on their chests.

Next stop? The White House.

"There are plans to run for president," Avey said. "We'll be accepting write-ins on the ballot."

Check out Colonel Meow's best photos in the slideshow below: 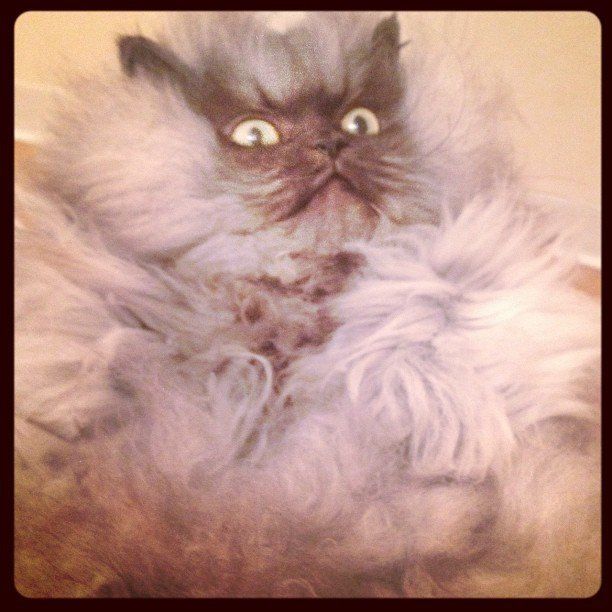 1 / 12
Drink it in, Minions. Cuz all THIS will be on Anderson Cooper Live today. Tune in and see my World Domination in action. Anderson Cooper is a Minion. Even he is unable to resist the frown. ]:
Facebook: Colonel Meow