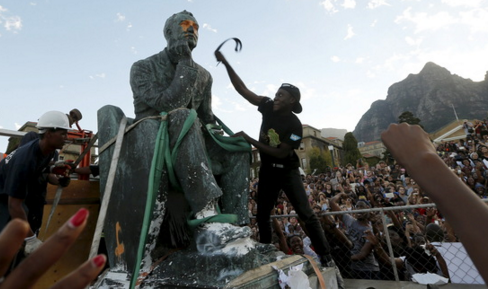 The Portuguese set foot in South Africa in the 15th century, and the Dutch settled at the "Cape of Storms" in 1652. But the noses of the first interlopers into southern Africa were not sharp enough to fore-smell Kimberley's hidden diamonds or the Witwatersrand's entombed gold.

Diamonds were only discovered in 1867 at Kimberley, and, 19 years later, gold on the Witwatersrand.

The group - of mainly Englishmen and Jews - that descended on Kimberley, following the discovery of diamonds was largely the same bunch of money-mongers who flocked to the Witwatersrand when news of gold broke.

In Kimberley, Rhodes persuaded most of these men - some of whom were initially his arch-enemies, such as Barnato - to form a cartel to control the price of diamonds in London, then the centre of the global diamond trade. De Beers became the cartelised company, named after brothers Johannes and Diederik De Beer, who had sold the land on which the diamonds were discovered.

On the Witwatersrand, these men formed many gold companies financed by money they had made at Kimberley and through investments from London, Paris, Berlin, and the US. Although Rhodes was by no means the richest his company, the Goldfields Company, was among the giants.

What made Rhodes stand out was his profound understanding of the uselessness of money for its own sake. For him, money was an instrument in a big imperial "game". Difficult as it was, he did manage to convince some of the money-mongers who surrounded him to support his mega imperial schemes.

It got to the point where these men became so wealthy that their clout was felt in British politics. Rather disapprovingly, the English media coined and gave them the name "Randlords" - to make it plain that the "Rand" was the origin of the wealth of these insidious "Lords".

Of particular interest to South Africans is the legacy the Randlords left the country.

First, it is important to acknowledge nature for endowing Kimberley and the Witwatersrand with vast natural wealth, and then proceed to appreciate, maturely, the fact that the Randlords brought know-how, money and the technology by which to exhume dormant wealth from beneath the country's soil.

The civilisation that waves at South Africans from the dizzying heights of Johannesburg's skyscrapers came to the country's shores with the Randlords. The highways on which the tyres of comfortable German cars glide would not be there without the Randlords.

The idea of the railways that continue to enable South Africa to export its natural resources was first fermented in the heads of the Randlords. So too the national grid of highways. Beit Bridge, the main crossing point between South Africa and Zimbabwe, is a reminder that Alfred Beit offered a hand to Cecil John Rhodes, as he forged ahead to create what he called "the road to the north" - today's N1.

In the world of political correctness, an arena populated by self-congratulators, it is dangerous to say something positive about those whom a group has already condemned. Group-think is the norm.

Make no mistake; the Randlords were not angels. And they did not muddy their hands. South African author Sarah Gertrude Millin was right to note that:

The Kaffirs do nearly all the unskilled labour in South Africa. ... On the farms they, and not the farmers, do the planting and reaping and herding. ... They dig the trenches and lay the roads.

In their imagination, the Randlords did not envision the black man ever making use of the civilisation they were erecting, let alone ever ruling South Africa. That is why they never gave black people the education they imparted to their children. To them, black people were permanent "savages".

The cruel idea of detaining black workers in dehumanising compounds was introduced by the Randlords. Rhodes even sponsored a law that authorised mine owners to strip black workers naked, and force them to swallow laxatives before they could go home, hoping to flush stolen diamonds out of the native's stomach.

Thus, the Randlords left behind them a big dilemma: contemporary South Africa is not sure whether to thank them for bringing civilisation, or to curse them for complicating future race relations. Unfortunately they can't receive a memorandum of grievances, were the country's citizens to chant to their graves.