This special eyewear is giving many a new outlook.

EnChroma, a company in Berkeley, California, has created colorblindness correcting glasses, which allow those who are colorblind to see hues they may have never experienced before. While the sunglasses, which are meant for outdoor use in daylight, were first released two years ago, the company's new version is made from polycarbonate -- a material that's kid-friendly and usable in sports. 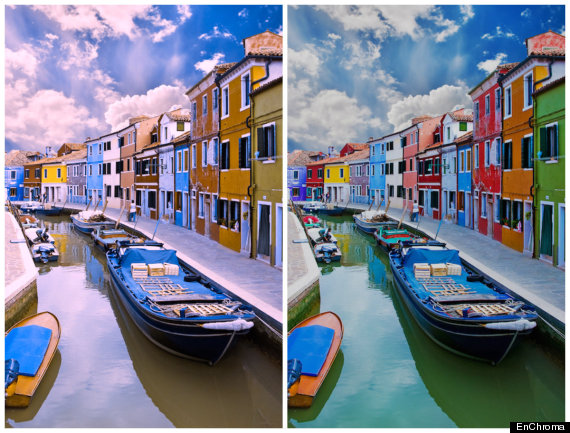 It's an improvement that could help a significant number of people.

An estimated 32 million Americans experience some degree of colorblindness, according to the Wall Street Journal. The eyewear, which range from $325 to $450 and address red-green colorblindness -- the most common form -- have the potential to help four in five people with the condition by making everyday, outdoor tasks easier.

"Color-coded tasks, like driving, enjoying nature, playing sports, cooking and eating, are all improved," Donald McPherson, co-founder of EnChroma told The Huffington Post in an email.

The product was originally intended to be laser safety eyewear for surgeons, but one of McPherson's friends who was colorblind borrowed the prototype and saw a range of colors for the first time. The incident influenced McPherson to shift focus and produce a product targeting people with the condition.

The idea has since come a long way, and this latest version, which is available to both prescription and non-prescription wearers, isn't where the advancements end for the company. On top of working to make the glasses more accessible for colorblind people, EnChroma is also hoping to target their work on children -- the age group where they say they can make huge inroads.

"The young mind in neurally plastic," McPherson told HuffPost. "Studies have shown that color deficiency leads to a loss of information ... We feel that by offering these glasses to kids we will see remarkable improvements in learning." 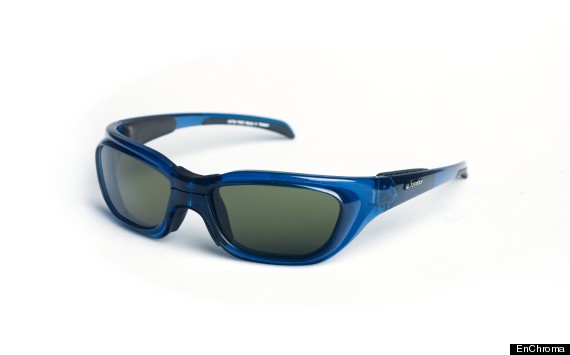 1
New Year - Curved Phones
The Consumer Electronics Show, followed by Mobile World Congress will bring back an old familiar friend: the curved phone. LG experimented with the G Flex and while it had its flaws, people enjoyed it. Fast forward to the Galaxy Note Edge and opinion of the experimental technology has further increased. It's ready to be the next major 'gimmick' for smartphones and this time it might actually turn out to be quite useful as well.
2
Spring - Smart Watch 2.0
The Apple Watch might appear to be just like any other smart watch but when it arrives the functionality it'll bring to Apple's ecosystem of products will almost certainly drive innovation elsewhere. If there's one thing that pushes a technology firm forward it's making sure that they're better than the other guy. Android Wear for iOS? Probably not, but what it will do is drive Google to persuade more people over to Android, resulting in better Android Wear updates, better smart watches. The smart watch may have arrived in 2014 but it'll be something you actually buy in 2015.
3
Summer - Games That Live
Ubisoft's The Division is looking to be, quite frankly, an incredible game. Not only is it one of the best-looking games around but it also happens to be potentially, one of the most futuristic. Where Destiny failed to live up to its promise of being a 'new genre', The Division has innovation built into its very coding. Players drop in and out of a living world, teaming up, playing solo or just joining the action from their tablet as a 'drone'. If you were disappointed with the phrase 'next-gen' then hold on, it's coming and it's coming soon.
Advertisement
4
Autumn - A Quantum Leap In Television
4K is the future, if you don't believe us then read this. If you do, then prepare yourself as while 2015 won't bring more pixels it's going to make them look better than you've ever seen before. LG's Quantum Dot technology uses tiny nano crystals which -- dependent on their size -- will show through a different colour. This is then placed on top of a conventional display with the result being that colours look astonishingly defined.
5
Winter - The Death Of The Laptop
If you still think the ultra-portable laptop still has a place then we'd politely direct you to the Surface Pro 3. Similarly if you think that Apple won't conform to changing trends then just look at the iPhone 6. This is the time of year that Apple releases its new product range and this could well be the year that Apple gives its iPad the overhaul it desperately needs. Hugely powerful in many ways the iPad suffers from a number of barriers that stop it from being a true laptop replacement. To combat this you can expect a larger screen, stylus support and possibly a kickstand. OK maybe not that last one, but still, the times they are a changin'.