The first color photo of Comet 67P/Churyumov-Gerasimenko has been released, and it's a little anticlimactic.

The comet itself, where the Rosetta spacecraft's Philae lander arrived last month, is so gray that a black-and-white image probably wouldn't look much different.

This "true" color photo shows what the comet would look like to the human eye, and was created by superimposing images taken through filters centered on red, green and blue wavelengths, the European Space Agency (ESA) said in a news release. 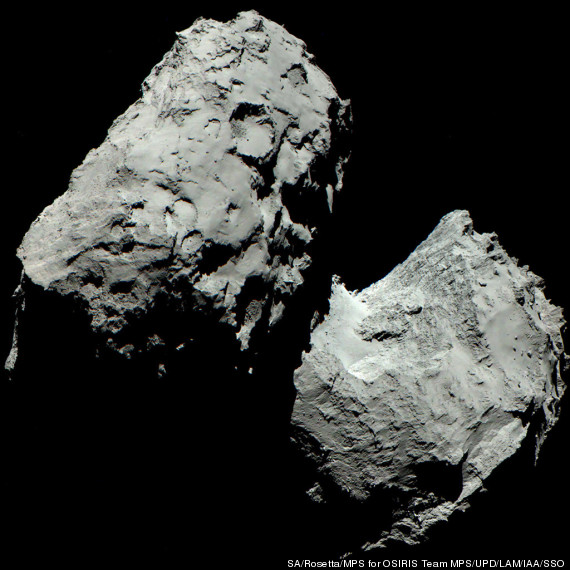 “As it turns out, 67P/C-G looks dark gray, in reality almost as black as coal,” Holger Sierks of the Max Planck Institute for Solar System Research and principal investigator of the Rosetta's OSIRIS camera instrument, was quoted as saying.

An earlier image showed the comet to be a reddish color, but the agency said that's because 67P reflects red light more efficiently than other wavelengths and not what it would look like to earthlings.

"Natural sunlight peaks in the green part of the spectrum and the response of the human eye is similarly matched," ESA scientists noted in a press release. "Thus, overall, the comet would look rather gray to the human eye, as seen here."

If there was any ice on the surface, the comet would have some blue spots. But ESA says the comet is covered in a dark dust, and that one of the spacecraft's upcoming missions will include trying to determine just what that dust is made of by using other combinations of the 25 OSIRIS filters.