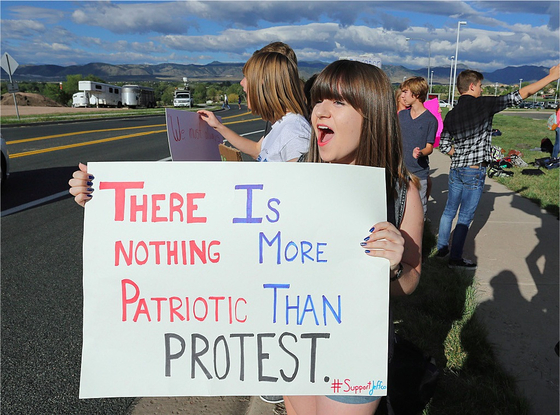 I've been paying close attention to the events in Colorado in which students and faculty members of Jefferson County high schools have been protesting the formation of a curriculum review committee that would require students to learn a sanitized version of history that encourages blind patriotism and discourages any sort of protest.

This topic is important to me for two reasons.  First, I'm a graduate of a Jefferson County high school (Wheat Ridge HS Class of 1993).  Second, history education is my field of expertise at the University of Arkansas, so the proposed changes to the curriculum in Jefferson County are right in my wheelhouse.

Specifically, the proposed committee will be charged with reviewing curriculum to make sure that:

Cries have arisen over the fact that the Jefferson County school board is populated with members that won elections with considerable financial support from conservative and corporate interests, and these points are valid and troublesome. If you read between the lines of the committee's charge then you might arrive at an interpretation similar to the one I did - primarily that history education should glorify the United States, promote jingoistic ideals of citizenship, and downplay all negative aspects of our history by treating them in a "balanced and factual" manner.  In other words, interpretation of history is perfectly okay as long as it preaches American greatness, but is forbidden when it comes to the darker underbelly of our collective past.

I was thinking about all the fancy academic arguments I could make against this notion while driving to work this morning when I happened to press the first station preset button on my satellite radio - which I'm not ashamed to admit is set to the 80's music channel.  Then the simplest analogy hit me:

In many ways, jingoistic history education has the same effect on our civic ignorance as 80's music stations have on our collective memory of the 1980's.

What do I mean by that?  Think for a moment about the music that is played on the 80's station.  Of the thousands of songs that were recorded during that decade, only a few hundred of them remain in regular rotation.  I'll bet you'd hear Beat It or Come On Eileen multiple times if you listened to one of these channels for an entire day.  Why is that?  Well, it might be because a lot of music made in the 1980's really sucked.  It was so bad that we didn't like listening to it then and we sure as heck aren't going to go back and listen to it now.  Also, these stations reach back for the "popular" music that satiated the masses back in the day.  You don't hear much in the way of country, rap, jazz, blues, punk, or folk music on the 80's stations - unless of course it sold really well in the mainstream market.  There was a lot of really good music made in the 1980's that doesn't fit the mold we've cast around the idea of "80's music".   And we don't limit this form of selective memory music.  TV shows like VH1's I Love the 80's do pretty much the exact same thing with products, sports, food, fashion, entertainment...etc.

The end result is a myopically glorified and painfully oversimplified memory the 1980's as a really great, if not totally cheesy, decade.

Now think about how this school board in Colorado would have their students learn about the past.  Ordering teachers to limit their interpretation to history that "promotes patriotism" or the "positive aspects of the United States and its heritage" while downplaying all of our past imperfections can only encourage a similarly glorified and oversimplified memory of American history.

Of course, that's exactly what this particular school board wants.

But wait... I pretty much just admitted that I love the 80's station and I'd be lying if I said I didn't enjoy I Love the 80's too.  The difference is that I enjoy them as outlets for entertainment and not for any sort of meaningful learning.

History teaching should not be equated to a greatest hits compilation of mainstream music.  Much like the great (and not so great) music of the 1980's that is no longer played, there is a lot of great and not so great history that would be left out of an approach that only seeks to glorify our American heritage.  Not coincidentally, much of this history would involve women, minorities, immigrants, and those who refused conform to the norms of an imperfect society.

Even the framers of our Constitution who wrote of creating a "more perfect Union" were not immune to what Benjamin Franklin referred to as, "all their Prejudices, their Passions, their Errors of Opinion, their local Interests, and their Selfish Views". Perfection, as Franklin alluded to, is an impossible accomplishment given that those who are trying to achieve it will always possess their own imperfections.  So why pretend we're perfect when even Ben (the womanizer) knew we never were?

Even as we search for the "more perfect union" it is silly to think of American history as a steady march of democratic progress. Our history is riddled with horrible ideas, mistakes, injustices and marginalization.  Many of these we were able to overcome, and often it was because of protest or civil unrest by those who recognized wrongs and worked to right them.  Many more still remain and pretending like they don't won't make them go away.

Yet our common experiences, both joyously positive and excruciatingly negative, are what bind us together as a nation.  We can try to sweep our historical ugliness under the bed and hope nobody lifts the bedskirt, but that just leaves us ignorant and believing that things were better than they really were.

With my future teachers I call this the "Leave it to Beaver Effect".  Watching Leave it to Beaver leaves one with a soothing image of the 1950's as a time of intact families, moral purity, and ubiquitous civility.  This is probably one image that comes to mind when people reference the "good old days".  I'll wager that it isn't images of 1950's racial segregation or social stratification.  That's sanitized ignorance that shouldn't be allowed to become a school curriculum.

These events reminded me of one of my favorite coffee mugs that sports a quote from Thomas Jefferson (who said some great stuff about education when he wasn't... you know... having sex with his slaves):