A tangle of pipes, pumps and green natural gas structures catches my eye as I float down the Colorado River just below the town of Rifle. We're in the heart of Garfield County, western Colorado's gas country, and we've been seeing the telltale signs the industry all morning. We've paddled under pipelines, past drilling rigs, and even by several wells pads poised on artificial rock banks a stone's throw from the water. Although we were warned about the heavy gas development along this section of river, it is strange to see active gas wells within the historic floodplain of the Colorado.

Our flotilla of four plastic sea kayaks is growing more curious by the minute and when we pass another intriguing looking center of activity, we can't help ourselves. We pull our boats out of the water and struggle up through the thick riverside brush to the top of the bank not knowing if we're on public land or not. The hillside is cut by a thick metal pipe running down to a holding tank where four white pickups are idling. A door opens and a worker comes out to greet us. We ask permission to look around and he says it's fine. The worker, who looks to be in his early twenties, is in a collared company shirt and jeans. After asking a few questions about our plan to follow the Colorado River from source to sea, he explains that the assortment of pipes, valves and tanks around us are part of a pumping station which has been set up to transport used fluid from one drilling site to another.

"Yeah. They're recycling it for use in a new set of wells," he says pointing up the way towards the scaffolding of drilling rig a few miles away. 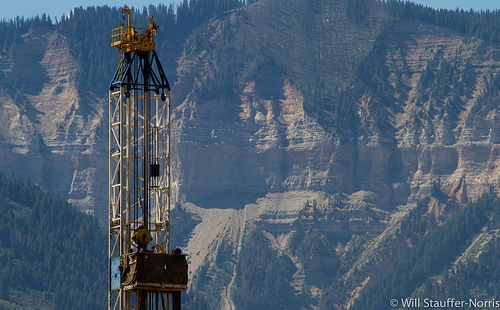 Before floating through this section, we tried to do a little research about the oil and gas industry's use of water. Along with the millions of Americans living near areas of heavy gas development, we were particularly interested in the topic of hydraulic fracturing where a mixture of chemicals and water is sent thousands of feet underground to break up the rock and release trapped gas reserves. But finding reputable information is not easy.

Fracking, like any truly controversial topic, has developed the tendency to repel stable facts with magnetic force. Seemingly simple questions produce wildly different answers depending on who you ask. For example, how much water does the natural gas industry use in Colorado? According to the Colorado Oil and Gas Association, 0.13 percent of the state's water use will go to natural gas production in 2012. Their Water Use Report states: "Colorado's oil and gas industry is committed to minimizing our water use and maximizing our recycling," which sounds reasonable and relatively low impact. And then we hear the other side. According to an independent study from Western Resource Advocates, each new well takes five million gallons of water. Fracking uses enough water annually to supply up to 296,000 people for an entire year. Citing a range of figures for possible water consumption, the report translates the industry's use to its municipal equivalent. "On the low end, that's slightly more than the population of the city of Lakewood (Colorado's fourth-largest city). On the high end, that's similar to the entire population of either Douglas, Boulder, Larimer or Weld counties." When the situation is described that way, the impact of gas development no longer appears to be so benign.

Or how about the risk fracking poses to the quality of our rivers, streams, and drinking water? A typical answer from the oil and gas industry will emphasize safety, explaining that current technology is capable of completely sealing off well casings from any contact with underground water supplies. But when homeowners living near drill sites find that their wells have been contaminated or, in some instances, that their tap water is suddenly flammable, the industry's constant assurances seem less comforting.

There is one thing that's agreed upon, however. Any water used for drilling or fracking, even if it's recycled a few times, is eventually taken out of the water cycle for good. While much of the water used in cities or for agriculture is capable of being returned to the rivers and reused downstream, water used for fracking is far too polluted. The only safe way to dispose of it is by pumping it deep underground. Fracking is a 100 percent consumptive use.

It was just this used, polluted water that we saw being pumped to the new drill site alongside the Colorado River. The friendly worker explained that the four running pickup trucks, each with one or two men inside, were posted to this site on 12 hour shifts. Their assignment: to watch the pumping facilities and to make sure everything was working properly. A spill of the toxic fracking fluid here, on the banks of the river, could mean a devastated fish and insect population, poisoned crops and problems with city water systems supplying 25 million people between Garfield County and San Diego. The added precautions made sense, but the parked trucks raised the question of why there were pipelines and wells so close to the river in the first place. As it turns out, fracking was exempted from the Safe Drinking Water Act in 2005, and there are few regulations in place for riverside gas development in Colorado. Wells are being built on riverbanks because there are no rules to prohibit it.

The photographers on our crew took out their cameras to begin documenting the site. We'd been talking with the pumping station attendant for over five minutes, but as soon as we began photographing, another man came out from his truck and informed us we were on private property being leased to Haliburton. One photo was snapped covertly before we got back in our kayaks and paddled down past more drilling rigs and well pads. 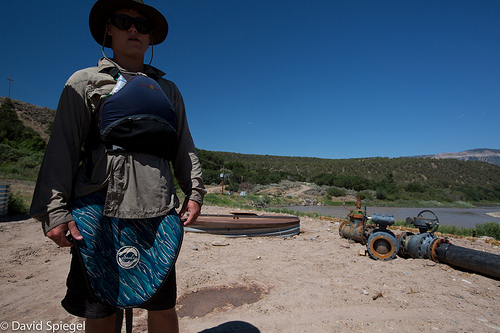 A few days before, we'd met with Tresi Houpt, the former Garfield County Commissioner and Colorado Oil and Gas Conservation Commissioner. Houpt, who has had over 10 years of experience working with energy policy on the county and state levels, told us that for most of these controversial questions, both sides are probably telling truths. While drilling only uses a small percentage of the state's water, the figures are quite large when they're put in the context of a river system that's already over-allocated (the Colorado River has not connected with the sea for well over a decade, for example). Current technology is indeed capable of making the drilling process safe, she explained, but that doesn't mean it's always implemented correctly. Houpt cited a number of situations where residential wells or streams were polluted by oil and gas activity, stating that, "the water contamination issues that we've seen throughout Colorado have been as a result of human error, not technological error."

While the industry constantly refers to an ideal situation that is safe on paper, Houpt points out that

there's a great deal of human error that goes along with any industry or anything we do in this world; we're imperfect beings. I think we need to be very aware of where and how we allow oil and gas development to proceed because of the likelihood of some kind of contamination that could occur. There just aren't guarantees.

Natural gas has been hailed as a "clean bridge fuel" and, although it releases less greenhouse gas emissions than other fossil fuels, Houpt is wary of letting the industry regulations remain so lax. "It's important to recognize that we have this tremendous resource available to us in Colorado," she said, "but we should only develop it if we can protect public health, safety, welfare, the environment, and wildlife. If we fall short on that, then we really can't call natural gas a clean fuel."

For more information on the expedition, please visit www.downthecolorado.org. 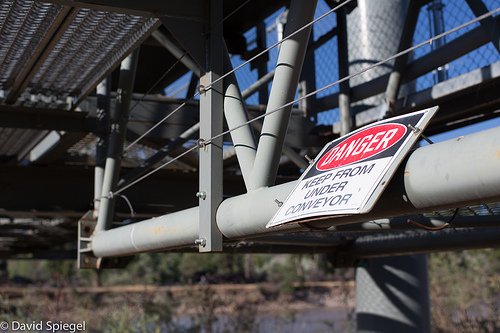